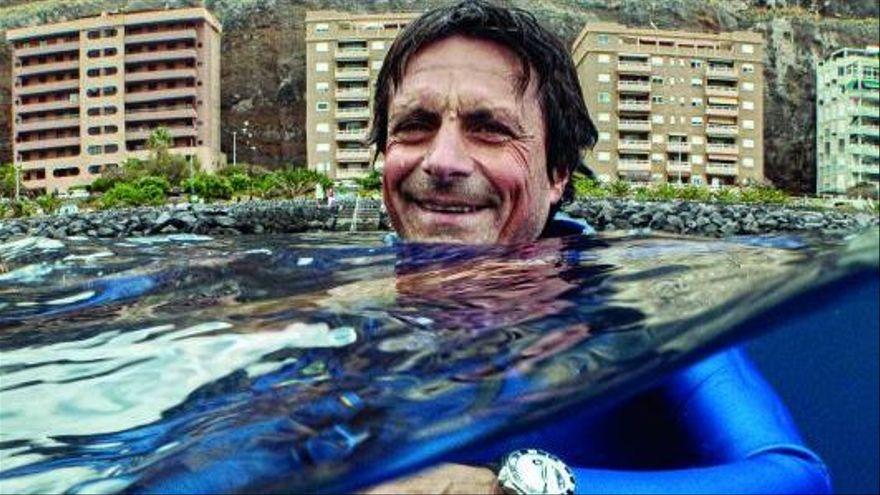 A moment of filming. NDG CINEMA

The production company NDG Cinema has included this part of the Tenerife coast between different amazing corners of the world to film one of the chapters of this documentary series based on extreme sports. The other places where the team has passed are French Polynesia, New Zealand, different parts of the Mediterranean, the Arctic Circle, Mexico or Portugal. «Tenerife has a privileged nature. That is why I have come many times. I am a wild animal, which is why I feel so comfortable on the Island », admits Davide Carrera.

A moment of filming. NDG CINEMA

The film crew stayed for a week –until last Sunday– taking images of Radazul’s backdrops. In them, the king of the depths shows how he prepares to continue breaking freediving records and poses with the yoga position and artistic movements under the sea of ​​Rosario. «Tenerife’s seabeds are spectacular. That contrast of the volcanic materials give it a very special touch. When I come, I usually go to Radazul to prepare, ”says Davide Carrera, who in five months will return to the coast of El Rosario to participate in the Spanish Apnea Championship, organized by Apnea Canarias, between 3 and 5 September.

Radazul consolidates with this filming in the first world line of apnea lovers, due to the potential offered by an orography that allows very deep descents but relatively close to the coastline. The previous documentaries shot by Thierry Donard and always focused on extreme sports have had great success on digital platforms such as Netflix, which is also interested in this new five-part series, Reset. Trajectory of Life, which has passed through Tenerife.

In addition, the chapter with shots of El Rosario has as its protagonist one of the best-known divers in the world. Resident in Nerja, Andalusia, Davide Carrera descended in September 2016 to a depth of 111 meters without an oxygen cylinder, setting a world record in Cagliari (Sardinia) in the monofin modality. A year later, in 2017, it reached a depth of 114 meters. In his career, he also highlights that in 2019 he was the deepest freediver in the Spanish Championship held in Lanzarote, also in Canarian waters.

Carrera began to enjoy diving in the big blue as a child in his native Italy, almost at the same time that he would become a spiritual person, with a special predilection for yoga. At 18 he met Umberto Pelizzari, his idol, Italian freediving world record, and two years later he became his safety diver, training with him. At just 20 years old, in October 1996, he won the first World Team Championship in Nice. From there the successes follow one another: two times world champion, three world records and 15 national records.

Now he is preparing for a new world record of 132 meters in the monofin modality, while continuing to practice yoga and other meditation techniques, and tending the garden of his country house in Nerja, Malaga. «I love growing vegetables and having a rural life. Besides the sea, I also like the mountains ”, he tells the freediver. He produces his own vegetables following permaculture methods because he truly believes that the important thing is to respect nature and eat healthy. It has a piece of land on the hill, 10 minutes from the sea, with olive trees. There he enjoys free time with his 11-year-old son.

Tenerife remains among the preferred places for its preparation. That relationship between Carrera and the Island influenced the team of the documentary series Reset. Trajectory of Life chose Radazul. Soon the series will be able to be seen in the cinema and digital platforms.