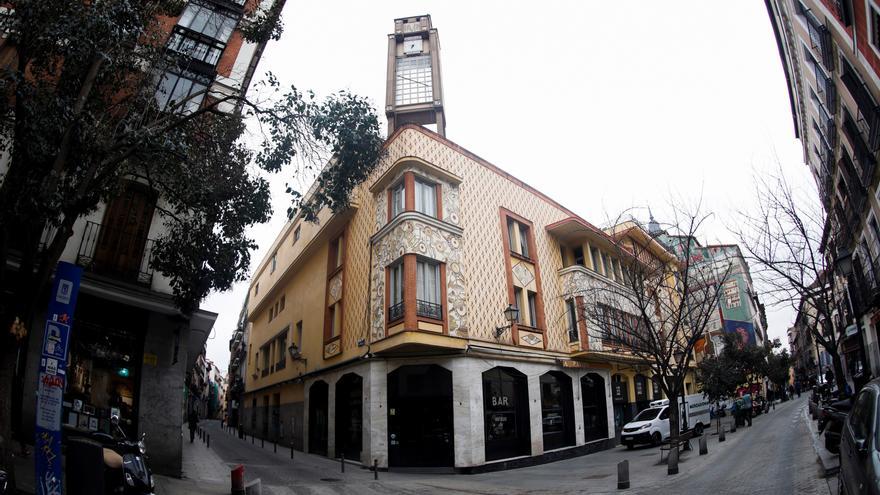 Next to the Dehesa del Navalcarbón park, in Las Rozas de Madrid, there is a curious industrial estate in which the warehouses are not warehouses for merchandise, but rather high-end shops that supply the residents of the urbanisations. There is also a Mercadona and in front of it one of those warehouses converted into restaurants or decoration. It is especially striking and stands out from the rest because it is a multi-storey block painted entirely in red and a sign above the entrance that reads: "Carnes de El Bierzo". Before, the headquarters of Leonese delights was located in Pozuelo de Alarcón, another of the most expensive towns on the outskirts of Madrid.

But the store that sells to the public is one more part of the business activity that hides that bright red. More than a dozen companies dedicated to the purchase, sale and reform of real estate have this address. The activity also expands to the purchase and sale of rural and urban land, construction, promotion, rental, exploitation of homes, commercial premises, industrial warehouses, parking spaces, plots, urbanization of land for development... And three entities destined to meat products. Despite what is presented, the main activity of the red block is the real estate business and both have one element in common: Oliver García Leo, the sole administrator of the fillets and bricks.

In the street he is known as the "butcher of León" and we have called his office in Las Rozas and his lawyer, in Getafe, but no one has wanted to speak to this newspaper to answer a simple question: what do you plan to do with the Pavon Theater A few days ago Oliver García Leo, with real estate businesses in Malasaña with the brothers Alberto and Pedro Cortina-Koplowitz, signed the purchase of 50% of the emblematic Madrid stage from Amaya Curieses. The other half is kept by the former partner of the actress and director, the actor and director Pepe Maya. They shared life and stage project in the Zampanó Teatro company.

Amaya and Pepe bought that dilapidated and abandoned building in 1999, where Pilar Miró shot the burning of a cinema in Beltenebros. Two years later, the rehabilitation of the exceptional building was already completed and the National Classical Theater Company immediately entered, which took it over as its headquarters during the 13 years that the rehabilitation of its home, the Comedy Theatre, lasted. Then came the Kamikaze company, which in 2016 successfully reopened the center with prizes and subsidies until they left Pavón on the last day of January 2021. It was impossible to maintain the project. "The last year of rent was not paid," says Pepe Maya, who until now had not indicated this non-payment; On February 28, a trial awaits them to settle that debt. Once the sad farewell was closed, Maya has returned to the programming of her space while Curieses negotiated the sale of her part.

"It's a marvelous building, but you have to take care of it and a theater is a bottomless pit," Amaya Curieses told elDiario.es During the conversation, he preferred not to mention the name of Oliver García Leo and justified the sale of his half with the promise that the new owner has done to him: "He wants to make the Pavón Theater an important center dedicated to culture. He has told me so. If it were not so, I would not have taken the step. If after 20 years of struggle, problems and tensions that I have experienced and have had to endure and resolve, if the theater were to die... I would die with it. That is why it has cost me so much to make this decision. I was very clear that the condition was that the theater would continue to live and I would be spectator of this process, because there is a very good relationship with this man. I trust him because he has endured three years until I have made the decision", acknowledges Amaya Curieses.

For three years, since 2019, when the Kamikaze company still had a program and was successful in the center, Oliver García Leo and Amaya Curieses negotiated the sale of half of the Pavón Theater. Pepe Maya assures that he was unaware of the process, although his partner encouraged him to sell and he proposed the purchase on her behalf. "Four months later I have found that it is already sold," says Pepe Maya.

"I know it may seem the opposite, but it is not a speculative operation. This man has fallen in love with the project. He says that he used to go to this cinema when he was little. He has been impregnated with my illusion, it is clear. It is true that his businesses may seem absolutely speculative, but I don't think that's the real image, that of a real estate speculator. I hope I'm not mistaken... the theater cannot die, because if it dies, I die", Curieses sentences.

"The owner of El Bierzo meats has paid 2.1 million euros for half of the property," says Pepe Maya. "Although they have come to offer three million euros, because they have appraised the building at 5.9 million euros," he adds. "Everyone tells me: 'You're dead.' Because they are going to harass me and take me down until they force me to sell them my share. Right now I am the administrator, but the future of Pavón right now is black, because they will block the property until it becomes unbearable He is a born speculator and already has half of the building," Pepe tells this newspaper. "It will be a fight between an artist against a speculator. And I am going to fight and I am not going to give up easily," warns the co-owner while the darkest clouds hang over the future of the theater.

At the top of the Lavapiés neighborhood and a step away from La Latina, on a corner that would delight those who base their business activity on promoting and exploiting lots in booming neighborhoods, this real estate sweetie built in 1925 by the modernist Teodoro de Anasagasti emerges. commissioned by Francisca Pavón and Marcos. El Pavón is one of the first buildings built under the taste art deco in Madrid and, after the recent destruction of the Real Cinema, it is the last standing example of this architect in the capital. It is a heritage landmark in the neighborhood, where locals and tourists come and go towards the center, climbing the impossible ramps of Calle Embajadores. "It has structural protection, that is, it has not been declared a Site of Cultural Interest (BIC), with the highest category of protection, but the owners cannot alter either the structure or the volumes," says Álvaro Bonet, architect and spokesperson for the Madrid association Citizenship and Heritage, dedicated to safeguarding the historical heritage of the city for more than a decade.

Does that mean the building and its use are safe? No. With desperation Álvaro Bonet indicates that the Heritage Law of the Community of Madrid does not coincide with the interpretation made by the current teams from the City Council and the Community of Madrid. "If you see the cases of intervention in buildings with structural protection, you would not believe it. The building of the old Fuentetaja bookstore had comprehensive protection and it was completely demolished. The problem is the downward interpretation made by the heritage commission. That is, if they want to turn it into a commercial gallery, with this municipal government they will achieve it," Bonet predicts.

According to the latest accounts deposited in the Mercantile Registry, the company Liberty Investment Spain had an asset of 17 million euros in 2019. The entity dedicated to real estate exploitation of which Oliver García Leo is the sole administrator continues to grow every year. Another of his companies is Soluciones Sila and in this he has 21 million euros in assets. Among the entities managed by the meat and brick entrepreneur, there is no culture. "Without a doubt, we must suspect the new owner. Let's not be so innocent. It is what it seems," says sociologist Daniel Sorando, professor of Social Sciences at the University of Zaragoza and specialist in analyzing the processes of expulsion of the population rooted in neighborhoods historical.

Sorando indicates that it is too late to fight against gentrification in Lavapiés. The process started at the end of the nineties, when the neighborhood became a cultural hive. La Casa Encendida, the Valle Inclán Theater and other cultural infrastructures that made a neighborhood that the middle class feared "habitable". "Culture has made the neighborhood attractive to the middle classes. Once they are convinced and inhabit it, culture is no longer necessary and commercial intervention is over. They are positive spaces, but we are not aware of the processes they put into The remodeling of the Pavón took place in the middle of a period of consolidation of the middle class", indicates Sorando, author of the book First We Take Manhattan. The creative destruction of cities (Cataract Books, 2016). The sociologist implies that it is too late for any hope. Culture is the advance guard until it gets in the way. It is a colonization of the identity, history and creativity of the neighborhood. Until leaving it simplified and reduced to a shopping center and a ruined past.