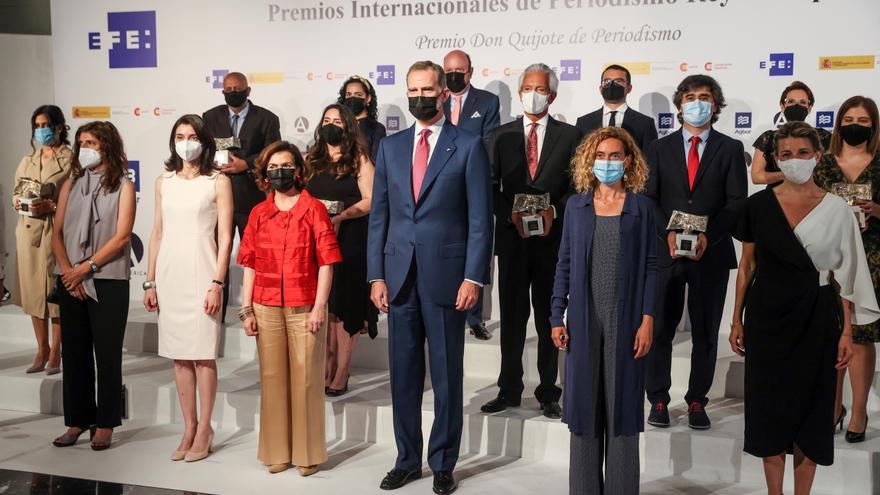 Madrid, Jun 9 (EFE) .- The commitment to the truth of Ibero-American journalism, over and above pressure, persecution and hoaxes, was recognized this Wednesday at the delivery of the King of Spain International Awards, which in its XXXVIII edition awarded the work of informants and media from seven countries, with issues related to social movements in Latin America, immigration, human rights or equality.

"Journalists are more necessary than ever" as a tool to combat false news and information saturation and for their role as a "public service" so that society has reliable and rigorous information, said the King of Spain, Felipe VI, in his speech after the delivery of the awards that, as every year, was held at the Casa de América in Madrid.

The Spanish monarch valued the winning works, in Spanish and Portuguese, which are "the pride of good journalism" and which "contribute to value and respect citizens, to give them greater visibility and to take care of democracies."

In a context marked by the immediacy that new technologies and social networks have brought about, Felipe VI stressed that "the journalistic reputation and the prestige of the profession depend on the quality of the information."

"In an environment, on the one hand, of information saturation and, on the other, of misinformation, journalists are more necessary than ever. Data verification is a fundamental pillar in the construction of certainties or in the orientation within the uncertainty" he added.

Felipe VI presaged that the pandemic will mark the future of many professions, including journalism, but he stressed that it has also shown that "the nature of the media is born for citizen service."

The variety of social issues addressed by the award-winning works this year, from informants from Spain, Colombia, Cuba, Chile, Guatemala, Mexico and Portugal, highlight that "journalism is alive" by "raising awareness, reporting, contributing to the education of societies and to ensure the values ​​of democracy, human rights and equality for women, "he said.

HUMAN RIGHTS, EQUALITY, AND COMPLAINT, AMONG THE AWARDED ISSUES

Before his speech, Felipe VI presented the Digital Journalism Award to the Chilean Tania Soledad Opazo, on behalf of her team, for "The videos of the social outbreak," a work that has as its background the social protests that took place in the country South American.

In the Cultural and Social Development category, Mexican Inger Díaz Barriga received the award for "Calladitas never again", a feminist cry that was broadcast by the Univisión Noticias network.

Jhon Torres Martínez received the Ibero-American Journalism Award for "Migrants: resist in the midst of the pandemic", a report published by the Colombian newspaper El Tiempo, a reflection of the Venezuelan diaspora to that country in an emergency situation.

Also a Colombian, the Colombian photographer Carlos Alberto Emilio Velásquez Piedrahita received the Photography Prize from Felipe VI thanks to the image "The last hug", while his compatriot Juan David Cardozo received the Radio Award for his work "Cliver Alcalá : The Venezuelan (r) general who confessed his plan to assassinate Nicolás Maduro ", a live interview on W Radio Colombia.

Also on stage were the Portuguese journalist Catarina Isabel Canelas Gonçalves, Ibero-American Special Prize for Environmental Journalism and Sustainable Development, for a report on the impact of plastic on our lives, and the Cuban Nayare Menoyo, King of Spain Television International Prize for Journalism, thanks to a production on the Cuban writer Leonardo Padura.

José Rubén Zamora, founder of "El Periódico de Guatemala", received the Outstanding Media Award in Ibero-America, and the Spanish journalist Pedro Simón, from the newspaper El Mundo, the award in the Press category for his information entitled "Hugo, story of a heart ".

The King of Spain also presented the Don Quixote Prize for Journalism to Cuban Carlos Manuel Álvarez Rodríguez for the article "Three Cuban Girls", published in the magazine El Estornudo. The award was collected by his partner in this medium, Mónica Baró.

At the opening of the event, the president of the EFE Agency, Gabriela Cañas, announced that in the next edition the King of Spain Awards for Journalism will be renewed and the number of awards will be reduced, from ten to six, to favor new areas such as that of Social, Environmental or Cultural Development, and will be destined to works that stand out for their content, regardless of the format in which they are carried out.

Cañas also highlighted "the journalism of excellence that is developed in the Ibero-American community", which is reflected in the awarded works.

He also recalled the two Spanish journalists killed by jihadist terrorism just three months ago in Burkina Faso, David Beriain and Roberto Fraile, "who taught us in life the virtues of the most daring journalism."

The awards were held for the second year with special health and safety measures, in accordance with the prevention protocol, including a reduction of the capacity from 120 to 80 people to maintain the established safety distance and the reduction of the ceremony time to a hour.

As is customary in these times, the ceremony was also broadcast "online" and live on EFE's YouTube channel.