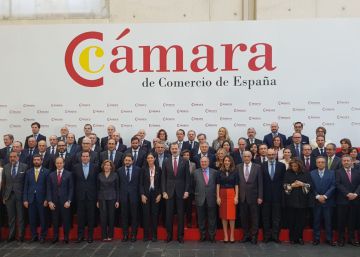 “Your contribution to the internationalization process during the latter – just when it was so necessary – has been decisive, therefore, you have contributed not only to the economic recovery, but also participated in the change of growth model,” he added.

On the formation of young people, the King has highlighted the efforts of the Chambers of Commerce to improve the employability of young people. “We have to take advantage of the talent of our youth and orient their training towards those competences and skills demanded by companies, to reduce the high rates of youth unemployment and to increase their versatility and ability to reorient themselves in the changing circumstances of the labor market.”

For its part, the Minister of Industry, Commerce and Tourism, Reyes Maroto, who has also intervened at the event, has reviewed the programs led by the Chamber of Spain and runs the cameral network, in collaboration with its Ministry, especially mention has been made of the work in favor of the internationalization of companies “because it is part of the cameral DNA”.

The president of the Chamber of Spain, José Luis Bonet, who has begun his speech thanking the King for his commitment to companies and his role as “institutional guarantor” and “best ambassador”, has referred to the three great challenges of those it depends on Spain taking a leap of progress and modernity in the next decade: adaptation to globalization, improving competitiveness through innovation and digitalization, and demographic change and youth training.

In this context, José Luis Bonet recalled the programs led by the Chamber to help companies meet these challenges. “In our capacity as an intermediate body of the European Union, we manage European funds that, through the network of chambers of commerce, reach the last corner of Spain for the development of programs aimed at internationalization, innovation, digitalization and training”.

The president of the Chamber of Spain has recalled the commitment of this institution to the progress and modernity of Spain and the well-being of all Spaniards. “We believe in the value of unity and cooperation and assume the message” Spain cannot be one against another, but must be for everyone and for all “as the inspiring principle of our action. We are with you, count on us, ”he concluded.