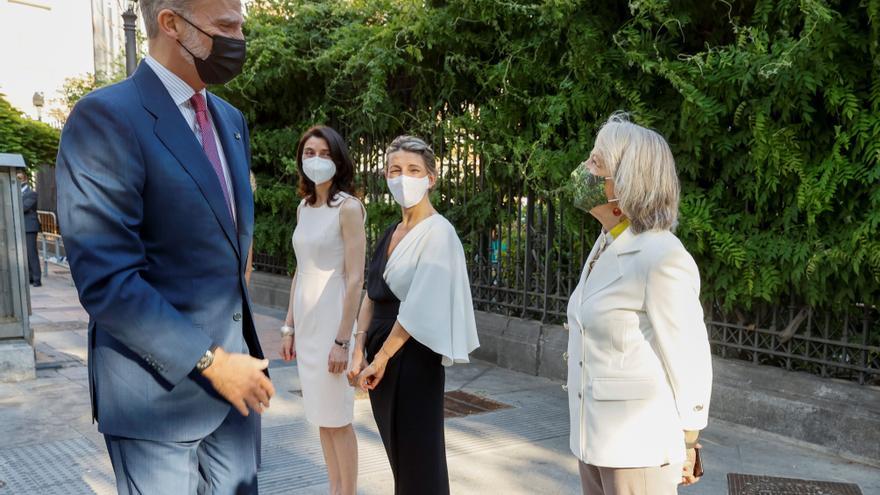 The King remarked this Wednesday that "journalists are needed more than ever" as a tool for combat fake news and information saturation and for its role as a "public service" so that society has reliable and rigorous information.

Philip VI has presided over the delivery ceremony of the XXXVIII edition of the King of Spain International Journalism Awards, held at the Casa América in Madrid, in which the written, audiovisual and digital work of journalists from various Ibero-American countries on issues such as immigration, human rights or equality has been recognized.

Some works in Spanish and Portuguese that, in the opinion of the monarch, are "pride of good journalism" and that "contribute to value and respect citizens, to give them greater visibility and to take care of democracies" by being stories "sometimes heartbreaking, but also full of hope."

In a context marked by the immediacy that new technologies and social networks have fostered, the King stressed that "The journalistic reputation and the prestige of the profession depend on the quality of the information." "In an environment, on the one hand, of information saturation and, on the other, of misinformation, journalists are more necessary than ever. Data verification is a fundamental pillar in the construction of certainties or in the orientation within the uncertainty" , the King has reflected.

"In an environment of information saturation and misinformation, journalists are more needed than ever"

The DNA of journalism, he continued, is in the verification of data, in the search for reliable sources that detect hoaxes that, frequently, "spread much faster than the truth."

For the head of state, the battle against fake news or decontextualized videos that are disseminated through the networks "make it increasingly difficult for the media and citizens to verify their veracity."

For this reason, he has emphasized that useful and public service information "becomes more necessary if possible" to help them form a criterion in a responsible manner.

Felipe VI has presaged that the pandemic will shape the future of many professions, including journalism, but it has also shown that "the nature of the media is born for citizen service."

The prizes awarded since 1983 by the EFE Agency and the Spanish Agency for International Development Cooperation (Aecid) have been awarded this year to reporters and the media from seven Ibero-American countries (Spain with one prize, Colombia with three, Cuba with two, and with one Chile, Guatemala, Mexico and Portugal), out of a total of 175 candidacies.

In the King's opinion, the variety of social and environmental issues addressed highlight that "journalism is alive" by "raising awareness, denouncing, contributing to the education of societies and safeguarding the values ​​of democracy, human rights and the equality of women ".

The digital transformation is assuming a change in the way of reading and understanding, which is why Don Felipe has considered it essential to help young people to develop "their critical spirit, their freedom of thought and expression based on knowledge and values basic principles of coexistence in democracy ".

The ceremony was attended by the First Vice President of the Government, Carmen Calvo, and the third and titleholder of Work, Yolanda Diaz, as well as the president of Congress, Meritxell Batet, and that of the Senate, Pilar Llop.

Also present were the Ibero-American Secretary General, Rebeca Grynspan, the Secretary of State for International Cooperation, Ángeles Moreno Bau, and the president of EFE, Gabriela Cañas, as well as the ambassadors of the countries of the winners.

The King of Spain International Journalism Awards, as well as Don Quixote, which celebrates its seventeenth edition, recognize the informative work of journalists and media from Ibero-American countries and with which Spain maintains historical and cultural ties.

Don Felipe, who has presided over its delivery since 2015, stressed that having reached the 38th edition shows that it is "a well-established project".

He has praised the role of EFE and its professionals for "having guaranteed the right to information in the hardest moments" of the health crisis "and maintaining the same levels of quantitative and qualitative information.

I remember for David Beriáin and Roberto Fraile

He has also had a memory for journalists killed in the exercise of the profession and, in particular, to David Beriáin and Roberto Fraile, shot at the end of April in Burkina Faso in an ambush.

The King of Spain International Journalism Awards, sponsored by the Suez industrial group, are endowed with 6,000 euros and a sculpture by the artist Joaquín Vaquero, while the winner of the Don Quijote award receives 9,000 euros and a statuette of Xema Teno.