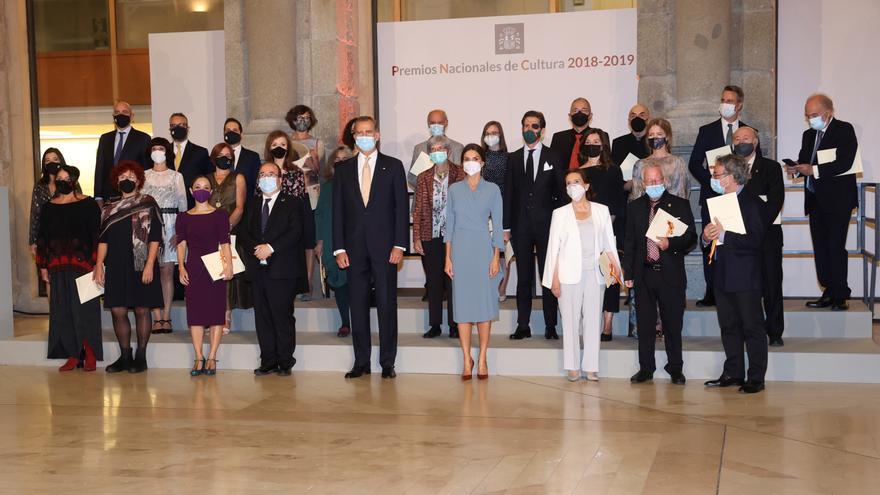 The king thanked this Tuesday the role of accompaniment that the creators and artists played during the months of confinement of the pandemic, in which he highlighted that in addition to being a facet that “enriches” society, it “unites” it and is “necessary to live”.

Philip VI, Next to the Queen Letizia, has presided over the ceremony of the National Culture Awards for 2018 and 2019, that had to be postponed due to the crisis of the coronavirus.

The Cloister of the Jerónimos of the Prado Museum in Madrid has been the scene of the delivery of the diplomas that each year is awarded by the Ministry of Culture and Sport to recognize personalities from different cultural and artistic fields.

Some awards, divided into 30 categories, which for Felipe VI represent “the gratitude and recognition” of Spanish society through its institutions.

“The arts, letters, creativity, technique and cultural industries make us better and they bring us wealth and growth. Culture, in short, makes us great as a society and gives us prestige as a country, “said the monarch.

In the king’s opinion, the creators were decisive when it came to accompany citizens during the most difficult times of the pandemic.

“Spanish society understood that there is a stronger bond between it and culture than we imagined. Because culture enriches us, yes, but it also unites us. Is always necessary and even more so in circumstances such as those we have experienced in the last year and a half. We needed it then and, ultimately, we need it to live “, he valued.

The fact that the National Culture Awards ceremony could be held again means, in the king’s understanding, that “culture doesn’t stop” and that, regardless of its artistic and intellectual value, “attracts tourism, resources and wealth.”

He took advantage of the event to congratulate himself on the declaration of the axis of Paseo del Prado and Retiro Park in Madrid as Unesco World Heritage, granted on July 24.

“A focus of art, history and science that treasures deposits of creativity in the center of our capital. As Spaniards, we must be very proud of it “, has emphasized the head of the State on what he has defined as” an axis of extraordinary cultural value “.

Among the winners of the 2018 and 2019 National Culture Awards are the writers Almudena Grandes and Bernardo Atxaga, the actress Julieta Serrano, the graphic humorist “Peridis“, the journalist Victoria Prego, the bullfighter Juan José Padilla, the designer Adolfo Dominguez, singer Bad rodriguez, RTVE or the Restoration Area of ​​the Prado Museum.

Antonio Ruz, National Dance Award 2018 and Anna Caballe, of History of Spain in 2019, have intervened on behalf of all of them.

“We have resisted”, has assured Ruz, who has claimed that “the culture of a country begins with education.”

After joining the praise Due to the role that the creators developed during the health crisis, the Minister of Culture and Sports, Miquel Iceta, has proclaimed that 2022 should be “the year of cultural renaissance in Spain.”

“Society demands culture and you have all the potential, desire and talent to provide it, “added Iceta.

The ceremony was attended by former ministers of Culture such as Carmen Calvo and José Guirao, as well as the president of the Prado Museum Board of Trustees, Javier Solana, among other authorities.

Before taking the family photo with the winners with which the act was closed, the kings visited the exhibition “The prodigal son of Murillo and the art of narrating in the Andalusian Baroque”, premiered last week at the Madrid art gallery.