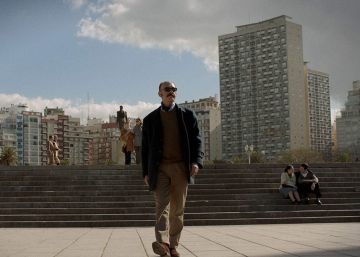 The moral fall of an individual in the context of a microcosm crossed, from beginning to end, by darkness and corruption is the essential matter of which black cinema was nourished as a film genre incubated during the Depression years, but high A keynote address in the forties, when, in the words of David Thomson, it worked "in response to the concentration camps, the discovery of torture and the happy world after Hiroshima." Time eventually proved that gender functionality could not only be applied to the American context: its universality allowed the mold to be applied to the pathologies of every post-industrial society. Red, third solo feature by Buenos Aires Benjamín Naishtat, collects the heritage of the genre as exemplary as little mimetic to explore the underground currents of mute and complicit silence that led to Videla's Argentina.

Far from approaching an annoying noir-style exercise, Naishtat opts for the disconcerting option of filling his film with anachronistic stilemmas – from the design and cadence of credit titles to the frozen image as a punctuation mark – that does not make it a Postmodern pastiche, but they disguise her as an improbable thriller buried in the desert, during a long night of the 70s, to be rediscovered in our present, as a time capsule betrayer of a generalized guilt.

Claudio (Dario Grandinetti) is charged with the guilt of a violent encounter long before accepting and managing an obvious stain in his professional file. The way in which history dilates the fit of the pieces of his narrative puzzle and the spectacular composition of Alfredo Castro as a television detective sow false clues that amplify the strength of that final look on a world where decency has been kidnapped.