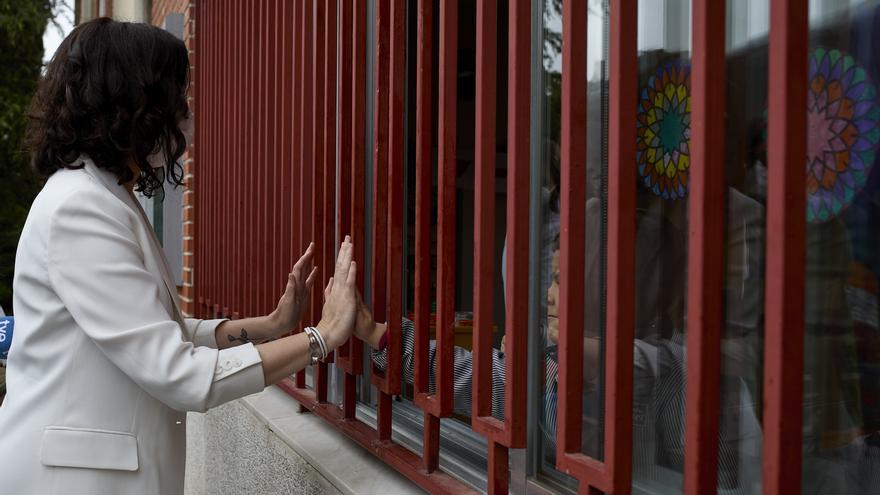 The Master Law of Educational Freedom of the Community of Madrid, with which Isabel Díaz Ayuso intends to “shield” concerted and special education in the region “against” the Organic Law of Modification of the LOE (Lomloe), popularly known as Celaá Law by the name of the Minister of Education who promoted it, has passed its first procedure on Thursday in the Madrid Assembly. The regional Executive considers that this state regulation undermines both educational modalities and the freedom of choice of center, something that the Madrilenian president has made flag in recent years and that she says “protect” with this regulation.

The votes of PP and Vox have prevented the total amendments presented by the left from prospering this Thursday in the regional plenary session, with which Más Madrid, PSOE and United We Can seek to return to Puerta del Sol – headquarters of the autonomous government – the text with the one that Ayuso seeks the usual train crash with the Government of Pedro Sánchez.

With the slamming of the total amendments of the left, the Master law takes another step and passes its first parliamentary process until it reaches the Plenary again, predictably next December, for possible final approval. The rule now goes to committee so that the partial amendments of the parliamentary groups, which have until this Friday to present them, are debated in this body. Once debated, the right with its majority will decide which ones are integrated into the original text and which ones – those that decline in committee – go on to be debated in the Plenary in which their final approval will also be voted, so the text can still be modified.

The PP needs at least the abstention of Vox to carry out its autonomic law and, although the extreme right formation shares the objective of combating the state regulation, its spokesperson Rocío Monasterio warned this week that its support will have a price. Vox has already presented 44 amendments to the law, among which it claims the parental veto –which it now calls “conscientious objection” of parents–, free education at all ages –both for public and concerted education– and the installation of Spanish flags in classrooms. It also implicitly calls for the elimination of the bilingual program promoted by Esperanza Aguirre.

The Madrid president flatly rejected these demands from the extreme right on Thursday. Ayuso argued during the control session in response to Monastery that the conscientious objection proposed in Education through the parental veto “dynamite” the relationship between the teacher and the student. The Madrid president also rejected the imposition of the placement of Spanish flags in the classrooms. The regional government does not join the total gratuity either, a measure that amounts to 760 million euros.

For its part, the left criticizes a norm that it considers “unnecessary” and “legally inconsistent.” Both Más Madrid and PSOE and Unidas Podemos have accused the regional government of deepening the “segregation” of students and undermining public education.

In the 22 years that it has held the powers in Education, the Community of Madrid has never seen it necessary to pass its own educational law, as other communities have done. Until now, as a result of the approval of the new national educational law, the Lomloe, that the Master Law proposes to combat. It is specified by the text itself at its start: “The present law (…) aims to guarantee an educational system in accordance with the Constitution and with the exercise of freedom of choice of school, contained in its article 27, taking into account takes into account the demands of society (…) “.

To achieve these objectives, the law proposes several measures that go in the opposite direction of the Lomloe. The one known as the Celaá Law dedicates a good part of its articles to reinforcing the public school against the concerted one, with measures such as eliminating the expression “social demand” introduced by the Lomce to justify the construction of subsidized centers; guarantee the offer of places with the surname “public”, not arranged; o ensure an “equitable” distribution of students so that the least favored in public schools and the most favored in concerted schools are not concentrated, as it happens now.

The Master Law begins by specifying in its article 5 that students “have the right to a school place supported by public funds”, a definition that includes the concerted school. In article 7 it specifies: “The Community of Madrid will guarantee in any case the existence of sufficient places for the teachings declared free by law, taking into account the existing offer of concerted public and private centers”.

This formula contradicts the Lomloe, which leaves this guarantee specifically in the hands of public centers and that It was written specifically thinking about the policies that the Community of Madrid has been developing. Furthermore, Lomloe adds: “The educational administrations will promote a progressive increase in school positions in the network of publicly owned centers.”

In 2013, José Ignacio Wert included the term “social demand” in Lomce to justify the construction of subsidized centers where there are no school places (new urban developments, etc.). This “social demand” was calculated on the basis of which centers the families enrolled in; if many did it in concert, it was deduced that there was a demand for concerted, if they did it in public, the other way around. The trap This formula is that in new neighborhoods, for example in Madrid, where new places are needed, there is usually more concerted than public school, with which families enroll in concerted schools, giving the feeling that there is demand for these , justifying the construction of new centers. The whiting that bites its tail.

Lomloe withdrew this expression, which had never existed before the Wert law, and now Ayuso recovers it in his Master law when he talks about guaranteeing the supply of places, which will be done considering this “social demand”.

Another of the measures almost specifically Madrid and related to the previous section. In the last 20 years, plots in the community have usually been assigned to subsidized educational centers, existing or to be carried out, a practice that until the Lomce of José Ignacio Wert was approved in 2013 was prohibited by law. It never mattered to the regional government, which before it was legal, gave at least 45 parcels for this purpose. Wert would give a letter of nature to this practice in his law.

The Lomloe is now trying to mitigate it. Although an express prohibition was not included, the concept of “social demand” was eliminated from the law to justify the construction of new subsidized centers and the offer of places with the public network is guaranteed.

The Master law also goes against this idea. Not only does it recover the expression, but in article 7.3 it specifies that “the Community of Madrid may call public tenders for the construction and management of concerted centers on public endowment land”.

In its attempt to limit the concerted school and play by the same rules as the public one, the Lomloe establishes that students with special educational needs – more difficult and therefore expensive to attend because more teachers are needed – will be distributed equitably throughout the network supported with public funds, including private charter schools. Celaá law says: “Particularly, [las administraciones] they will ensure the balanced presence of students with a specific need for educational support among the centers supported with public funds in their field of action “.

Ayuso eliminates this requirement of proportionality. The Master Law is limited to saying: the competent counseling in education must “guarantee adequate schooling for students with special educational needs, taking into account the supply of school places in centers supported with public funds.” Madrid has more students with special educational needs enrolled in public school than the national average (3.3% per classroom compared to 3%), but less in concerted schools (2.8% in Spain, 2.3% in Madrid).

The Lomloe also introduced measures to avoid, or at least mitigate, the establishment of private schools that segregate their students by sex. At first, there was talk of prohibition, but finally the rule lowered it to this formula: “In the processes associated with obtaining and maintaining concerted units, priority will be given to centers that apply the principle of coeducation and do not separate students by your gender or sexual orientation. “

The Master Law establishes in Article 5 that “the admission of students or the organization of education differentiated by sex does not constitute discrimination, as long as the teaching they impart is carried out in accordance with the provisions of Article 2 of the Convention relative to the fight against discrimination in the field of education, approved by the General Conference of UNESCO on December 14, 1960 “.

In the section relating to concerts of the future Madrid law, it is only specified that “private centers in the Community of Madrid that offer education declared free by said law and meet schooling needs will be eligible for the concert system.”

The Lomloe also establishes that the communities must establish areas of influence for public and subsidized centers, “in such a way as to ensure the effective application of the priority criteria of proximity to the home or workplace.” The idea behind this provision is for students to organize themselves according to their place of residence to prevent the more affluent families from choosing the ones considered to be the best schools, taking advantage of the greater mobility facilities they usually have.

In Madrid, years ago Esperanza Aguirre established the single district in the entire community, one of the measures that makes the region the second most segregated in Europe, only behind Hungary. Ayuso now consolidates this unique district by law. “The Community of Madrid guarantees that the freedom of choice of the families of schools supported with public funds can be exercised throughout the territory of the Community, by establishing criteria that do not limit admission by place of residence,” it reads .

Ayuso has considered it necessary to establish by law “the right to receive teachings in Spanish” in Madrid, as the vehicular language of Spain. This formulation, in a community without a co-official language, responds to the fact that the Ministry of Education withdrew from the Lomloe that Spanish is the vehicular language of education, a formula that on the other hand had never existed until it was introduced by Wert in 2013 in the Lomce . The opposition sarcastically wonders if this phrase means the end of the bilingual program in the community, widely spread throughout the system and criticized as a segregator.