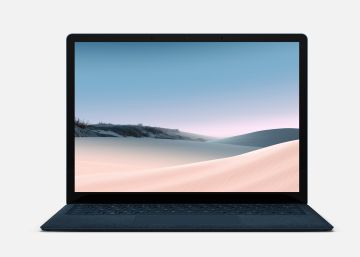 When at the end of 2012 Microsoft He presented his first Surface tablet, he did it with a very clear objective: to create a product to get the most out of his software; something very similar to what Apple does with its devices. So the basis for its functions is in the operating system Windows 10, installed in a very clean version (without third-party programs) and with all its options: from trial versions of its very popular Office 365 office suite to biometric recognition systems.

The new generation of this family is made up of several teams, including the Surface Pro 7 and Surface Pro X convertible models, and the Surface Laptop 3 protagonist of this analysis.

Surface Laptop 3 is a high-end device (part of 1,149 euros) and it shows right out of the box: it shows a very elegant aluminum finish, a construction that conveys a sense of durability and a very thin and quite light chassis for its dimensions It is also modular: It is not that it can be disassembled to choose the components, but it does facilitate the replacement of the SSD hard drive, so it will be easy to increase the capacity if necessary.

Its size is the most important novelty: it is now available with 15 inches in addition to the previous 13.5

Its size is the most important novelty: it is now available with 15 inches in addition to the previous 13.5. With a resolution of 2,496 x 1,664 pixels, it has an aspect ratio of 3: 2 that makes it ideal for tasks related to productivity. However, this format does not benefit during multimedia playback or in games, since when displaying contents with panoramic format, black frames that are too wide are created above and below the image. It is also tactile: a feature that we have not given anything of use considering that it is not a convertible model. The sound, meanwhile, is not bad at all. Even when listening to music without using additional speakers and the result is at least acceptable. It is accompanied by a very comfortable and very quiet keyboard and a good size crystal trackpad very soft to the touch and responds well.

The return of AMD

Its data sheet surprises a fact: the 15-inch model ignores Intel processors and, nevertheless, bets on a unit designed together with AMD – the AMD Ryzen 5 Surface Edition in the analyzed version, although there is a higher one – which, accompanied by 8 GB of RAM, offers a very fluid use. The only exception is very demanding programs in terms of graphics (including games). The reason is that this processor has an integrated and non-dedicated graphics module, which greatly limits its performance in this regard.

Here begins the improvements section. For example, it is very short in terms of connections. It incorporates a USB port type A and another type C and a headphone jack. That's it. Neither a card reader, nor HDMI, nor a greater number of USBs … Not even the integrated type C is compatible with Thunderbolt. There is one more connector on the power supply to charge another device at the same time.

Its autonomy is also adjusted: the firm estimates the battery life at 11.5 hours and during our tests, in which we have used it as the main work team, it arrived very quickly at the end of the working day (about 8 hours) . It has fast charge, so in an hour we have 80% charge again, but it is not comfortable to use it during the process. And it is that when it is plugged into the current and the metal surface is touched, the vibration of the energy entering the device is felt; something normal for the charging system used and without negative consequences according to the firm, which in the day to day is quite rare.

Surface Laptop 3 is a very good laptop, although after the test we have a bittersweet taste: Microsoft has missed the opportunity that 15 inches give it to create a round team that faces large competitors of the high range: the main one Apple Macbook Pro, but also Windows operating system models such as the Dell XPS 15 or Lenovo ThinkPad X1 Carbon, among others.