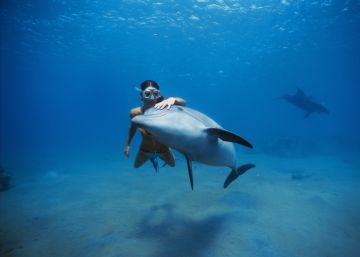 The average life of a mouse is two years, that of a human 90, that of a dolphin 17. No one knows very well why. Until now, factors such as body size – larger animals tend to live longer – or heart rate and metabolism have been studied. Now, a team of Spanish researchers says they have found another factor that more accurately predicts how long or short the life of a species will be. The key is in the telomeres that are in the nucleus of each of the cells of a living being.

"We have discovered that only by knowing the speed at which telomeres shorten can we predict with great reliability the longevity of a species," he explains. María Blasco, director of the National Center for Oncological Research (CNIO) and principal author of the study, posted today in the magazine Proceedings from the National Academy of Sciences of the United States.

The telomeres they are a protective element of the chromosomes, the fundamental structures that store and preserve the genetic information that an individual needs to live. Each time one of its cells divides to generate a daughter, the telomeres become a little shorter. The exaggerated shortening of these protective tapes is associated with diseases and premature aging.

Everything would fit if it were not for a fact that until now had no explanation: having very long telomeres is not associated with a longer life. The telomeres in each of the cells of a mouse measure five centimeters, while those of humans just 4.3 millimeters, explains Blasco. However, humans live 30 times more.

"We are facing one of the determinants of longevity that is probably universal," says María Blasco

Blasco's team has compared the speed of telomere shortening in nine species of mammals and birds. Researchers have analyzed specimens of several ages from each one to calculate not the length of their telomeres, but the speed at which they shorten with the passage of time. The results show that the rapidity with which this genetic material is consumed predicts the half-life of each species.

The work details that mice lose 7,000 base pairs – telomeric units – per year, whereas in a human the speed is 100 times lower. The work presents a pyramid of life expectancy based on the rate of degradation of telomeres that is crowned by humans, the longest analyzed species and the one that also has the shortest speed of shortening. They are followed by elephants of sumatra (60 years of half-life), flamingos (40), griffon vultures (37), Audouin's gulls (21), dolphins (17), goats (16) reindeer (15), and mice (2) , long those that more quickly consume their protective genetic material.

"No study had analyzed the speed of shortening in so many species like us," says Blasco, whose team has been nourished by blood samples from animals at the Madrid Zoo as well as gull blood from the Ebro delta collected by biologists. "We are facing one of the determinants of the longevity of the species that is probably universal, given that it is conserved from mammals to birds," says Blasco, who also heads the telomeres and telomerase group at CNIO.

Scientists have been looking for genetic and environmental keys for extraordinary human longevity for decades, such as Jean Calment, the human who lived more years (122), or animals, like the clam of Iceland (507). Joao Pedro de Magalhaes, a researcher at the University of Liverpool and a specialist in studying the genetic factors of longevity, believes that "this is a very interesting study, although what we would all like to see now is that the same is confirmed in a greater number of species. " "It will be especially interesting to confirm if animals that go outside the norm for having exceptionally long lives despite being small, like some bats, which reach 40 years, or the bald mole rat, who lives 32 years, also lose their telomeres in slow motion, "he adds.

The researcher points out another important question to answer. "For now, it has only been shown that there is a correlation between telomeres and longevity, but not causality. This new key may be a cause of premature aging or just a consequence of it, such as graying hair. That's why this work opens a new interesting field of study, "he says.

In 2009, Elizabeth Blackburn, Carol Greider and Jack Szostak won the Nobel Prize in Medicine for discovering telomeres and telomerase, the protein that rebuilds them when they have become too short. But lengthening the telomeres or slowing down their deterioration can have very dangerous side effects, so for now there is not a single drug based on this molecular mechanism that has proven to be effective or safe, "Blackburn explained last year to EL PAÍS . His advice to reduce the impact of external factors on telomeres is simple: "sleep well, eat well, have a good attitude, do not smoke, do not drink too much, eat a Mediterranean diet and exercise. "