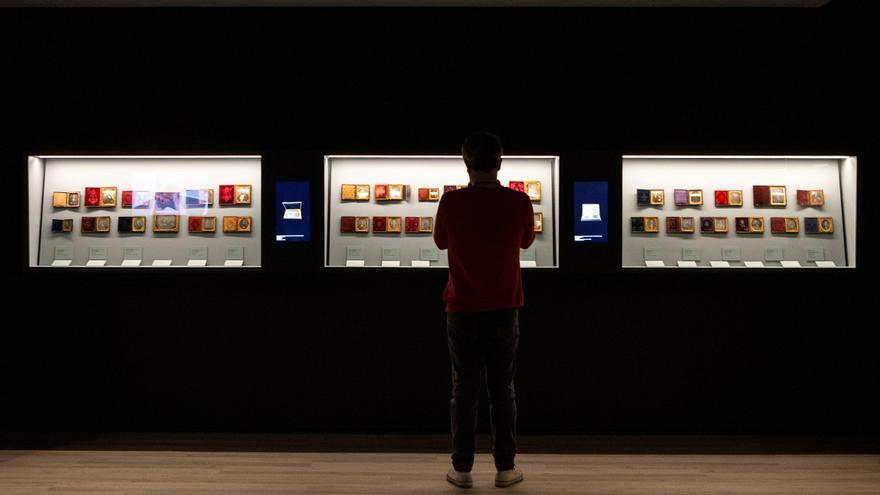 Barcelona, ​​Feb 28 (EFE) .- The KBr Center of Photography of the Mapfre Foundation in Barcelona evokes in the exhibition “The Captive Look” the origins of photography through more than a hundred daguerreotypes from the 19th century, belonging to the Center Research and Diffusion of the Imaging (CDRI) of Girona.

The CDRI was founded in 1997 with the aim of making known, protecting, promoting and disseminating the heritage of the images of the city of Girona, as well as presenting the technological evolution of the photographic object, which implies a knowledge of the main procedures of photography throughout history.

At present, its collection is made up of daguerreotypes, ambrotypes and tintypes that come from two large groups: the Ángel Fuentes de Cía Collection, made up of 131 images by this Navarrese photography curator; and that of Joan Basseda Casas, a jeweler and collector from Vallvidrera (Barcelona), which consists of 87 images.

Ángel Fuentes expanded his knowledge on both shores of the Atlantic and established himself as a world figure of the first order in the world of daguerreotype, in addition to being a character closely linked to the city of Girona.

The exhibition shows a selection of daguerreotypes from his collection, dated between the 1840s and 1860s, some of them restored by the Mapfre Foundation for the occasion, and among which the quarter-plate format predominates (8.3 x 10.8 cm) and the sixth plate (7 x 8.3 cm). Two 8 x 17 cm stereoscopic plates are also on display.

The typology of Daguerrean boxes present in the exhibition is also diverse, since, as Joan Boadas, curator of the exhibition together with David IGLESIAS explains, “there are wooden ones with leather covers and there are thermoplastic”.

The internal bearings, made of silk or velvet, have the function of expelling the air when the box is closed.

In addition to this type of encapsulation, which is the most characteristic of the daguerreotype in the United States, the exhibition also includes the European or French system, which consists of an open frame in the style of those used for paintings.

According to Boadas, the content of the daguerreotypes mainly shows studio portraits: individual, in pairs or in a group, almost always with a serious face, and two examples of post-mortem portraits -in one the mother holds her deceased son-, while the two images in stereoscopic format reproduce sculptures.

The authorship of some of these pieces has been identified thanks to the inscriptions contained in the frames, but generally the name of those portrayed is not known, except when the images have some annotation attached.

The exhibition, which will be open to the public until May 23, is completed with objects and tools related to this photographic technique from the Girona Film Museum collection: a box containing a daguerreotype laboratory, another in which They store the different liquids for the process of developing and fixing the daguerreotype image or lamps from photographic laboratories.

The role of the press was decisive in assessing the importance of an invention like Daguerre’s, capable of making permanent the “fugitive” images of visible reality; and all the newspapers, including the Spanish ones, were publishing the news that arrived from Paris on the advances of the daguerreotype since it was announced in 1839.

While in other European countries its dissemination was usually carried out by daguerreotypes, in Spain young scientists in training were interested in the invention, who between 1829 and 1841 put the procedure into practice and even improved it.

Scientists such as Pedro Felipe Monlau, Eugenio de Ochoa, the first translator of Daguerre’s book, and the professor of Pharmacy Juan María Pou y Camps, author, along with two other scientists, of the first daguerreotype experiment in Madrid, after which the had performed in Barcelona on November 10, 1839.

Those portrayed had to be as still as possible so as not to be moved in the final image; the wait could last up to 25 minutes and for this the daguerreotypeist fixed the neck to a headrest that then did not appear in the portrait. Fortunately, the exposure time was reduced over time to less than a minute.

One idea of ​​the popularity of the invention is that “between 1839 and 1860, 30 million daguerreotypes were made in the United States,” says Boadas, although a minute compared to “the more than 3,000 million photos that are taken today every day with the mobile in all the world”.