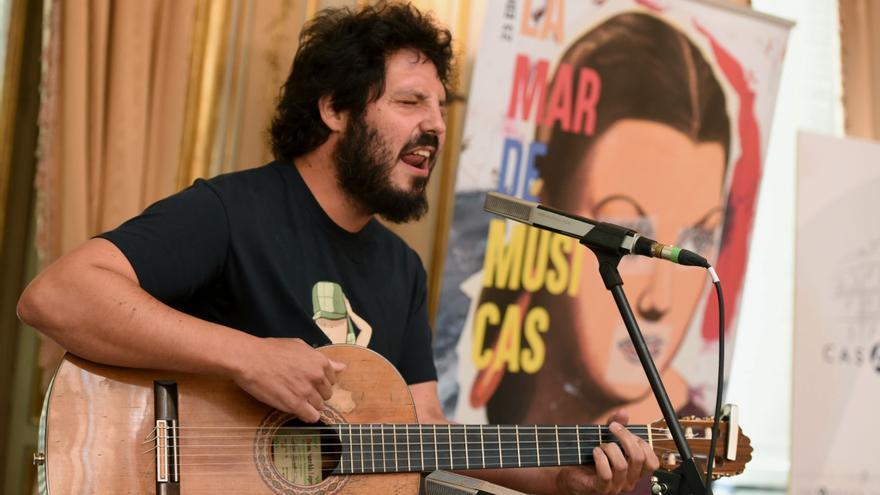 Zaragoza, Jun 4 (EFE) .- The Kanka has become this Friday night for almost two hours in something similar to a sorcerer who, with his music, has aroused the sincere affection of the public that has come to the Mozart room of the Auditorium from Zaragoza, in a concert with which he has reviewed the great themes of his career.

The singer from Malaga, who has made a stop in the Aragonese capital during his El Payaso tour, has found himself in the city with a full stalls, which was already awaiting his arrival with anticipation before going on stage.

However, it was not only the desire of the public that allowed the singer to succeed in the venue, but the 18 songs that completed the recital and the affection that he also expressed towards his followers have completely captivated the audience.

After six minutes after nine o'clock at night the performance began, when the Kanka came out with his guitar on stage, accompanied by a standing ovation. He has done it to interpret 'You know who we are', a song that he composed during confinement and that has found a generous welcome.

With denim shorts and a printed summer shirt, he has appeared on the scene, a very summer 'look' for a time when it seems that the benefits of summer are already in sight and, perhaps, less restrictions on cultural activities.

Of the latter, surely, there was a desire in the concert, given the attitude of an audience that celebrated each and every one of the songs that sounded and that, had it not been for the anticovid restrictions, would have increased the party even more.

El Kanka, however, has proposed a very appealing list of songs for those present, with classics from his repertoire such as 'How beautiful is living', sung in its first bars practically from the seats. He lowered the revolutions with 'Querría', a song with more melancholic sonic overtones but which was also very well received.

After 'Andalusia' and 'Come when you come', the singer-songwriter has once again expressed his gratitude to the public, this time, for attending the concerts "in such a rare time as this". This little monologue has served as a prelude to another of the most excited songs: 'Payaso', a song with the essence of chirigota that, incidentally, he released in collaboration with Sharif and Mxrgxn from Zaragoza.

With her she has put the assistants on their feet, who have passed shortly after to the emotion of 'You have to jump'. In this case, a one-on-one with the guitarist led to perhaps the most intimate moment of the evening.

'For your smell or' Yes, you can 'have been other successes that have resonated on the walls of the Zaragoza auditorium before the arrival of' How bad I am and how little I complain ', one of the most memorable moments of the night, with almost the entire audience on their feet, dancing and chanting the song.

After the inevitable stop for the encores, the Kanka has returned to the stage with 'Like', to close the concert in style with 'Canela en rama'. "It has been a fucking pleasure," said the musician, just before dismissing the performance with 'Depende', by Jarabe de Palo, playing through the loudspeakers, with the lights already on.

There, the audience was still standing applauding a concert that surely has left a very good taste in the mouth of the Kanka fans. Now, the Malaga artist has the challenge of completing the five performances that await him at the Rialto Theater in Madrid, from June 16 to 20.