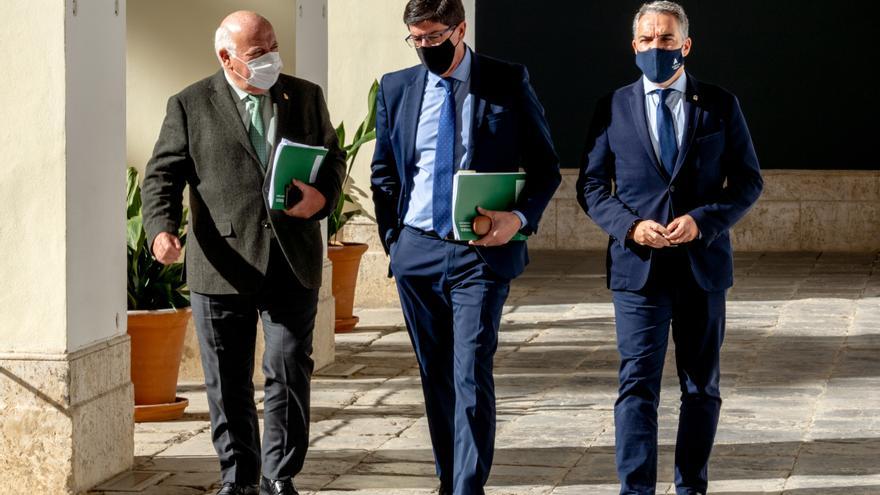 The Governing Council of the Junta de Andalucía has approved in its last meeting of the year an increase in the number of senior positions in the regional administration. It has done so on the horn, since one of the points of the agreement between PP, Ciudadanos and Vox in Andalusia to unlock the 2021 budgets prevents increasing the number of managerial positions in the public sector. As explained at a press conference by the vice president of the Board, Juan Marín, this is a new decree that expands the number of senior positions by 16 “new people” to “reinforce the work in the eight provincial delegations.” In reality there are 32, since the provincial coordinators of Justice and Environment will also have the rank of provincial delegate.

According to point number 42 of agreement between PP, Ciudadanos and Vox in Andalusia to unlock the 2021 budgets, entitled ‘Managerial staff of the Andalusian public sector’, it says verbatim that “in the year 2021, according to the Budget project, the number of managerial staff positions existing in the group of entities referred to in article 25 of the Budget Law may not be increased with respect to the existing one at December 31, 2020, except for special circumstances for reasons of public interest, which will require joint authorization from the competent Ministries in matters of Public Administration and in matters of Regeneration “.

By virtue of the decree, as reported by the Board, the current territorial Delegation of Education, Sports, Equality, Social Policies and Conciliation, separates the peripheral services corresponding to Education and Sports and Equality, Social Policies and Conciliation. Likewise, the territorial Delegation for Development, Infrastructures, Spatial Planning, Culture and Historical Heritage is divided into two: one for Development, Infrastructure and Spatial Planning, and another for Culture and Historical Heritage. According to the Board, with the approved decree there is “a normative text that consolidates the legal norms already dictated and that includes the restructuring of different territorial delegations to achieve greater agility and efficiency in the processing of procedures”, ending the “regulatory dispersion ”

“Here we do believe in the capacity and merit of officials,” remarked Marín, from Ciudadanos, the same party as his Equality counselor, Rocío Ruiz, who just two weeks ago was betting on “Our people, Citizens” when asking for members for public office. Marín has also announced this Tuesday an instruction to regulate the access of the directive personnel of the instrumental entities of the public sector, which will be through a merit contest and interview, plus university degrees and experience. According to the Andalusian vice president, Andalusia is the community “with the least number of ministries per inhabitant in Spain and with the least structure in terms of its governing bodies”, denouncing with the previous PSOE government there were 13 ministries and not 11 as now, detailing that the Board of PP and Citizens has obtained a saving of “14 million euros in savings in senior positions and in structure”, the same figure that the Board gave in February but also without offering more detail in this regard.

In that month of Ferbero, Moreno admitted that he had “rushed” and began to rectify the initial structure of his government, dismantling the ambitious “savings plan” in managerial positions. It was then that the number of senior positions in the territorial delegations increased with 16 new hires (the staff of the Ministry of Agriculture and Environment in the eight provinces was expanded). With those hiring, the number of managers appointed by hand in the Board amounted to 232, which, according to the Ministry of the Presidency, were still 35 less than those of the Socialist Government (267). According to the PSOE, seven more directors than there were when they left the Palacio de San Telmo. The Socialists have also criticized this Tuesday that the Board for “sneaking” between high positions to “please people of his party”.

On the other hand, just three weeks ago, the Andalusian Economic Observatory (OEA) underlined in its analysis of the Andalusian Budget project for 2021 that the Andalusian Budget project provides for spending on the Senior Management program of the Junta de Andalucía, which figure in the items of the Ministry of the Presidency, of 209.24 million euros, a figure that experiences a decline of 6% compared to the 222.58 million that were budgeted for this concept in the 2020 Budget, and that exceeds by 40% to the 148.93 million of the last Government of the PSOE. The Personnel Annex of the 2021 Budget project indicates that the senior positions of the Junta de Andalucía amount to 172, to which are added 49 territorial delegates.

It should be remembered that Moreno Bonilla’s cabinet is the first center-right coalition government in Andalusia. It has 11 ministries, six portfolios for the PP (including the presidency) and five for Citizens (including the vice-presidency). It is the Executive with the fewest departments in the Andalusian autonomous history, a motto that the partners exploited at the start of the legislature as an example of “austerity” in the face of the “waste” of the previous PSOE governments. At the end of this august, the Andalusian Government restructured eight of its eleven councils to “focus” on the economic crisis. Those changes left Ciudadanos without two general directorates, a consortium, a commercial company and the centers for the elderly.