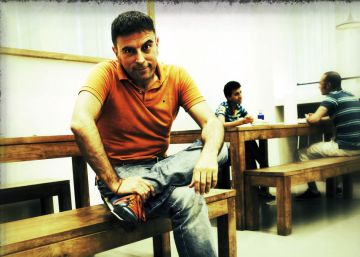 Just two years in front of the Andalusian Center of Photography (CAF) of Almeria, Rafael Doctor He has been dismissed from office by Fernando Francés, general secretary of Cultural Innovation and Museums of the Junta de Andalucía. The cessation occurred on Monday afternoon, after a tense and long two-hour meeting held at the Palacio de Altamira in Seville in the presence of the Minister of Culture, the popular Patricia del Pozo. Doctor, who had arrived at the position by a public contest of good practices and who had two more years to conclude his activity, announces that he will appeal his dismissal in court and ensures no doubt that what happened is part of the "ideological purge" that is carrying out the Board, governed by the Party Popular and Citizens with the support of Vox. "I believe that the real cause of the cessation is my antifascist and animalistic activism."

At the same meeting, Francisco Fernández Cervantes, responsible for Cultural Promotion, was also dismissed. According to a statement from the Board, these decisions are part of the reform of the Andalusian Agency for Cultural Institutions, which now only has four areas: Flamenco, Letters, Visual Arts and Music and Performing Arts. Ensures, in addition, that the decision is not ideological and that Doctor "is in his right if he wants to sue in court." They also assure that the Center will continue to be dedicated to photography but that they need a new profile in the management and that they will call a public contest to choose it.

Although since the arrival of the new Government in Andalusia, Doctor feared the worst outcome, he can not hide his deep displeasure: "I am shocked and very sad because here I have left my skin scarcely without support, but it is a job that I adore and that was giving its fruits, "he told EL PAÍS, while attending the dozens of calls for support he is receiving from the artistic sector, a world in which he has been moving for three decades and in which, among many other things, he has been the first director of the MUSAC in León.

Among the reactions, the photographer Cristina de Middel, National Prize and member of the Magnum agency, criticized what happened with Doctor in a tweet: "A shame, the primocracy advances with great strides".

Doctor is concerned that the CAF, one of the few cultural centers based in Almería, is left in the most absolute inactivity. "Everyone who knows me knows that, in addition to animals, including human beings, I have two other loves: photography and Almería, and I have been told that the CAF depends on an audiovisual entity. , but the only clear thing is that photography, as a specific discipline, disappears ".

Doctor details that the economic strangulation has been planned in detail. "This center, in other times, came to have half a million euros of annual budget for activities, last year, I had 110,000 euros, this year, 15,000. Flowers of periphery, by filmmaker Pedro Almodóvar and director Jorge Galindo, inaugurated last week, could be done by the generosity of the artists, who assumed all their expenses and for the help of the University of Almeria. Otherwise it would have been impossible. "

"Despite everything, the visits had increased by 67% and in the program had included exhibitions such as those dedicated to Norman Bethune and the Desbandá de Málaga, Cristina de Middel, Phes-Spanish solidarity photography, Marlene Freniche, Virginia Rota, María Rosa Aránega, pioneers of Andalusian photography, as well as other bibliographical samples and other projects in the new rooms we inaugurated, taking them away from the spaces that used to be offices, "explains Doctor. For next Friday, the opening of a show dedicated to Gerda Taro and Robert Capa is planned, a project focused on vindicating the role of Taro.

Doctor assumes the ideological burden of his programming and remembers that his proposals were included in the public contest for which he won the position. "My performance had five axes: the role of women in photography, which has made our programming mostly female without the need to seek quotas, Andalusia and the Mediterranean as a border between two worlds, historical memory, so necessary work to heal the wounds of the past, the recovery and enhancement of the origin of photography in Andalusia, and, finally, the Andalusian visual contemporary creation, essentially the local Almeria, which until now had been completely forgotten in the CAF. the axes on which the project that I presented was based and which, with hardly any funds, I have tried to develop the best I could, "he concludes.

The Philharmonic manager sues Morales in the process for workplace harassment