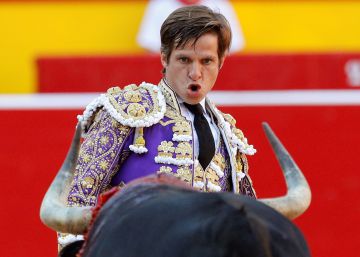 If the fifth bull had not needed the two cheeks, The Juli Cut the two ears and go to the shoulders. It was the meeting of an animal of good class and an experienced bullfighter, technician and dominator. His was a job plenty of resources, with moments of command and category, but it was so long and, sometimes, so superficial, that when it was outlined to kill it was already forgotten that it began with a windmill on its knees, as payment for the toll to the sun, and that had continued by both hands, with passages of different depth, but without rapture with a bull that deserved a more exquisite and profound treatment than the one that starred El Juli, who had no options with the second.

Antonio Ferrera: thrust in the luck of receiving, two pranks – notice – and a descabello (ovation); metisaca and a puncture (return to the ring).

The Juli: two punctures and half thrust (silence); thrust -a notice- and two descabellos (ear).

Pablo Aguado: opposite thrust and a descabello (ovation); half thrust (ovation)

It is the power of quantity and sufficient proof that the bullfighter himself knows that his work has not reached the desired quality. That is why, perhaps, he continued fighting in both hands, tireless and insipid as well, and when it seemed that he was ready to the point and end, an inverted circular that was three, helped by high then and another circular before mounting the sword. Too much for the body. Good bullfighting does not need the ten minutes marked by the regulation.

The rest, another movie. Bullfighting is a mystery, you know, and another empirical demonstration has taken place in Pamplona. The first bull in the afternoon, bravo on the horse and in good condition and class on the crutch, and Antonio Ferrera, high school bullfighter, they did not understand each other as they should; perhaps, because the right-hander sought more the filigree than the depth. The third, meek, complicated in banderillas and of little class, and Pablo Aguado, an artist called for high goals, were combined in a measured work, overflowing with flavor, although without reaching the category of work of art.

"To the bull you have to be able to shake your head," said maestro Pepe Luis Vázquez, and there, perhaps, was the key to the mystery.

Ferrera started well and ended badly in that first bull. He showed off with five airy veronicas, gaining ground in each of them and finished with the descabello, reason enough to lose trophies in this square. In between, a bull of quality and an irregular task, with flashes of bullfighting, especially by natives, and a good turn of muletazos with the right hand, but everything knew little. It could more, perhaps, the desire for show that the command and the depth ..

Better, much better, in front of the room, another opponent with artist borders, before whom the head worked more than the heart, and although he did not save a solid and complete task, and extended his work excessively, he drew natural lengths, and had details of bullfighting. Another bullfighter who wrongly opted for the amount. No, no … no need to give hundreds of muletazos to draw emotion. If it does not fail with the sword in an ugly metisaca it also comes out through the big door.

He debuted in San Fermín Pablo Aguado, head bullfighter furnished and, until now, intelligent aware of the importance of time. He understood very well the esaborío third bull in the afternoon, gently in the muletazos, slowly, without allowing the pythons to reach the deception, and threw away details of flavor, packaging and good manners. Better bull and with more mobility was the sixth, with which he walked with haste, less natural and somewhat dazed. A work of good tone, but minor. Mystery stuff, it's supposed …

The sad note of the day is that the right-hander Roca Rey will not be able to meet on Friday his second commitment at the fair to resent the injury suffered in the right shoulder and what a bad time he did pass in the run on Wednesday. According to the medical report, the bullfighter suffers "a right brachialgia dependent on C7 and a supraspinatus shoulder tendinopathy with effusion."