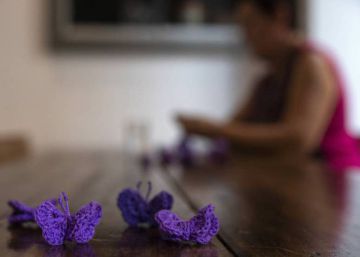 Itziar Prats has achieved that many important people wear the purple butterflies you knit to remember your two daughters, Nerea and Martina, killed by their father on September 25, 2018 when they were six and two years old. Until the president of the Government, Pedro Sánchez, showed them on his Twitter account on November 25, the international day against violence against women, with the following message: “He threatened to kill them. Itziar denounced but something failed. We must focus on the protection of women and minors victims of Machista Violence. We cannot fail again. "The General Council of the Judiciary (CGPJ) has been the last instance that has joined to review the possible judgments.

While weaving and distributing butterflies (already counted by thousands), Prats is knocking at different official doors with his lawyer, Gabriel Rubio, and presenting complaints so that the case can be reviewed and responsibilities are cleared. She denounced in several instances the risk that his daughters ran after the threats he received from the father. He said it in the Women's Center of Castellón, in a police station, in a courthouse on guard and in the Court of Violence number 1 of Castellón. The family has asked the Government for responsibilities, specifically to the Ministries of Justice and Home Affairs, for not protecting minors. Both ministries have already opened file.

He has also gone to the General Council of the Judiciary, the governing body of the judges, to denounce the lack of attention in court, to which he presented evidence that was not reviewed and where the minors were not heard. The agency has opened an investigation, according to the documentation to which this newspaper has had access. "My representative has lost her two daughters, and has the right to complain to the General Council of the Judiciary for the treatment received in the Court of Violence 1 of Castellón," said the letter sent on September 23. It lists the various issues that they believe were overlooked. The spouse, Ricardo Carrascosa, killed his daughters at his home, where the two girls slept because that night was the period of stay set in the provisional measures agreed in the divorce proceedings. After killing them, he threw himself out the window and killed himself.

The complaint focuses on “the lack of compliance” by the Court of Violence 1 of Castellón of what is established by the Istanbul Convention (the Council of Europe Convention on prevention and fight against violence against women and domestic violence) , ratified by Spain in 2014, in addition to other agreements, such as the Convention on the Rights of the Child and the Ombudsman's requests for the attention of minors victims of sexist violence.

The Istanbul Convention, which Spain had signed four years before the murder of the girls Nerea and Martina, urged the signatory States to adopt legislative measures “so that the authorities could carry out a lethality risk assessment as well as extend the measures of protection for exposed children ”, collects the complaint. In the case of Itziar Prats, the risk of lethality was not assessed, nor was their daughters heard. The police protocol that assesses the risk of victims of sexist violence was modified after this case to include both aspects. In fact, the assessment that established that protocol when she went to the police station it was "low risk" and no protection order was granted. In the courts the forensic valuation units that allow these examinations to minors are not yet guaranteed.

“The juveniles were not heard by the court, the minors were not explored by the court, and the actions of the psychosocial services shine because of their absence,” says the complaint, to which the CGPJ responded last October. The brief also recalls that Prats had asked the court for protection measures, which emphasized that the safety of minors should be guaranteed "as the final recipients of the threats denounced."

In the brief, the lawyer emphasizes that “there were no minors in the proceedings in the Violence Court of Castellón. There are no minors anymore. ” Itziar Prats presented as audio evidence that he recorded his ex-partner. He said he had received “very serious threats”, the report of mistreatment of his daughters and episodes of violence in the presence of minors. In the audios we heard phrases like "in the end we will all end up dead and I in jail" or "I will take away what you love most". When Prats asked him if he was threatening to kill her, he replies: "No, not you, I'm not going to spend any energy on you" or "you're already sentenced."

There is an issue that the judge of the case included in his assessments that caused special damage to Itziar Prats and for which he also requested an explanation from the Judiciary. When they filed for divorce, Prats left the marital floor to another nearby, just a few streets away. The head of the Court of Gender Violence 1 of Castellón understood that moving to such a nearby residence was not compatible with the fear she had expressed feeling.

That statement "projects on Itziar the feeling of having done something wrong," notes the complaint written by Prats, which explains that the woman understood that this decision was behind not being granted the protection order she had requested, giving understand "that if he had set his home a greater distance than that of his daughters' father, then the protection order would have been adopted."

And he adds: “It would be the same if the address were 10 or 100 kilometers away. The girls spent the night with him and were alone with him when he corresponded, and that was what he wanted to avoid, and that was precisely when they spent the night with him when he killed them. ” According to the brief, this fact adds "the projection of guilt" to pain for the loss of their daughters. "It is of infinite cruelty," says the lawyer in his letter. “Itziar needs that some person in charge of the Judicial Power receives it, and tells him that the fact of having established his domicile close to that of his husband, before receiving the threats, is not the cause of which the requested protection order was not agreed, and that therefore she is not responsible for such a measure not being agreed, nor is therefore responsible for anything else. ”