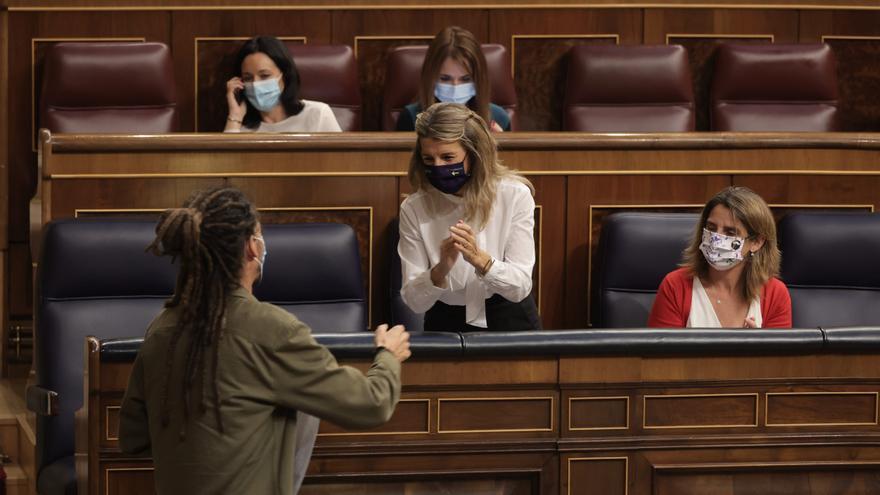 “We are all dancing to the sound set by the Supreme Court,” says a deputy from United We Can, very critical of what is happening. And he is not without reason. The controversial condemnation of former deputy Alberto Rodríguez has generated an internal anger on several fronts: not only within the coalition government, with that announced lawsuit against the president of Congress. Also a division within United We Can. All this, to the great delight of the right wing.

I remind you of the precedents, in case you missed a previous chapter.

In a more than controversial sentence, the Criminal Chamber sentenced Deputy Alberto Rodríguez to 45 days in jail for the crime of attack against law enforcement officials. He is accused, and given as a proven fact, of kicking a policeman in the knee during a demonstration in 2014. The evidence? Little more than the policeman’s own testimony.

The court handed down a judgment without unanimity. The five magistrates promoted to the Supreme Court by the members appointed by the PP in the CGPJ supported the sentence – among these five judges, there is even a former PP senator, Vicente Magro. The two magistrates of the progressive minority objected, recalling in their particular vote something as obvious as the presumption of innocence. Nothing strange for anyone who already knows the monopoly that the PP has achieved in the Supreme Court – if you want more details, I recommend this report about it-.

The sentence against Rodríguez was minimal: 45 days in jail “with the accessory of special disqualification for the right to passive suffrage.” A penalty that can be replaced by a fine of 540 euros, which the convicted person has already paid.

The Supreme Court could have sentenced Rodríguez to the penalty of disqualification from public office, which he did not do in his sentence.

And from that point came a legal debate that has been resolved, for the moment, with the loss of the seat for the convicted person, after the Supreme Court’s lawyers endorsed that it was not necessary, after the president of Congress, Meritxell Batet, asked for clarifications from the Second Chamber, after the Supreme Court insisted on the execution of the sentence – but without clarifying what such a thing consisted of – after Batet decided to expel Rodríguez from Congress.

In the opinion of many jurists, what happened is a very serious interference by the judiciary over the legislative. An intolerable pulse, because it is not as clear as the Supreme Court wants to make it seem that this ruling entails the loss of the seat. But it is also true that the position in which the Supreme Court had placed the president of Congress was, whatever she did, more than complicated. The thrown ball could only end badly or worse, as in fact it has happened.

If Batet had chosen to resist in the face of the Supreme Court’s outrage, the one who would have filed a complaint for prevarication against the president of Congress would have been Vox. Or the PP. Or both parties. And the court that would have decided in this regard would have been that same Second Chamber of the Supreme Court that has sentenced Rodríguez, where the right wing maintains a huge majority. I remind you of the scoreboard. In the Criminal Chamber of the Supreme there are 12 conservative magistrates –promoted by the members of the CGPJ appointed by the PP–, compared to only 3 progressives. It is the most obvious and direct consequence of the successive blockades to the renewal of the Judicial Power each time the right wing loses the elections, such as I have already explained in other articles.

It will also be that Criminal Chamber who would have to settle the complaint that was announced against Batet, for prevarication. A lawsuit that has no chance of succeeding, and that has created a huge hole within the coalition government, and also within United We Can. A complaint that is in doubt that will even be presented.

The chronology of what happened is quite clear. At nine o’clock this Friday night, United We Can announced a lawsuit against Batet. The statement sent by United We Can to the media was clear: “We will file a complaint against Meritxell Batet for prevarication.” First person plural. Us. That is, United We Can.

Minutes later, elDiario.es and other media we publish the news And it was then, and only then, that a good part of the leaders of Unidas Podemos learned from the press of a decision that a part of the party – Ione Belarra, Enrique Santiago, Pablo Echenique … – had taken behind the backs of the rest. . Not a minor decision: not every day a party member of a coalition announces a complaint against the third authority of the State, in the hands of its partner in the Government.

Vice President Yolanda Díaz did not know about that complaint. The leader of the United Left, Alberto Garzón, did not know. The Commons did not know it, according to three different sources from United We Can.

The internal anger, as you can imagine, was tremendous. And after her came, that same night, an interview with Pablo Echenique on Cadena SER, where the spokesperson for Podemos assured that the person filing the complaint was not the party, but “Alberto Rodríguez, with all our support.” Echenique also said that Yolanda Díaz knew of the decision. And both were not true.

Because not only the second vice president had learned from the press about this alleged complaint against the president of Congress. Nor did the interested party himself, Alberto Rodríguez, know anything about it. Nor had he been consulted. Nor is he apparently convinced to present it, according to sources close to the former deputy.

Just a few hours ago, Alberto Rodríguez announced that leave the militancy of Podemos. A decision that is not alien to everything that has happened in recent days. Which is extraordinarily serious, also because of what it shows: the internal division at United We Can. The enormous difference in strategy between the hard core of Pabloism –which continues to bet on the toughest possible confrontation with the PSOE– versus the more transversal course that the greatest electoral asset that space has: Yolanda Díaz wants to mark.

Sources from the UP parliamentary group believe that the hard core of Podemos – with Ione Belarra at the head – defends tightening the rope with the PSOE and even breaking it if necessary, and going to an electoral advance in 2022. Do not exhaust the legislature and take advantage of the good evaluation of Yolanda Díaz who surpasses Pedro Sánchez in the CIS. They also believe that the PSOE is not going to give more space to the second vice president and that what happened with the negotiation of the labor reform – where it has been displaced from the talks – is a sign that the PSOE will not allow its popularity keep increasing. That is why they want to break up, before the PSOE puts Yolanda Díaz in the wheel; a strategy that others in the coalition see as suicidal: due to the enormous risk that a hypothetical electoral advance will only benefit the right wing.

That same right that attends, with joy, the proven capacity for self-destruction that the left always has.