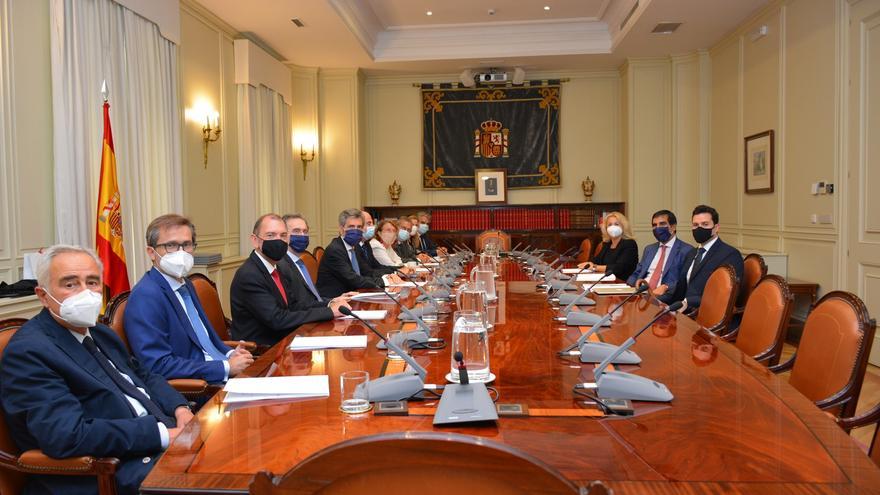 In full debate on the model of election of the members of the General Council of the Judiciary, the Judicial Ethics Commission stands as the only body chosen one hundred percent among the active members of the judicial career at the national level. Seven members without the presence of affiliated to progressive associations who do not charge for being part of a body whose opinions are neither binding nor have any practical effect.

This Commission held its first meeting in May 2018, born as an attempt to improve the limited direct participation of judges in the configuration of this type of organization. Six judges and magistrates and a person from the academic world who address the queries that their colleagues send them, in many cases related to their freedom of expression: if they can speak with journalists, if they can give interviews on tabloid programs or how they should use their networks social. It is an independent body from the Council itself.

In the Judiciary, the participation of the judges is limited to the endorsements that a part of the candidates receive from 25 active judges or associations, in the governing chambers of the territorial courts the presidencies are defined by the Council and the deanships They are elected by the judges of a specific judicial party, as well as the government chambers of the Superior Courts. The Ethics Commission is, therefore, the only body that judges and magistrates from all over the country elect together at the polls.

After the last elections, the Commission was chaired by Celsa Pico, a long-standing magistrate in the third chamber of the Supreme Court and who in recent years has participated in decisions such as the endorsement of Franco’s exhumation or to the last increase in the Minimum Interprofessional Salary. Pico was affiliated with the progressive association Judges and Judges for Democracy, although it is not currently part of any association.

Along with her appear in the Commission the magistrate Antonio del Moral, of the criminal chamber of the Supreme Court, a member of the court that tried and convicted the independence process. Considered a conservative profile and a career prosecutor, Del Moral is not part of any association either. María José Rivas is a magistrate in Granada and is affiliated with the majority and conservative Professional Association of the Magistracy and Eduardo López Causapé is a magistrate in Zaragoza and a member of the Francisco de Vitoria association, the second in affiliates and considered to have a more moderate profile than the APM .

The judicial list of the Commission is closed by Ramón Badiola, a magistrate in Madrid with no current affiliation although a former member of both the APM and Francisco de Vitoria, and the Ayamonte judge Francisco Javier Parra, who acts as secretary. Cristina Hermida, professor, is the seventh member of the Commission. An organization, therefore, without current affiliates to associations with a progressive profile.

Since its inception, various associations have been critical of the projection that the Commission and its opinions and, in fact, have not had candidates from their ranks. It was the Independent Judicial Forum that in 2019 assured that the Commission “is in danger of serving as a reference or complement in actions aimed at resolving civil, criminal or disciplinary responsibilities against judges and magistrates, a function that is expressly prohibited.” The fear is that their opinions end up influencing, for example, a sanctioning process against a magistrate.

They also assured then from this association that the Commission “could not fulfill the functions entrusted in the Principles of Judicial Ethics approved by the CGPJ without creating precedents that would later be used in the proceedings against members of the judicial career.” Without criticizing the members of the Commission, the FJI assured that it is an institution “disputed because it leads to the creation of dogmatic models of judges, both in their personal and professional lives.”

The latest available annual data reflects that between 2018 and 2019 the Commission held, as established in its regulations, one commission per month and signed twelve opinions in addition to five inadmissibility agreements. Between 2019 and 2020, with the pandemic involved, fourteen opinions were issued and four doubts raised were rejected.

The matters dealt with by the Commission stem from the doubts that raised by the judges themselves and magistrates. The cases that have had the most diffusion in recent years have had to do with the freedom of expression of judges in spaces such as gatherings, interviews and on their profiles on social networks.

This January, for example, the Commission requested “measure, seriousness and prudence” as well as “political neutrality” to the judges and magistrates who participate in interviews, colloquia or who make use of social networks. Dozens of judges and prosecutors have, for example, Twitter accounts in which they identify themselves as members of the judiciary and freely express their opinions on current public affairs. Others such as the magistrate of Castilla y León, José Luis Concepción, have expressed clear political opinions on television without this having entailed any type of sanction by the CGPJ.