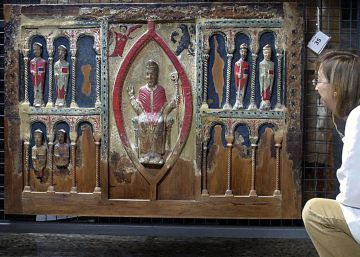 This resolution opens a new front in favor of the Aragonese aspirations, after the repeated failure of the Bishopric of Lleida to the judgments of the Vatican courts, which ordered the return of the assets of the segregated Aragonese parishes of the Catalan diocese in June 1995 and they will become part of the newly created diocese of Barbastro-Monzón. The sentence of first instance comes after several months of waiting for the trial that sat on the bench for up to three bishops last May and that has already generated 36 volumes with 25,000 pages where 1,017 documents have been incorporated.

According to the ruling, released this morning by the Superior Court of Justice of Aragon, the main claim made by the representatives of the Bishopric of Barbastro-Monzón and by the Government of the Community of Aragon against the Bishopric of Lleida, is fully estimated Consortium of the Museum of Lleida and the Generalitat of Catalonia.

The sentence declares “that each of the assets described in the first fact of the main claim are the property of each respective parish, from which they come, and that they must be immediately returned to them through the bishopric of Barbastro-Monzón at its headquarters ”.

The judge considers the arguments presented by the bishopric lawyers and the government of Aragon to be good, in that the pieces "were successively given in deposit to the Bishopric of Lleida, who subsequently deposited them in the Diocesan and Regional Museum of Lleida, former Diocesan Museum of Lleida ", and not those of the Lleida party who tried to demonstrate during the hearing held last May that all these pieces were owned by the bishopric of Lleida after they were acquired from each of the parishes. In this sense, the Bishopric of Lleida already recognized during the hearing that he did not have title to 28 of the pieces, although he enforced the right of usacapión for its acquisition.

The judge also gives the reason to the Bishopric of Barbastro-Monzón to be able to claim the pieces on behalf of the parishes, something they questioned from Lleida.

However, the "judgment is not firm and appeal can be filed before this court within 20 days of its notification for resolution before this Court," something that seen the precedents in the other open conflicts: the pieces deposited both in the MNAC as in the Museum of Lleida of the monastery of Sijena, as well as the mural paintings of the chapter room of this monastery that are exhibited in the MNAC of Barcelona, ​​the affected Catalan parts will surely do.