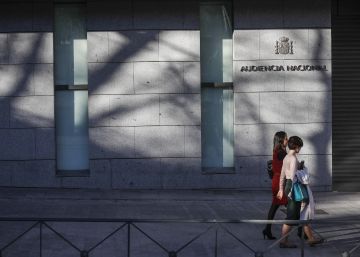 The judge of the National Court Manuel García-Castellón He accused BBVA on Monday as a legal entity at Villarejo case. The judge attributes to the entity alleged crimes of bribery, discovery and disclosure of secrets and corruption in business. These are the same crimes that the Prosecutor's Office appreciates. Judge Manuel García-Castellón's car has not been disclosed because the case is under summary secret. However, according to judicial sources that have accessed the text, the judge's argument coincides with that of the Anti-Corruption Prosecutor's Office in two of the alleged crimes: bribery, discovery and disclosure of secrets.

However, on the third, corruption in business, the judge's positions are somewhat more nuanced than those of prosecutors. The magistrate states that we must analyze if the BBVA was benefited or harmed by the alleged espionage plot that was made with the hiring of the policeman José Manuel Villarejo. He admits that, at the current initial moment of the accusation, this is a debatable issue.

And then he explains that, if it is accepted that BBVA committed the crime of corruption in business, it would be necessary to analyze whether the internal control worked, that is, if the necessary mechanisms for monitoring payments and the behavior of employees were activated. key employees The bank has, like the rest of the entities, an internal control structure for contracts and invoice payments, monitored by the General Intervention Department. In addition, it has the internal audit department, which must ensure the proper functioning of the organization, as well as review the procedures.

In addition, the Risk and Compliance Committee has the function of “receiving information on breaches of applicable internal or external regulations,” according to its regulations. It should also be informed "of relevant issues related to the legal risks of the group's activity". And the regulation adds that "the issues that could cause a significant and material impact or damage to the assets, results or reputation of the group" will be relevant. You should also "examine the draft codes of ethics and conduct."

The hiring of Villarejo for 13 years was a relevant issue that affected the reputation, although it is unknown if this commission knew, if it asked questions when the first news of the hiring of Villarejo was known, in May 2018, or if it tried to take measures that have not transcended. Now, the Risk and Compliance Committee is chaired by Juan Pi Llorens, with José Miguel Andrés Torrecillas, Jaime Caruana, Carlos Loring and Susana Rodríguez as members.

For the experts consulted, this situation could also question the role of the supervisors, since it does not appear that they had news of this matter. The bank itself has opened several internal investigations, lasting more than one year, to learn how payments were made to Villarejo, which questions its internal control.

According to financial sources, the ECB will closely monitor how the imputation on the evolution of BBVA's businesses, the price and the large shareholders of the entity can affect it. The objective is to closely monitor any effect that could affect your financial stability.

"The public prosecutor considers that from BBVA there were illegal contracts and payments to the company Cenyt, whose owner was Villarejo, which affected several sensitive areas of the bank and various executives of the entity, for a prolonged period of time," explained the Hearing . The cause remains secret.

The Prosecutor's Office asked last week to investigate whether the bank hired Cenyt to spy on different people in order to obtain diverse information about the Sacyr construction company. This firm tried to relieve Francisco González of the presidency of BBVA in 2004 and 2005. The ninth piece of the Villarejo case focuses on the work carried out for BBVA by the police, who has been in preventive detention since November 2017. Villarejo allegedly He worked under the rope for 13 years in exchange for about 10 million euros.

Hiring and allegedly unlawful payments to Cenyt affected several sensitive areas of BBVA and various executives of the entity over a long period. Villarejo provided services to the bank from 2004 to 2017. The Prosecutor's Office reaches these conclusions after analyzing the documentation on paper and digital media seized in the records made in November 2017 and the documentation provided by BBVA itself.

The public ministry emphasizes in its writing that some of the executives investigated, whose identity is not disclosed as the secret cause, supposedly received gifts from Cenyt for facilitating such hiring.

Mexican minister speaks in Davos with Lighthizer, from the USA, and with Hogan from the EU

Officials “lose” 1,632 million due to the economic breakdown