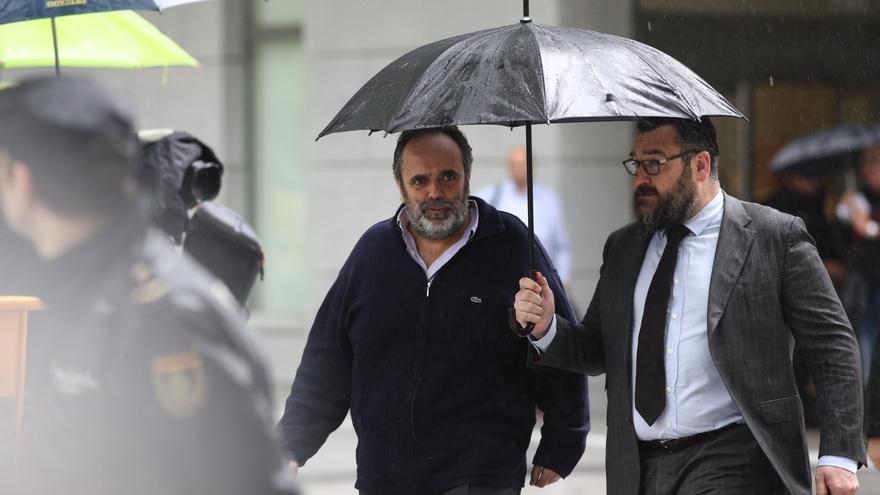 The judge of the National Court that examines the ‘Punic’ case has agreed to open a new separate room, number 13, to investigate the documentation provided from the Soto del Real prison by the former mayor of Majadahonda Guillermo Ortega and that could prove the existence of an imposed billing system “that would seek to satisfy the economic needs of the PP of the Community of Madrid”.

It is a series of emails that include invoices and that Ortega delivers through his lawyer to the National Court in order to show his willingness to collaborate with justice. “As an ‘example’ of the existence of ‘this system’ (of tax billing), documents attached to emails received in the email of Mr. Ortega, ggortega@telefonica.net,” says the order dated May 12 to which Europa Press has had access.

Now, the magistrate, who received Ortega’s letter in the framework of piece 9 of Púnica, in which it is investigated whether the Madrid PP was financed illegally, decides to open a new piece given the procedural moment of piece 9, which is close to the end of instruction.

It also officiates the UCO to analyze those invoices delivered by Ortega and compare them with the documentation delivered by the Community of Madrid regarding contracts and advertising invoices for the Puerta de Toledo Market.

But, according to Ortega’s letter of April 2021, to which Europa Press also had access, and reflects Judge Manuel García-Castellón in his car, the one who was also president of the public company Mercado Puerta de Toledo asserts that he has received a draft that “would prove the existence of irregularities”, although he clarifies that he will wait to deliver it on the advice of his lawyer until “he receives the complete documentation that serves as a contrast.”

Despite opening a new piece after Ortega’s writing, the judge warns that he is struck by the fact that the invoices that he delivers and that would prove these irregularities are “documents that come from his email, so they would be files of the that he already had at the time he filed his first complaint with the Anti-Corruption Prosecutor’s Office “, and when he declared in July 2020.

In addition, he recalls that in his statement as a witness he referred to the existence of more than one million euros of over-invoicing in the contracting of advertising diverted through the Mercado Puerta de Toledo society, which would be creating a kind of “fund”, in the words of Ortega himself, to pay party expenses.

“Mr. Ortega affirmed that money was diverted to improve the image of the members of the CAM, the Regional Government and the President -at that time Esperanza Aguirre- noting in a somewhat concise way that acts were carried out and actions were taken from that fund. they organized events for the media or there were journalists who charged money to organize them, not knowing if it was cash, “says the judge in the car.

In this sense, he also recalls that Ortega also affirmed that the SWAT merchant was used to pay party expenses in a covert way through the Puerta de Toledo Market. And he adds that after nine months since that statement, he now provides a series of documents, which he understands as evidence to prove the facts that were reported at the time.

After these considerations, García-Castellón describes the delivery of Ortega’s documents as a “considerable leap” with respect to those that are the subject of piece number 9, since there is talk of “an alleged monetary deviation through the Mercado Puerta de Toledo society “. And it emphasizes that separate item 9 refers to the alleged irregularities that were committed in IMADE in the award and execution of an advertising service contract.

“Considering the procedural moment in which we find ourselves and the time that has elapsed since the initiation of this proceeding, and bearing in mind that the facts referred to by Mr. Ortega represent a qualitative leap that considerably exceeds the purpose of this piece, who subscribes this resolution considers that they should be investigated in a separate piece “, he concludes.

Regarding the facts that are the object of the new piece, it indicates that from what Ortega delivered there are indications of the alleged commission of a crime of documentary falsification committed by an individual in a commercial document. And it points out that the penalty for this crime does not exceed three years and would have been prescribed even before the filing of the complaint that led to the initiation of these proceedings in 2014.

Does not provide evidence of money diversion

However, the judge recalls that beyond the documents presented, allegedly modified invoices, “no indication of the monetary deviation is provided, nor is it proven in any way that the ‘fund’ mentioned by the complainant Ortega may have existed. in his statement in court “.

In line, he warns that the fact that he was a popular mayor is based on personal circumstances “that must be taken into consideration when assessing the credibility of his testimony, since it is a convicted person who denounces incriminating facts.”

And it adds that it does not provide an indication that allows to notice expenses or disbursements that could have been made against this referred “fund”, nor does it identify what acts, which persons or entities could have received compensation from this “fund”, nor is it it justifies its existence, even incidentally, in no way.

For all these reasons, he considers that the momentum of the process cannot depend on the will of the complainant, and adds that it is “at least surprising” that Ortega presents this documentation now without giving further explanations when he had it in his private email.

The invoices that Ortega delivers

In his writing, Ortega makes a list of up to 13 invoices issued by SWAT between 2006 and 2009 against the Puerta de Toledo Market “for apparently fictitious jobs” and that would add up to a total of 832,560 euros. Those ‘fictitious’ works would have been recorded as events, public relations, videos, photographs, painting or maintenance.

He also talks about invoices with surcharges of invoices issued by the Puerta de Toledo Market to IMADE. And he points out that while the subcontracted company issued an invoice for a certain price, that order was invoiced from the Market to IMADE for a much higher price.

In one of the invoices that he delivers to the judge, he speaks that it goes from 4,000 euros to 74,000 euros. To this he adds that duplication of invoices were also made for the same jobs, similar concepts, and analyzes invoices with extra costs for a fashion show that took place in 2008 and for sports week.