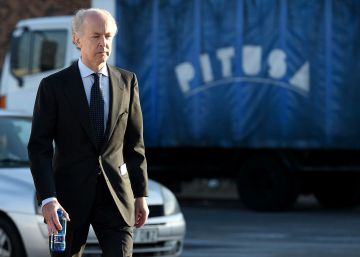 A report that reflects the “systematic concealment of substantial losses” and the “notable alteration of the real appearance of the financial economic situation” of Abengoa is at the base of the car, known Monday, with which the judge of the National Court Ismael Moreno has admitted an extension of the complaint against Abengoa and the auditor Deloitte for an alleged crime of investor scam.

This decision is part of the case that investigates whether the Spanish multinational specialized in renewable energy it altered its accounts in 2014, 2015 and 2016 and if doing so caused damage to its partners and shareholders.

The Hearing admitted in February 2017 a complaint against former company president Felipe Benjumea and former CEO Manuel Sánchez Ortega. In it, the judge investigates whether “the optimal figures that reflected the financial statements of Abengoa and its idyllic financial and financial situation disseminated by its administrators prior to its financial collapse” (which In November 2015 he led them to submit the preconcurs applicationo) contradicted the financial and economic reality of the company.

In the order known today, the judge states that “if Abengoa entered into insolvency situation overnight, if the banks did not ensure the capital increase amounting to 650,000,000 euros, it was because Abengoa’s accounts reflected a reality quite different from its true economic-financial and patrimonial situation during the time it was administered by Messrs. Benjumea and Sánchez Ortega, the Audit Committee was controlled by the two counselors today, Mrs. García Díez and Velarde Valiente, and audited without qualifications for Deloitte and by Mr. Arranz Alonso “.

In its previous report on the admission of the complaint, the Prosecutor’s Office considered that there are enough indications to consider in this state of the case and “without prejudice to further qualification, the possible accounting alteration with detrimental effects for its partners, shareholders and / or third parties of the accounts “of at least; 2014 to 2016 of the annual accounts of Abengoa, S.A. and other subsidiaries (Abengoa Solar, S.A. and Abengoa Bioenergía, S.A.).

He added that “for this purpose, and despite the difficulties and obstacles that have been raised to collect the documentation that seems to point in the direction indicated, there are indicative data reflected in the expert report provided by the complainant of which the systematic concealment of substantial losses (impairments) of its assets as well as the inclusion of certifications of works not sufficiently accredited that have determined a notable alteration of the real appearance of the entity’s economic-financial situation ”.

The judge is based on the report provided by the Affected Platform prepared by the economist and auditor Juan José Silva Clemente which reflects the “systematic concealment of substantial losses (impairments) of assets, as well as the inclusion of certifications of works not sufficiently accredited that have determined a notable alteration of the real appearance of the economic-financial situation of the Abengoa entity ”.

Likewise, the resolution of the ICAC (Institute of Accounting and Audit of Accounts) of February 20, 2018, which sanctioned the auditor Deloite and her partner Manuel Arranz and that highlighted the existence of irregularities that affected the image unquestionably faithful that Abengoa moved to the market in its accounts of the year 2014 “with the endorsement of the coquerellada Deloitte” The magistrate also refers to the reports provided by the State Advocate in an arbitration proceeding before the Arbitration Institute of the Stockholm Chamber of Commerce.

In line with the complainant, the judge argues that there is no lack of reasons in front of Abengoa, Deloitte and the three executives as assumptions responsible for “the serious alteration and alleged falsehood of the economic-financial and patrimonial reality that was hidden from the thousands of investors who they decided to invest their savings in the company. ” This situation, according to Moreno, led to “represent a reality diametrically different from the real one, to the point that where there were expectations of benefits and dividends there were indeed losses of such magnitude that it became unsustainable being forced to recognize their insolvency situation, from which he could only leave with removals of up to 97 percent and wait ten years. ”

The head of the Central Court of Instruction 2 also points out that, as evidenced by the complainant’s report, there are “indications that may include the systematic concealment of substantial losses of its assets, as well as the inclusion of certifications of works not sufficiently accredited that have determined a remarkable alteration of the real appearance of the economic-financial situation of the entity “.

These facts, indicates the order, in this state of the proceedings, could integrate crimes of falsification of accounts that reflect the economic situation of the company to the detriment of the same, its partners or third parties and crime of fraud of investors typified in articles 290 and 282 bis, respectively, of the Criminal Code.

In relation to the crime of misrepresentation of accounts, the magistrate recalls that the law prevents imputing this crime to legal persons, so he attributes this criminal type only to natural persons.

The order agrees to carry out a series of proceedings, including the statement of four witnesses, as well as the requirement to both Abengoa and Deloitte and KPMG of different documentation.

Latam reduces its international routes to Santiago, Sao Paulo and three US cities.