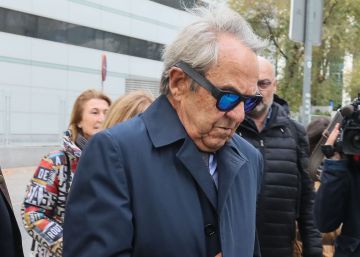 The judge who convicted Jaime Botín for smuggling cultural property has detected "an error" in his own sentence. Hence, I now publish a "clarification" of the ruling. The change is capital: the penalty almost doubles. On January 14, the former president of Bankinter He was punished with 18 months in prison and a fine of 52.4 million, for taking out of Spain Head of young woman, a picture of Picasso of his property, despite the explicit prohibition of the Ministry of Culture, which had declared the work inexportable. After the clarification, issued last Friday by the criminal court number 27 of Madrid, the penalty rises to three years and one day in jail, while the monetary penalty rises to 91.7 million.

Judge Elena Raquel González Bayón corrected her ruling, something very rare, after the request of the Prosecutor and the State Attorney to review her calculations. The rest of the decision remains intact and therefore also the "confiscation" of the table, valued at 26.2 million, and its "attribution to the Spanish State". It's only been two weeks, but Jaime Botín can cost a year and a half. And 40 million.

After the car, advanced by The confidential, the sentence is closer to what both accusations requested at trial: four years in jail and 100 million fine. The penalty provided by law ranges from one to five years, while the penalty can range from the same value of the good to its sixfold. "The crime [...] by which the defendant was condemned has to be imposed in his upper half, "says the clarification order. The defense of Botín already announced two weeks ago that he would file an appeal before the Provincial Court. And, in a very hard statement, he criticized the ruling and he came to qualify one of his "nonsense" arguments.

“Despite being fully aware of the administrative ban, the defendant transferred the painting to the schooner Adix in order to get it out of Spain ”, the judge wrote in the sentence. The work was requisitioned aboard that sailboat, owned by Botín, in the port of Calvi, in Corsica, in the summer of 2015. According to the accusation, the banker had hired a private flight to take the painting to Switzerland, with the intention to sell it "It doesn't matter if it was going to be kept in Geneva or sold through Christie's in London, because the truth is that the defendant's purpose in moving him was none other than to take him away from the Spanish Administration," says the sentence. Because, at the time, it had been more than two and a half years since Culture had denied the banker permission to take Head of young woman outside the national territory. The picasso rests since then in the stores of the Reina Sofía museum.

The start of the case dates back to December 5, 2012. That day, the auction house Christie's Iberica requested Culture, on behalf of Botín, the authorization to move the painting to London, where it would be included in a bid scheduled for February of 2013. "This requirement was necessary to find the work in Spain and be a property belonging to the Historical Heritage, given its obvious historical-artistic interest and have an age of over 100 years", clarifies the sentence. The ministry replied with a refusal, due to the importance of the work. As Paloma Esteban, a doctor in Art History and author of the report on which the decision was based, explained in the trial, the picture comes from the Gosol period of Picasso, as the summer that was spent in the town of Lleida in 1906 is known, considered fundamental for the birth of cubism. According to Esteban, there is no such canvas in Spain, nor probably in Europe.

“A good may belong to the Historical Heritage and yet not be inventoried or declared of cultural interest, that is, not having been subject to an administrative procedure or declaration. […] Since the table is from the year 1906, there is plenty of discussion about the classification of the good as of cultural interest or its cataloging. […] Any link or proximity to Spanishness is enough to be considered that the good integrates the Spanish historical heritage, ”explains the ruling. The defense of Botín does not share this criterion at all: the refusal of Culture before the National Court, without success; He then went to the Supreme Court, whose ruling has not yet been issued. Therefore, the banker's lawyers argued that the trial should wait for that decision before moving forward. The judge did not consider it necessary. "Who is going to buy a work of art in Spain, given the legal uncertainty generated by this sentence if it becomes firm?" Botín's defense responded in his statement after the sentence.

For the accusations, all the elements of contraband concurred: a work valued at least 50,000 euros, belonging to Spanish heritage, transferred abroad without permission. For the defense, however, Head of young woman it was never taken out of the national territory, because it never stepped on it: it was acquired in London in 1977, and since its export was banned, it did not leave the Adix, which sails under the British flag. The banker also reported that he offered his picasso to the Administration, but the lack of liquidity in times of crisis knocked down the operation. Finally, it has been a court that has handed over the painting to the State, at least for now. When a final judgment closes the case, it will also be known to whom the Picasso