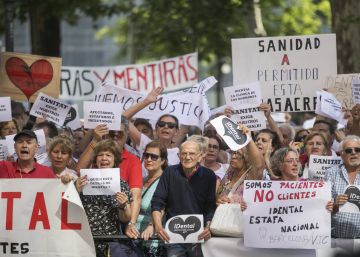 Second varapalo, in just one month, to the dome of iDental. After Judge José de la Mata decided on October 30 open oral trial against former owners of the clinic network for a fraud of 24 million euros To the Social Security, the magistrate has now taken a step forward in the investigation for the alleged fraud against the creditors and the patients. As stated in a new brief dated December 3, the National Court instructor has also agreed to prosecute 35 people, including former owners, for allegedly creating two different "criminal organizations" focused, on the one hand, on diverting money from financial loans and, on the other, of the defective treatments provided to clients.

This measure of De la Mata inflicts another blow to the alleged leaders of the plot, who have already seen how the Prosecutor requested only a few weeks ago up to six years in jail against them for non-payment to Social Security. Now, in addition, the judge attributes to them in this line of investigation another battery of crimes: continued fraud, misappropriation, document falsification, fraudulent administration, property uprising, money laundering and criminal organization.

In his extensive 383-page car, the judge explains that he opened the investigations in July 2018, after iDental closed without warning and left thousands of patients lying, who saw how their treatments were interrupted or not even started. Since then, the investigation has been "expanding", according to the magistrate himself, who speaks of the discovery of two alleged criminal groups within the framework. The first, led by the founders of the network of clinics: Antonio García Pellicer and Vicente Castañer. And the second, headed by the managers who subsequently took control: Luis Sans Huecas and the brothers José María and Juan Garrido López.

As detailed by De la Mata, García Pellicer and Castañer formed the iDental group of companies and launched "the entire corporate structure" that would be used later in the alleged scam. A "fraudulent strategy" that consisted "in offering sophisticated and high-quality dental services to clients, at ridiculous prices, with full knowledge of the group's inability to provide the compromised services and with total disregard of oral health and state of their users, making them believe that the very high cost of services was covered by subsidies or official aid. "

In this way, the magistrate continues, once they captured the client, they pressed him "very aggressively" to sign the budget and a consumer credit. "Bypassing the economic-financial solvency requirements established by the financial ones," adds the instructor of the National Court. The objective of the plot was none other, therefore, to capture the largest number of clients and thus collect the full amount of their loans to enrich themselves, knowing that they would not provide the services.

In fact, De la Mata insists that "a massive number of treatments were left unfinished" and many were defective. There were injuries, infections, allergies and intolerances. Nasal septa and eardrums were perforated. Jaws fractured. Healthy pieces were extracted ... To which we must add, in addition, poor hygiene in services, the inexperience of hired dentists - "mostly recent graduates without professional practice" - and malpractice. "For example, in cases of surgical interventions, no one recommended that they should take antibiotics to prevent possible subsequent infections," describes the National Court order.

But all this fraudulent network has a second derivative. The magistrate has discovered a second criminal group within the plot, presumably headed by Sans and the Garrido brothers, who acquired the iDental group after its collapse. According to De la Mata, when they arrived, they not only followed the same policy of attracting clients in the network of clinics, but also had years dedicated to obtaining financing from financial institutions - such as Bankia - to invest in companies and Enrich illicitly with the diversion of loans. According to the judge's calculations, they obtained a minimum of 54 million euros.

In addition to this line of investigation for economic crimes and the separate piece opened for Social Security fraud, De la Mata still keeps the investigations open for the alleged crimes against public health committed by those investigated and others in the dental treatments of iDental .