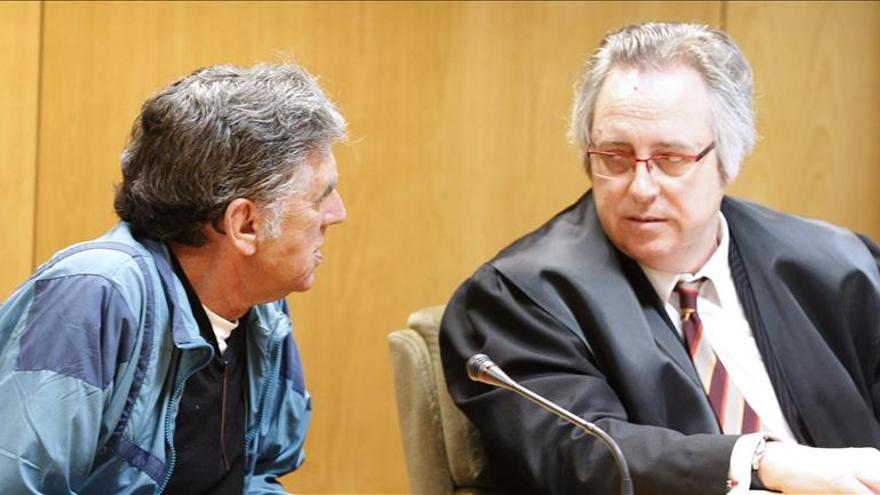 The judge in the Villarejo case, Manuel García-Castellón, summoned Enrique Olivares to the National Court next Friday, convicted of robbing the Bárcenas house disguised as a priest and armed with a pistol in the fall of 2013, in the middle of the Kitchen operation. Olivares is serving a sentence in the infirmary of the Aranjuez prison since, already in prison, he suffered a stroke from which he has not finished recovering. In an order, García-Castellón informs that a forensic will recognize him and rule 'in situ' if he is in a position to give a statement as an investigated person.

The instructor makes this decision without having received the report he commissioned from the forensic doctor who accompanied him to visit Olivares in jail last January, according to elDiario.es. That report has been delayed due to the discharge of the doctor and now García-Castellón opts for Penitentiary Institutions to transfer Olivares by ambulance to the National Court.

A judicial commission headed by García-Castellón visited Enrique Olivares, the man who, disguised as a priest and armed with a revolver, assaulted the Bárcenas house in the Aranjuez prison (Madrid) on 29 January. Autumn 2013. Investigators suspect that Olivares may have acted as a hired hitman for the Ministry of the Interior, within the espionage operation of the ex-Treasurer of the Popular Party, at that time the main threat to the political formation in the Government

The purpose of the visit was to see first-hand the health status of Olivares, who suffered a stroke in 2018 while serving his 22-year sentence in Cuenca prison. Precisely, that vascular accident caused Penitentiary Institutions to transfer Enrique Olivares to Aranjuez, a prison with better accessibility, while the prison technicians weighed if his deteriorated state of health recommended that he be definitively transferred to a healthcare center, according to reported eldiario.es in December 2018.

Unexpectedly, and over the months, Olivares improved. Having completely lost the ability to express himself, he went on to do so with limitations and sometimes with the help of another inmate. This change in its status led to a visit by the judicial commission, which was also made up of the two Anti-Corruption prosecutors in the case, the court clerk and the aforementioned forensic doctor.

The persistence of doubts about the true state of Olivares, 71, and his ability to give testimony led García-Castellón to request a report from the forensic doctor after the visit, the preparation of which has been delayed due to a discharge from the official and the subsequent situation in the National Court derived from the health crisis caused by Covid-19.

The investigations into the role of the false priest are part of piece 7 of the Villarejo case, which investigates the alleged espionage of the ex-treasurer of the PP with the intention of sabotaging the investigation of the National Court by box B of the Popular Party. And they join another important novelty of the case, the seizure of the cell phone number two of the Ministry of the Interior at the time of Operation Kitchen, Francisco Martínez, the day before the state of alarm was decreed. Martínez is accused along with all the commanders of the front line of the political brigade in times of the PP.

The false priest Enrique Olivares is serving a 22-year prison sentence for the kidnapping of Rosalía Iglesias, Guillermo Bárcenas and the home employee Victoria Feliz de la Cruz, among other crimes committed on October 23, 2013 at the home of the former treasurer in the Madrid neighborhood of Salamanca. According to information from Okdiario, Olivares was captured by the police commanders who led the espionage of the Bárcenas, and collected 10,000 euros of reserved funds for the assault on the house in search of the documentation on the PP.

The researchers are trying to clarify the possible link between Olivares and Operation Kitchen. One of the protagonists of the parapolice operation was Sergio Ríos Esgueva, a driver for the Bárcenas family who provided information on the movements of Rosalía Iglesias, once her husband entered prison, and stealing documents in exchange for 2,000 euros per month of the reserved funds .

Ríos ended up collecting 48,000 euros from the Police and received a weapon, as evidenced in documentation seized at Villarejo's home and in information declassified by the Government. On the day of the priest's assault, he told the Bárcenas family that he was going out for a while to visit his then wife, a clerk in a nearby clothing store. He was the first to enter the home after Willy Bárcenas untied himself from his bridles, gave a head butt to the false priest, who was armed with a revolver, and reduced him. When he stopped working for the family, he entered the Police Force, aged 42, and was assigned to a position that is considered a prize.

Who paid for Olivares's lawyer?

At the trial, the accused shouted that voices inside his head gave him orders. The court concluded that he was pretending, although the sentence of the Provincial Court of Madrid recognizes in Olivares a "personality disorder with paranoid, narcissistic and antisocial traits." This diagnosis was worth mitigating and he was sentenced to the penalty provided by law in its lower half, that is, six years for each one of the kidnappings, plus two years for illegal possession of weapons, six months for breaking and entering and other three crimes of threats, also punished with six months each.

Enrique Olivares was assisted by a professional lawyer registered in Madrid throughout the investigation, but before the trial Andrés Ruiz Cubero, a criminal lawyer with an office in the capital and also in Cuenca, from where the false priest is a native, took charge of his defense. that he had been presented almost as homeless. Ruiz Cubero has declared to eldiario.es that he took over the defense of Olivares because he was asked to do so by a client and friend of the Cuenca office that has nothing to do with the police or political world.

The confirmation that the false priest had acted under the orders of the political police of the PP would constitute the most serious fact of an operation designed to benefit the leaders of the PP. The police officers have recognized that they raided a place where Rosalía Iglesias kept pictures with the keys that the driver gave them and that they monitored all their movements with a device installed on her mobile phone in a clandestine way.

They have also confessed that Martínez, the Secretary of State for Security, had a laptop to follow all the news of Operation Kitchen. The terminal is sealed at the headquarters of the General Information Commissary. Those same policemen and the then number two of the Interior defend that the operation was destined to find the front men and the money hidden by Bárcenas. However, neither the judge of box B, Pablo Ruz, nor the UDEF police officers who were acting under his orders, never knew anything about him.

Operation Kitchen was the work of the same group of policemen who participated in prospective investigations without judicial control against the leaders of the sovereign process in Catalonia and who later would use similar methods to falsely accuse Podemos of irregular financing, coinciding with the first time that Pablo Iglesias' party chose to govern with the PSOE, in 2016.