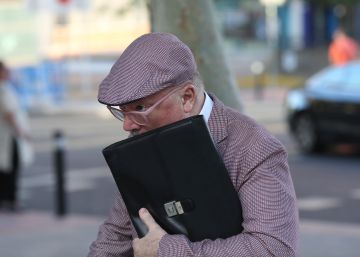 The head of the Central Court of Instruction number 6 of the National Court, Manuel García Castellón, has agreed, at the request of the Anti-Corruption Prosecutor's Office, to cite as alleged for alleged crimes of bribery and disclosure of secrets to the head of security of Iberdrola, Antonio Asenjo, in relation to the contracts that the electricity company would have signed with the commissioner's companies José Manuel Villarejo retired and in provisional prison. According to legal sources, the citation was scheduled for next week, but it has been suspended because Asenjo has recently undergone a surgical intervention that keeps him from medical leave for work purposes and discourages his presence in court. A new date has not yet been set.

Yes, Villarejo himself and his partner at Cenyt, Rafael Redondo, have been called for next week, who are cited as investigated for the same contracts with Iberdrola, according to the sources consulted. Asenjo is being investigated in the separate and secret part number 17 of the Tandem macrocause as alleged interlocutor of Villarejo with the electric one, which would have served in various tasks such as espionage and the attempt to discredit an environmental group or the ACS company and its president, Florentino Pérez, person as injured.

Asenjo's defense last week recorded a brief in court making itself available to investigators and warning that his medical situation would prevent him from appearing in at least one month. By then, the Prosecutor's Office had already asked the judge to summon him as an investigator. The court opened the separate piece last October in the light of both the documentation intervened to Villarejo himself at his arrest in 2017 and the material about his relationship with Iberdrola that they were spreading Moncloa.com and The confidential.

According to the information published by these means, the power company would have commissioned Villarejo several spy jobs from 2004 to 2017. The most slippery is the one that refers to ACS and, specifically, its president, Florentino Pérez. The information highlights that the commissioner would have been hired by the Iberdrola Security Chief, Antonio Asenjo, to spy on the president of Real Madrid when the construction company tried to enter the power management board after having acquired up to 20% of the capital .

Iberdrola announced last October that it would open an exhaustive investigation to clarify how far the relations with Cenyt, the mercantile linked to Villarejo, through which the contracts would have been executed and billed. The report was entrusted to PwC and joins the internal inquiries already undertaken in November 2018 and last July following the dissemination of information that linked the company with the commissioner's company, which is currently in pretrial detention.

In both of them, it was determined that 17 services of the ordinary type and those of the Corporate Security Directorate between 2004 and 2017 had been commissioned and that both the internal controls of Iberdrola had been followed both in the hiring process and in the subsequent billing, as reported by the company itself. LThe electricity payments to the commissioner amounted to 1.13 million.

The temporary contract falls for the first time of 50 days

Second case confirmed in Japan of affected by Wuhan coronavirus