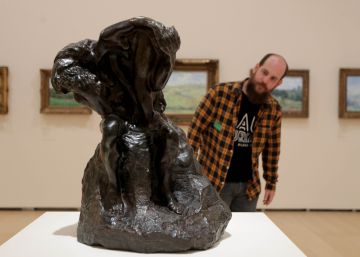 It is not usual for the bulk of a museum's collection to be transferred to another institution. Certain specific pieces lend themselves, travel and return to their original walls, but the art galleries often keep their works, especially the most relevant, (almost) always available to their audience, creating around them visual and conceptual narratives that remain for a period of time. Time as axes of his speech. Hence the appreciation of the “exceptional” character that Christoph Grunenberg, director of the Kunsthalle of Bremen, highlighted from the exhibition presented Thursday by the Guggenheim in Bilbao: Kunsthalle Bremen masterpieces: from Delacroix to Beckmann, a selection of 130 paintings and sculptures that condense the essence of the funds treasured by the German art gallery.

The occasion, as Grunenberg said during the presentation, is due to the fact that the Kunsthalle currently hosts a “spectacular” show entitled Icons: veneration and worship, which displays 60 creations that explore the notion of the sacred through its 60 rooms. "It was therefore a unique opportunity to take our collection abroad," said the director, who said that decisions like this are adopted democratically and independently by the 10,000 members of the museum, founded in 1849. Taking advantage of the trip of this group of works, which will remain in Bilbao until February 16, 2020, the curators of the exhibition (Grunenberg and Petra Joos, from the Basque Museum) have wanted to explore new interpretations of the pieces they own, which span six centuries, but which in the Guggenheim They have been reduced to 150 years: from the beginning of the 19th century until the middle of the 20th century. "We wanted to take the opportunity to show movements that are not so well known," said Joos, who explained that the artistic thread is sewn by the artistic relationships developed at that time by Germany and France. "In the same way that today Beethoven could not be interpreted as in his time, when moving the works to Bilbao we also wanted to show them in another way, although always respecting the score", illustrated the curator.

Neighbors and rivals, mutual admirers, Germany and France generated close artistic ties. Many times, painters traveled to see the production of their foreign colleagues to return to their country and "translate it" into their own creative language. In a tour that goes through classicism, romanticism, impressionism, post-impressionism and the Worpswede artists' colony until it leads to German expressionism, the Kunsthalle pieces show the similarities and differences that were generated between both points of view, which gives place to, as Grunenberg said, to "a very active dialogue." Mixing some renowned works with other lesser-known works, the show highlights, for example, the sweetness and affectation of the color of the French Impressionists (represented by prominent names such as Pierre Auguste Renoir and other darker ones such as Eva Gonzalès, painter of Spanish origin) facing the greater tendency towards realism of her German counterparts, among whom the triad formed by Max Slevogt, Max Liebermann and Lovis Corinth stands out.

Among the most outstanding pieces is the Field of poppies by Vincent Van Gogh, a late painting (from 1889), made during his stay at the psychiatric hospital. His purchase by the Kunsthalle in 1911 raised blisters among its partners, which were then debated between nationalist sentiment and the opening to new artistic horizons. "The director at the time, Gustav Pauli, had a focus on the quality of art," said Grunenberg, who highlighted the importance of prints and drawings within the collection of the Bremen museum, which retains some 2,000 (between 5,000 and 6,000 they were lost in World War II), of which examples of figures such as Caspar David Friedrich or Emil Nolde are shown in the Guggenheim. On the side of the discoveries, the precursor paintings of German expressionism by Paula Modersohn-Becker, a member of the Worpswede artists' colony, are inspired by the French Barbizon model: a space closed to academicism and open to experimentation. The flat landscapes tending to the abstraction of the painter, who died at the age of 31 in 1907, and her schematic portraits, anticipated the ideas of other compatriots also present: the Die Brücke group, Ernst Ludwig Kirchner, Max Beckmann, Oskar Kokoschka . From the sculptures of Rodin to the portraits of Otto Dix, from France to Germany and from Bremen to Bilbao, two port cities and of bourgeois spirit, the exhibition covers a century and a half of cross influences that helped channel the art of modernity. "In Germany and France, artistic movements were often reactions of others," Joos said, "and that is basically proof that tolerance and understanding add up."