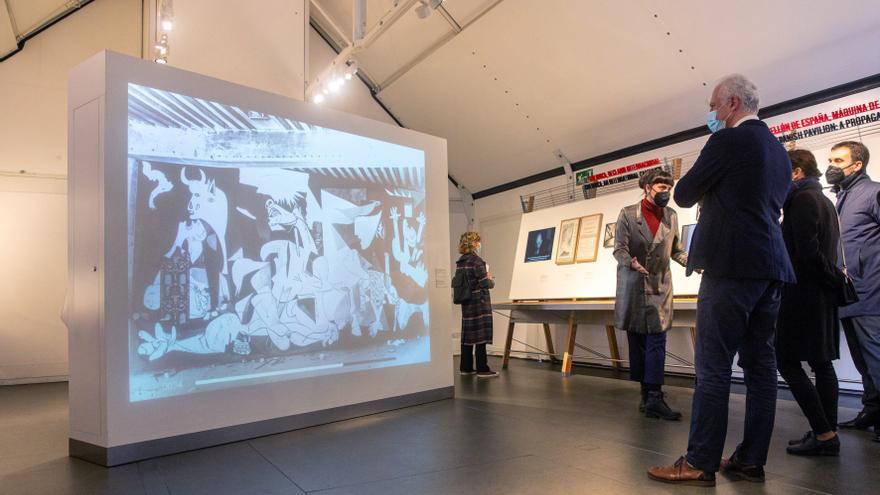 Logroño, Feb 24 (EFE) .- The exhibition “Picasso. The journey of Guernica “, which was presented this Wednesday in Logroño, seeks, on the 80th anniversary of the creation of this painting, to continue with its” clear objective of disseminating the dangers of fascism “through the dissemination of history of this work and its message.

This has been stated by the art historian and advisor to this exhibition Manuela Pedrón, in an information conference, in which the mayor of Logroño, Pablo Hermoso de Mendoza; and the delegate of the “la Caixa” Foundation in La Rioja and Aragón, Alejandra Usón.

Pedrón explained that the title of this exhibition, which can be visited in the Plaza del Ayuntamiento de Logroño until next April 2, responds to the intention of continuing with “that trip of this work that the Republican Government commissioned Pablo Picasso” and that, “for conservation reasons”, it cannot be transferred from the Reina Sofía Art Center Museum in Madrid.

Although it will not be possible to contemplate “Guernica” live, visitors will be able to get closer to the historical context of the time in which it was painted and learn the keys to understanding its importance and meaning, all through audiovisual projections, photographic reproductions and of posters, as well as facsimiles of documents and drawings, has indicated.

In this way, he has continued, those who venture to enter the truck trailer converted into an exhibition space of 100 square meters, will take a historical tour of this work by Picasso from its creation in Paris in 1937 to its permanent location in the Museum Reina Sofía Art Center, in 1992.

This traveling exhibition, organized by the “la Caixa” Foundation and the Reina Sofía Art Center Museum, with the collaboration of the City Council of Logroño, reveals the creative process carried out by the famous Spanish artist to make this work, as well as its meaning anti-war denunciation and the reasons why this painting traveled the world for more than forty years, has highlighted.

“Picasso. Guernica’s Journey” is divided into five areas, which cover the work in its different phases and the important moments in Picasso’s life that were decisive in the creation of the painting.

The ”la Caixa” Foundation has produced several audiovisual pieces to help understand the history of “Guernica” and its influence, among which the audiovisual work of the artist Rogelio López Cuenca and two others of new production stand out, about the historical context of this painting, its technical characteristics and the damage caused by the displacement of the work and its restorations.

For his part, the mayor of Logroño has highlighted that “Guernica” represents “throughout the world the desire of that Spain that is against violence, fanaticism and sad passions”, since “there are still people who ooze hatred, rancor and resentment, and that expels those who do not think like him from a country ”.

This painting by Picasso, which is “a symbol of the struggle for freedom, justice and free thought”, stars in an exhibition that is “for children and young people to see, so that they understand history and not become to repeat ”, he said.

“After forty years of democracy and freedom,” he stressed, “the new generations have to learn that it is not earned ground, that we have to win it day by day, in schools, through coexistence, respect for the different and tolerance, and this is something that is everyone’s job ”.

Usón has indicated that he hopes that this project “will please the city because there is behind an important educational and informative work” on “this emblematic work”, which is revealed through posters, photographs and infographics.