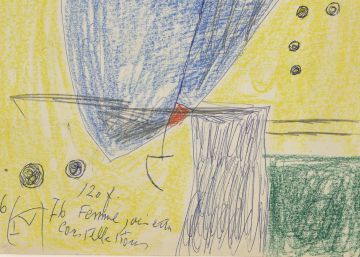 Miró: Constellation Antoni Llena responds to the order that the Fundació Joan Miró made to the Barcelona artist, born in 1943, with the mission of gradually showing the spring of sketches and drawings-collage of its funds that, due to their fragility, are very rarely exposed. Out of a total of 8,000, Llena selected the 150 with which she felt closest, and ordered them by strange families who, now hanging on the walls of one of the rooms of the building of Josep Lluís SertThey make up a dazzling galaxy that could seem very far away. You have to look at them from the height – of ideas and emotions – and not from the earthly, because although primal, they represent the most genuine, dreamy and subversive part of a anti-painter that, in the thirties, revolted against the tyranny of conventions. The exhibition, opened in February at the Barcelona foundation, had to close its doors a few weeks later. There the drawings remain, wrapped again in their impenetrable life, until the future reopening of the center, still without a specific date.

Many of these drawings are the origin of Miró’s best-known works. There are also others that never materialized despite having outlined them repeatedly over the years. Antoni Llena explains that she has chosen the least colorful and also the most iconoclastic: “Miró is an artist who climbs very high, and when he’s at the top, he kicks the ladder and stays there, like another star, holding on for its absolute intensity and radicality ”.

And right there, where like the ether the mountains seem less steep, we can raise our gaze and let it sneakily drop down – lest the abyss increases below us – to reach the ridge, defended by tentacular stars and small circles like birds that seem to communicate with each other to warn of the rain. The sun does not seem to be immobile either, it moves slowly pouring a blue stream over the constellation of lines that occupy the entire room from top to bottom, as if filtered by the walls. Drawings and compositions link emotions, from time to time they leave a void and then return like a breath thanks to the figures, cut out of cardboard or drawn in charcoal, to an enigmatic pebble on a green field, a hair chased by two planets, a face with three noses on a boot or Queen Louise of Prussia, reduced to the figure of a doormat and two breasts akimbo, about to enter the crime scene.

“The most upright artist is here, grotesque, sublime, vulgar, sophisticated,” says Llena. “It is not a spectacular Miró, but here is all the auroral material. He felt the need to extract from the void everything that silently asked to be formalized in a sensible reality. He was an earthly being who worked without a network, he wanted no other roof than the celestial vault, no security that did not rest on the vertigo of existence. He used to say that he painted like chickens, that with their heads they peck the grain on the ground and with their heads up they swallow it. He never wanted to detach matter and spirit. The last Miró does not forget the first and the first predicts the last ”.