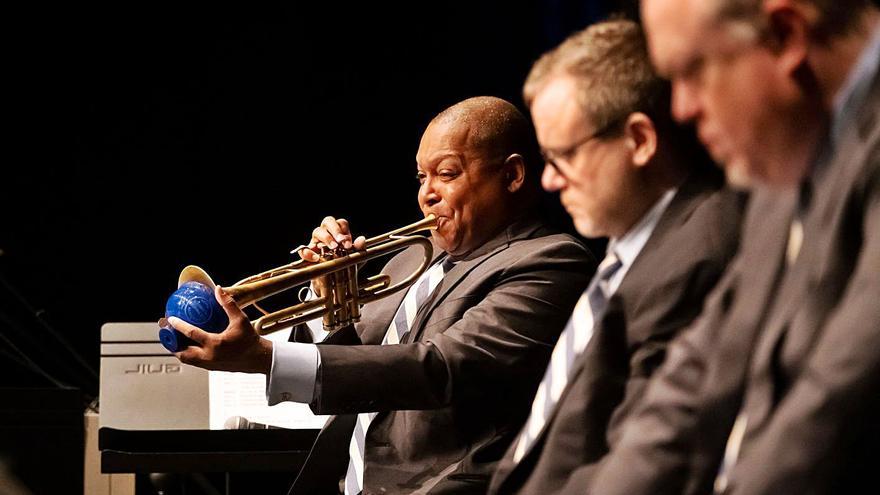 The JLCO started with a declaration of intent, sounding clean, without amplification or monitors on stage, old-fashioned, bareback, only with microphones. And they opened their repertoire with the theme Sleepwalker’s Serenade, a song composed by Neal Hefti, trumpeter and composer of Count Basie’s big band. This cut appears in the 1994 reissue of the album The Atomic Mr. Basie (1958), awarded at the first edition of the Grammy with two awards and considered one of the best of the Count. A lesson in swing, something Hefti mastered to perfection, who signed almost every song on the album and who has written some of the most recognized standards in jazz. The JLCO, directed by Wynton Marsalis, manages to impress upon the first contact with the public the cruising speed and locomotive rhythm that distinguished Count Basie’s big bands.

The next topic was a nod to his time in Spain. The Crave is a composition recorded and written in 1938 by Jelly Roll Morton, which uses Spanish rhythms for a piano style that he referred to as Spanish Tinge. To build this song, arranged for the JLCO by bassist Carlos Henríquez, he took La Paloma from Havana as a reference, but transformed in the style of New Orleans. Good Morning Blues broke through with that halo of sadness that Delta blues have. From this song, composed by Count Basie and Eddie Durham, recorded for the first time in 1937, it is said that the first riffs came out that later gave way to rock and roll.

Marsalis did not depart from that line that marks the blues, giving way to another jewel of the Count Basie repertoire, Blue and Sentimental, written with Jerry Livingston and Mack David in 1938 and recorded for the first time by the Basie orchestra that same year. A subject in which the saxophonists Sherman Irby and Paul Nedzela excelled.

Halfway through the concert, it was already clear the importance that Marsalis gives to each member of the band and the role of director that he occupies without excessive prominence.The concert at that time headed its final stretch with a song titled The Fifties: A Prism Movement II, Just A-Slidin ‘, by his trombonist Chris Crenshaw.