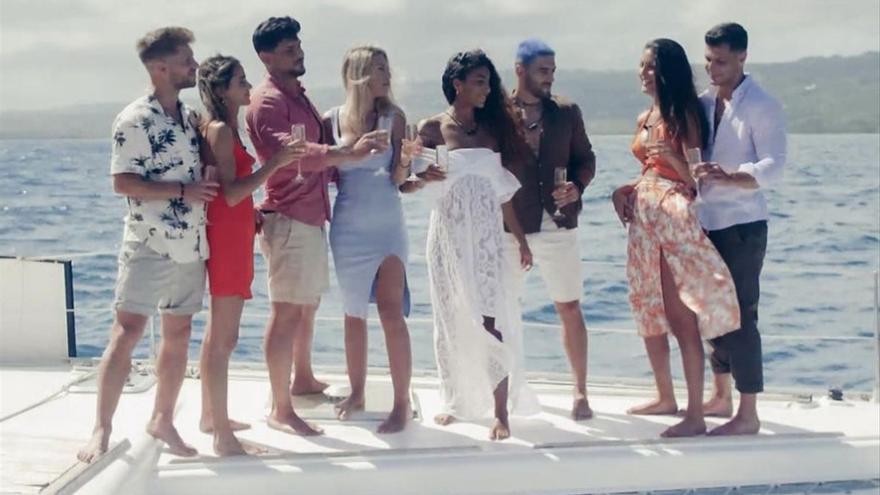 Mediaset has found its goose that lays the golden eggs: each of its chapters –in all seasons, excluding debates– have been audience leaders. The end of the first season even got them one of their best data: almost four million viewers.

Of course, given this success, it is understandable that produced in a Fordist way [en cadena], and do not hesitate to squeeze the format, taking the recipe for success and repeating its ingredients to score bomb after bomb television. Beyond the morbid love, the almost adolescent drama of its protagonists and the emotional ‘voyeurism’, ‘The island of temptations’ It would not be the most successful reality TV show without its star ingredient: casting.

Each of the seasons features practically the same archetypes, both individual and relationship. For example, the girl who wants test the fame of womanizer Her boyfriend’s. There is also the relationship where one of the two at first was not very sure of love, and then ended up falling in love because of his great personality. OR the couple who, after some horns, broke up and, although they ended up coming back, They have decided to go through the program as a “litmus test” to see if “it has really changed.” OR the very consolidated relationship that, before taking a big step, they want to know that they are both seriously going through the program. Finally, the couple of familiar faces who are born in the media spotlight, usually in ‘Women and men and vice versa’, and who now go to the program to continue televising their love.

A set of profiles that can be identified in all seasons, and that, of course, the fourth installment is not going to be less. From Darío and Sandra, who go to the island to show that he is not a “womanizer but someone” worthy of trust “; or Nico and Gal·la, who cheated on him and since then the relationship has been overshadowed by the lack of confidence; or Josué and Zoé, who have been for half a year since they met in ‘Mujeres y Hombres y Viceversa’.

Variations in the format

This rule of ‘casting’ so uniform not only applies to ‘The island of temptations’, but is a common ally in ‘Mediaset reality shows’. From ‘Women and Men and Vice versa’ to ‘Big Brother‘, many of these preset profiles repeat constantly, with variations in its formats, but in all its editions. Same recipe for success, different programs with which to constantly revitalize it.

But Mediaset You haven’t invented garlic soup, and this format doesn’t just stay on your grill. ‘Love Island’, ‘hit’ on British television, also uses many of these ‘casting’ topics. In the show, which consists of looking for a partner, the motivations of the contestants can be divided in practically the same way. For example, there is the one who wants to find true love, the one who has a bad reputation and wants to show that he has changed, the one who comes from another ‘reality show’ and wants to continue recording his love life, and that long etcetera. In short, figures practically molded by the same script whose reactions are predictable, which allows you to get ahead of the participants themselves and have located those that are easier to mount drama, and the romantics that will give a happy ending to the season.

Alejandro, 31, an electrician by profession, and Tania, a 23-year-old lawyer and model, are united by their beauty, which they have exploited professionally. He as Mister Spain 2015, and she as an aspiring miss. In fact, it was at a beauty pageant that they met.

Darío, who studied for the Civil Guard, is the ‘mazado’ of the current edition and is also the womanizer who wants to rehabilitate himself and show that he is someone worthy of the trust of his girlfriend Sandra, a model. They are both 22 years old.

The most famous ones – he is a surf monitor and she is the winner of the Pelo Pantene contest – are also the ones who wear the least. In addition, according to the ‘trailer’ of the season, Zoé, 22 years old, will break the rules to confront Josué, 26 years old. The new Melyssa and Tom?

The surprise couple of the season: two anonymous ones whose information was leaked in a trickle before the premiere. The most consolidated couple and that, due to the advances, it seems that they will not have a good time. Álvaro is a fruit grower by profession and is 22 years old, Rosario studies design and is 21 years old.