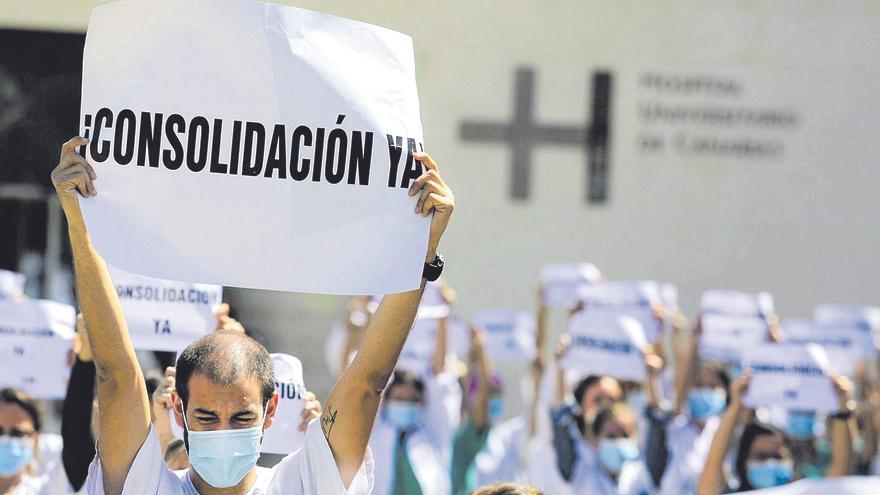 The vote will bring more than 27,000 workers from the Canary Islands Health Service (SCS) to the polls this coming Thursday, June 10, at which time they will be able to decide after five years – the elections have been delayed due to the pandemic – who will represent them during four years. The results will be released on Friday, as the vote count tends to be delayed until the early hours of the morning.

As has become a tradition, the unions that will present themselves in the elections will be the General Union of Workers (UGT), Workers’ Commissions (CCOO), the unions of doctors and nurses (CemSatse), Intersindical Canaria (IC), the Asociación Sindical Autónoma de Canarias (Asaca), the Union of Public Employees of the Canary Islands (Sepca), the Central Independent Trade Union and Officials (CSIF), the Collective of Health Workers (CTS), the Union of Base Commissions (Co.bas) and the Union Nursing Technicians (USAE). However, this year, as a novelty, they will be able to choose between two new unions: the State Union of Superior Sanitary Technicians (SIETeSS) and the Confluence of Physicians (Semca). The latter is one of the most anticipated incorporations, given that the group has been fighting this last year for the stabilization of personnel in temporary abuse in the Canary Islands through a restricted opposition contest.

Precisely the Public Offer of Employment (OPE) is one of the star issues on which most electoral programs deal. With nuances, all include the need to demand from the Ministry of Health the stabilization and consolidation of the workforce. Some request tenure through a restricted offer for personnel who have been concatenating interim contracts for a longer time – such as Asaca, IC or Semca – and others advocate that it is the state government that establishes a legal formula to end this situation – such as CC .OO and UGT–. What they all agree on is that the PEOs should be called immediately and repeated annually or biannually, given that many categories have not had the opportunity to stabilize their place in the SCS since 2007.

The pandemic has also made the SCS understaffing palpable. Not in vain in the last year 3,800 professionals have been hired. However, for many unions it is not enough and they request not only that they become temporary staff – which would lead to conceiving them as part of the SCS – but also to continue expanding their staff. This is the case of CemSatse, which claims an increase in the ratios and a reduction in the quotas of doctors and nurses, especially in Primary Care. In fact, this is another of the demands that it also shares with the independent union CTS.

All agree, likewise, in requesting remuneration improvements to all staff, because since they suffered the cuts of the 2011 crisis, the situation has not been reversed. Finally, there are many unions that have the fight for an update of professional categories in their electoral program. This especially affects nurses (who ask to be included in category A1) and technicians, who are in category C when due to their qualification they should be included in B. This also leads to a series of remuneration differences, a Despite the fact that for years the justice forced the health administrations to modify it.

The star measure of the majority union, which is made up of doctors and nurses and obtained 23 delegates in the last elections, is to stabilize the staff, especially in the case of doctors. What they are asking for is an extraordinary PEO followed by three normal PEOs. They also demand to reverse the salary cuts made in the midst of the crisis and establish salary improvements. Likewise, they are committed to reducing the number of doctors and nurses, with special emphasis on the latter, whose ratios are much lower than in the rest of Spain. Both forces will fight together to improve Primary Care.

Workers’ Commissions achieved ten delegates in the last elections and with them has led to the recovery of the professional career, they recovered 100% of the salary in case of sick leave and recovered the 35 working hours together with the rest of the majority unions, the organic workforce was increased of the SCS and an employment list was agreed to be unrelated to the OPE that has not yet been published. For the next four years, the union representation will work to achieve the partial retirement of all workers and in the OPE, which occupies “70%” of its electoral program. In this sense, work will be done on renegotiating job offers and making them mandatory.

Sepca’s objective is clear: they want to achieve more stability in public employment. The Canarian health sector is one of the most affected by the temporality, and Joaquín Franco, Sepca’s head of the list, denounces that in recent years more than 10,000 places have been offered in health that have never been summoned. “If some places are not called, they will begin to expire,” insists Franco. In addition to its commitment to stabilization, Sepca will strive to improve work-life balance, enforce the prevention of occupational hazards, establish an open and permanent transfer contest and a professional career under equal conditions for all personnel.

Asaca, who won 11 delegates in the last elections, will fight again to create a job bank unrelated to the Public Job Offer that, in addition, entails the repeal of decree 74/2010 of the Canary Islands Health Service (SCS), since they consider that what has been done so far has not resulted in the real untying of job offers. The trade unionists will also ensure the recovery of rights and the solution to the abuse of temporality with oppositions that do not involve examination. Among his achievements is the achievement of several favorable career judgments for workforce.

The UGT obtained seven delegates in the 2016 union elections. During this time, the representation has managed to carry out an agreement so that the health workers could work 35 hours – instead of the 37.5 imposed after the crisis -, the salary increase of the public employees and the stabilization of more than 7,000 temporary workers who have become – or will become – temporary. The UGT is committed to seeking a “legal” solution for the consolidation of personnel who have suffered temporary abuse. Francisco Bautista, head of the list, recalls that it was this union who went to the European Court to have the abuse of temporality recognized.

From the Base Commissions Union (Co.bas), which won three delegates in the 2016 elections, they want to stop differentiating between permanent, contracted and temporary workers, since, as the head of the list, Pilar Barrera, thinks, “Everyone should have the same right.” Likewise, from the union they are betting that there is a fair OPE and that it be convened as soon as possible “because we are waiting.” The union believes that it is necessary to get more union representation to be able to do a better job and thus improve their care in all hospitals and provide workers with the necessary tools to deal with their day to day.

The CSIF, which obtained three delegates in 2016, recalls its important role during the time of the pandemic, since it denounced the lack of EPIS and protocols and achieved the recognition of Covid-19 as an occupational disease for health workers. “We are the only organization that also has the annual audit on its website,” says Carmelo Rodríguez, head of the union’s list. Remember, in addition, that it was this union that achieved early retirement for police and military at the state level who want to expand to health. For the next few years they seek to promote an update of the relationship of jobs and the stabilization of public employment.

The Confluence of Physicians, which has been struggling for “a year” to achieve the consolidation of the employment of physicians in successive temporary abuse, has decided to broaden its perspective. Their main objective is the same as the one they have been fighting for these months: to achieve the direct consolidation of the employment of those who are in temporary abuse. However, on this occasion they will not limit themselves to defending the interests of the doctors, but also the rest of the SCS. In their electoral program they also propose measures to improve the professional dignity of the doctor, to adapt the templates and to protect pregnant women.

The work of the Union of Nursing Technicians focuses especially on the Hospital Universitario de Canarias (HUC), as they consider it to be the center with the most deficiencies, especially with regard to its group. For this reason, the union will not only ensure that the professional categories of nursing technicians are readjusted, but it also seeks that the HUC fully integrate the professional category of caretaker. “This would guarantee that the nursing technicians would stop performing their duties, since it is not our job,” says José Ignacio Mora, head of the union list. USAE will also ensure that the HUC is equated with the rest of the SCS.

The Collective of Health Workers (CTS) intends, in this next candidacy, to continue working on a small scale. The union is represented in health centers and ensures the improvement of Primary Care. Carlos Bayón, head of the list, assures that he will continue working on “specific issues” which are those that he considers can improve the day-to-day work situation of health workers. The union is going to request a limit of patients for the Primary Care quotas as well as a more transparent hiring. In recent years, he has succeeded in having an extraction pump installed in the Cono Sur Health Center, and has improved patient care.

This group also enters this electoral list for the first time, ensuring the inclusion of all specialties within the public system, such as documentation or dietary technicians. “During the pandemic, we realized the great need we have for documentation technicians, since they should have been in charge of the tracing,” explains Rita Botín, head of the SIETeSS list. The union will also ensure that job classifications are updated, including technical professionals in group B instead of C, where they are now included. Likewise, they will ensure that the training hours for this group are equal to that of Europe.

Intersindical Canaria is presented to these union elections with the aim of continuing to demand the improvement of the working conditions of the SCS staff and the defense of public health. With a total of 15 delegates, Intersindical highlights among its achievements the recovery of the 35-hour work week, the awarding of more than 7,000 temporary jobs, the application of the professional career and the adaptation of jobs to favor family conciliation. For the next four years they will continue to claim the defense of public health over private, the consolidation of employment by merit and an open transfer contest.