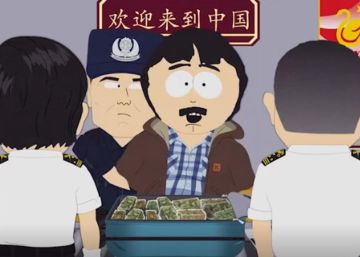 "You have to lower your ideals of freedom if you want to breastfeed from the warm Chinese tit." With this provocative idea, expressed by one of his characters in his second episode of his 23rd season, the subversive cartoon series South Park He has fallen fully on the long list of victims of Chinese censorship, where the NBA also accompanies him this week. The episode, Band in China (A pun on the sound of "band" and "forbidden" in English), is a wild satire of the lack of freedom of expression in this country and the complacency of foreign companies doing business with him.

The series, born in 1997 and that in recent years has evolved in its eschatological mood to become an irreverent satire of today, had already made his first steps when it comes to lash out against China, with episodes like The China Probrem, in the year of the Beijing Olympic Games (2008). But Band in ChinaLast week, he trampled every possible anathema to a Chinese censor: from a mocking use of President Xi Jinping's image to allusions about the re-education camps in Xinjiang.

“To all websites: Delete the episode Band in China of the 23rd season of the American series South Park. Close the comment forums, include the name of the series in the list of prohibited searches and immediately eliminate the relevant resources ”, indicates the note of the Chinese censors sent to the media and internet platforms, and disclosed by the page China Digital Times, which specializes in monitoring censorship in China.

The searches of South Park or the name of the series in Chinese characters yields the same response in the main Chinese platforms: “sorry, no results found. Some results are not shown due to Chinese laws and regulations. ”

The episode broadcast coincided with the controversy in which the NBA has been immersed in China, after the Houston Rockets general manager, Daryl Morey, published – and immediately withdrew – a tweet supporting protesters in Hong Kong. Although finally the president of the professional basketball league, Adam Silver, ended up underlining Morey's right to express his opinion, the initial reaction of the NBA was to issue a statement in which he criticized the “inappropriate” message of the Rockets manager.

The plot of the episode takes place in two parts: one of the characters, Randy Marsh, travels to China to try to do business with the production of his marijuana farm. Imprisoned upon arrival, he is forced to recite praise to the Communist Party of China and finds as a fellow prisoner the Winnie the Pooh bear, punished for his supposed physical similarity to Xi which many Internet users and dissenters have made fun of. In South Park, the gang of children forms a musical band that arouses the interest of a producer. But attempts to launch them to fame – and conquer the Chinese market – clash with the opposition of censors from Beijing, who veto, one after another, the mentions of Dalai Lama, to human rights or homosexuality.

Finally, the children get fed up. "I want to be proud of who we are, boys, and nobody who betrays their ideas just for making money in China deserves a salivazo," says one of them.

A message that, in their own way, has been repeated by the creators of the series, Trey Parker and Matt Stone. In a "Official apology to China" With much retreat, both of them assured on Tuesday that, “Like the NBA, we welcome Chinese censors to our homes and our hearts. We also prefer money more than freedom and democracy. ”

“Xi is nothing like Winnie the Pooh. Watch our episode number 300 this Wednesday at 10! Long live the Communist Party of China! May the sorghum harvest this fall be abundant! ”, They continue, before concluding:“ Have we been well, China? ”.