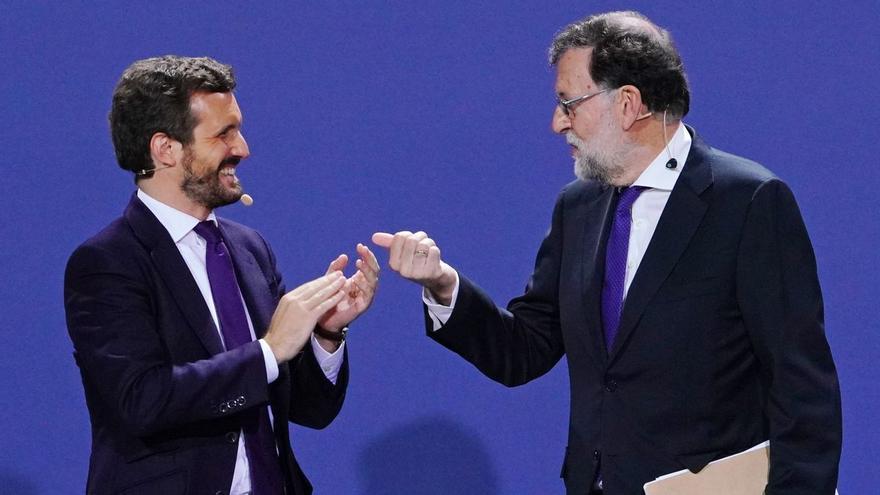 "The PP is much more than ten or fifteen isolated cases". The phrase was pronounced on the morning of May 24, 2018 by the then Prime Minister Mariano Rajoy. The first major sentence in the Gürtel case had not yet transpired - it would do so hours later - which ended his political career after Pedro Sánchez's motion of censure went ahead. But the conservative formation had long been cornered by a cataract of corruption cases that continue to be substantiated in the courts. Various positions of the PP described that judicial resolution as "wrong and erroneous", although it ended up being ratified by the Supreme Court. By then, the former Madrid president Esperanza Aguirre had also pronounced her famous phrase about the two charges that they had come out "frog" of the more than 500 he had named.

Years later, until three sentences They have ratified the existence of a "parallel accounting" with which the popular won general elections for almost two decades. At the same time, other summaries have been reeling off a range of corrupt practices, ranging from box B of the Madrid PP that is being investigated in Punica to the 'primary case' of the Salamanca PP. All this, while the National Court welcomes the third great trial against the conservatives for benefiting from the Gürtel. In this case, in the Madrid municipality of Boadilla del Monte.

The judicial way of the cross does not end for the PP, which on December 14 did receive the good news from the file of part of open investigation against the PP of València and the municipal team that ex-mayor Rita Barberá had in her last legislature at the head of the Consistory (2011-2015). The Provincial Court of Valencia left intact the accusation against Alfonso Grau, then vice mayor, and María del Carmen García Fuster, secretary of the municipal group, but exonerated the municipal PP and 22 other investigated - former councilors and advisers - who had been prosecuted by the alleged commission of a crime of money laundering in the form of 'smurfing'.

After six years of investigation, the instructor and the Anticorruption Prosecutor's Office concluded that, in order to pay for the local elections of 2015, the municipal group had a rudimentary bleaching operation Consistent in that the councilors and advisers paid a donation of 1,000 euros into a party account without control of the Intervention or the Court of Accounts and the municipal secretary returned that amount in two 500-euro bills. The judges of the fourth section, however, have not considered it proven that the 1,000 euros were returned to all the defendants or that they all knew the "bleaching purpose" of that operation, an extreme of which other advisers who did not want to participate suspected of this mechanics.

After this decision was made public, the PP came out in a rush to demand the left to apologize to Barberá, died in 2016, although had been repudiated by much of her party precisely as a result of her accusation in this case, which even led her to testify in the Supreme Court because of her status as a registered person. “I defended the honor of these innocents because I believe in them. Now PSOE, Podemos and Compromís ask for forgiveness and do not accuse the false again, ”said the party's number two, Teodoro García Egea. “Rita Barberá was innocent and so were her companions. Some of us never doubt it and now justice confirms it. Congratulations to all and let's preserve the presumption of innocence, "wrote former President Mariano Rajoy on his Twitter account.

But the joy in the PP did not last long. A day later, on Wednesday, December 15, the echo of the irregular financing of the PP was heard again in court. In this case, in a courtroom of the National Court and by the mouth of Gürtel's main investigator, Inspector Manuel Morocho. In his appearance as a witness in the trial for the performance of this corrupt plot in the Madrid municipality of Boadilla del Monte, the police confirmed the use of commissions for PP campaigns in that town. But not only. As he explained, this dynamic of collecting bribes from companies to which they awarded rigged contracts and the subsequent diversion of part of those funds to the campaigns also occurred in other territories where Gürtel was at ease.

In a similar sense, the one who was councilor of the municipality for the PP between 1999 and 2009, Arturo González Panero, had expressed himself days before in his statement as a defendant. The ex-mayor affirmed that the PP gave him instructions that part of the expenses of the regional campaigns of 2003 and of the general ones that were held a year later had to be paid "outside".

He also claimed to have received "calls from Moncloa" during the presidency of José María Aznar and directives from the regional president of the party, Pío García-Escudero, in relation to various people and actions of the Gürtel in the municipality. González Panero confirmed point by point the City Council's relationship with the plot, according to which, he took a bite for awarding companies of the plot or a commission, together with the head of the network, for those contracts to go to third parties.

Until seventeen defendants in that trial they have recognized the facts attributed to them by the Prosecutor's Office, which defends that part of the bites went to finance the aforementioned electoral campaigns. In fact, the political formation faces its third sentence in this procedure, the second as a lucrative beneficiary of the money from Gürtel's corruption.

The party was condemned in the first instance by the National Court in May 2018, in the first sentence that confirmed the existence of irregular financing in the PP. At that time, the special court admitted that "parallel accounting" was not the subject of its ruling, but the magistrates considered that it was a necessary "context" to explain Francisco Correa's network. That resolution triggered the motion of censure by Pedro Sánchez and ended up putting an end to the political career of Mariano Rajoy.

Two years later, in October 2020, the Supreme Court confirmed that ruling although it eliminated allusions to the existence of a box B. The judges justified this decision - "inconsequential in the ruling," they warned - on the fact that it could not have criminal responsibility without any accusation or defense. The PP took advantage these passages to affirm that the motion of censure presented by the Socialists was based "on lies." But the judicial truth prevailed again just twelve months later. On October 28, a third resolution confirmed that there was a "parallel accounting" in the PP "of whose income and expenditure was not recorded in the official accounting nor was it audited by the Court of Accounts."

Part of that money, coming from "donations" that were received "always in cash", was kept in a safe located in the office of former treasurer Luis Bárcenas, and was used to pay for the reform of the headquarters from which the party now wants to flee. In fact, the PP added another sentence for these events. This time, as a subsidiary civil liable for the tax crime committed by Bárcenas by paying part of the works with funds from box B behind the back of the Treasury. In the ruling, the judges indicate that there is no record that the party, through its governing bodies, exercised "adequate control" over the "management" of its manager. And they affirm that it only took measures regarding him and, in general, internal audit after the events occurred. A audit thatFurthermore, no irregularity emerged either.

Bárcenas reported these inflows and outflows in his famous papers, "some sheets that he filled in with handwritten annotations and later in Excel sheets," says the sentence. The magistrates indicated that they contain balance errors and not all deliveries were duly noted, but they have no doubt of their veracity. "They reflect events whose reality has been proven, such as transfers to official donation accounts, deliveries of money to certain people linked to the Popular Party or payments for reform works," they stressed.

In addition to those judgments that prove the "parallel accounting" at the national level, other summaries have been reeling off alleged corrupt practices linked to the party in other territories. On November 24, a judge in Salamanca charged the provincial PP, its president, Javier Iglesias and his manager, Isabel Sánchez González, for the alleged case of illegal party funding in 2017, during the primaries that the current president of the Board, Alfonso Fernández Mañueco, finally won.

The judge is investigating whether there is justification for the more than 60,000 euros that party officials contributed in the form of "altruistic donations" to update unpaid fees from militants and that they could vote for Mañueco in that internal consultation. The initial complaint was filed after those charges affirmed that they had put money to pay debts to third parties, but the case was reopened after an appeal by Foro Izquierdas-Los Verdes, which asked to determine "if there are rational indications of the possible commission of a financing crime illegal political party, or, on the contrary, there is only a payment of the debt of others. "A few weeks ago, the court appreciated the existence of evidence of crime and again summoned the president and manager to testify this December.

On the other hand, the National Court investigates in the framework of the 'Punic case' alleged contract fixes, bribes and illegal awards in different administrations, the majority in the hands of the PP. In this case, the former presidents of the Community of Madrid Esperanza Aguirre (2003-2012) and Ignacio González (2012-2015) are being investigated, to whom the investigators attribute a decisive role in the machinery supposedly set in motion under the mandate of the first to divert money from Madrid to the accounts of the regional PP.

The summary of this case places both in a meeting that is considered key in the irregular financing system of the Madrid PP. In their statements in court, both Aguirre and González discharged all responsibility for economic matters in which he was manager of the regional PP Beltrán Gutiérrez and they denied the existence of a Caja B in the formation. And that despite the high responsibilities that both occupied in the years in which they were in the first political line.