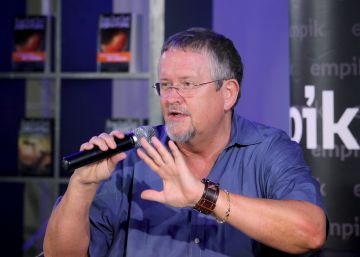 Spanish science fiction is at war. Since the Celsius, the festival of the fantastic held every summer in AvilesHe announced to Orson Scott Card as headliner of this year’s edition, many have been the national and international authors, who have shown their discomfort in this regard. But the thing is reaching the unthinkable extreme that a group of, until now, followers of the festival, have proposed to organize this summer an act of protest that would consist of “burning books” of their most controversial headliner to date . “What is the point of something like this at a festival called Celsius 232 in honor of Ray Bradbury’s work that precisely attacks censorship that involves the burning of books?” Cristina Macía, one of its directors, asked yesterday. “Perfectly understand” the position of those who are declining their invitation to the festival for not sharing space with the author of Ender’s Game, but insists that “he is not invited for what he thinks but for his books.”

Orson Scott Card was a myth, from the literary height of Isaac Asimov, William Gibson, or his own and closer, even in ideology, since both are Mormons, Brandon Sanderson, until he began to charge against gay marriage more than a decade ago. Then, those who had read his books, the most famous of them all, Ender’s Game – Awards Hugo and Nebula in 1986 -, they began a review of their work in which they found clues everywhere. After all, the protagonist of the famous saga is a transcript of Joseph Smith Jr., founder of the Mormon church. But the work, full of nuances, was never judged, nor has it been judged, homophobic. However, his writings and statements, yes. For example, Card said that gay marriage was going to mean “The end of democracy in the United States” and that homosexuality “is a mental illness.” And not only has he said it, he has aligned himself with groups that have actively fought against the rights of homosexuals considering that “they should not be treated as citizens on equal terms with the rest.”

Javier Ruescas, author of youth fiction and key piece, since its inception, of the festival, is one of the three authors who have declined for the moment the invitation this year – the other two are Iria G. Parente and Selene M. Pascual -, in the which, he says, has been a “very thoughtful” decision. “We could have decided to go so as not to give up our space, as other national and international authors have done, but after meditating it a lot separately and talking to each other, Iria, Selene and I decided to refuse the invitation. We believe that giving a man a voice like him is to take a first step towards something very dangerous: bleaching homophobia in a clear way, and the fact that we go, as has been demonstrated on other occasions, would give publicity and content to a edition of the festival that legitimizes the presence of someone who goes against our rights, ”says the writer, who, as such, assures, does not buy the organization’s argument that“ one thing is books and another, the author ”because, He says, “I think we all leave part of who we are in our art.”

We believe that giving a man a voice like him is taking a first step towards something very dangerous: whitening homophobia in a clear way

Card’s profile (Richland, 68 years), increasingly radical, forced the producer of the film adaptation of Ender’s Game to dispense with his figure during the promotion of the film in 2013 for considering that “it was going to do more harm than good.” At that time, he made statements to the American magazine Wired in which he kept charging against homosexuals. “They ask us to be tolerant of them, but they do not tolerate our thinking,” he told the journalist. “At what level does everything that is happening in Celsius hurt?” Ruescas tweeted yesterday for his more than 80,000 followers. “At the level that, apart from loving the festival, I was a big fan of Orson Scott Card, I even queued up to meet him,” he said, and showed a picture with him. “Years later I found out what I hated people like me and that I struggled to take away my rights,” he concluded. Two international authors, the Chinese Marie Lu and the American V. E. Schwab, invited this year to the festival, which will be held in mid-July, also discussed on Twitter about the possibility of not going to protest.

“Many readers have asked me to decline the invitation as an act of protest but if I give up my space to intolerance, intolerance wins,” wrote Schwab, bisexual and author of A darker magic (Minotaur), who alerts the festival about “the terrible posture” that he thinks he adopts when inviting Card. “I think it’s a generational problem,” said Sofia Rhei, another Celsius regular. “It’s the crystallization of the changing times. What we are seeing is a turning point. While those under 30 are clear that they refuse to share space with someone like that, older people like me, we doubt, and we start to question ourselves, ”he added. From the organization, it is denied that the Celsius will cease to be “a safe place as it always has been” for the LGTBI collective and insists that “nothing will change”. “We have been organizing a festival for nine years with very clear objectives, not only in regard to parity, that we have achieved it, and censoring ourselves this way would be going backwards, something we do not plan to do, because our criteria He has responded and responds to the exclusively literary, ”Macía said.