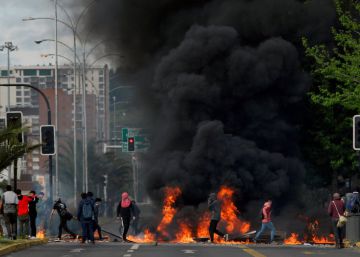 Mexico is the most obvious example of an economic maximum that is strictly met: without investment, public and private, the possibilities of growth are minimal. And Chile, that the political and social instability caused by a very unequal growth affects, and much, the proper functioning of the economy. Both factors in the extreme north and south of Latin America will push down regional GDP this year and next, up 1.6% and 2.3% respectively, one and two tenths less than expected in last October, according to figures published this Monday by the International Monetary Fund (IMF) within the framework of Davos Forum. The counterweight puts it Brazil, by far the greatest regional economic power, where the greatest dynamism This exercise will inject some strength into the activity of the area. However, the expansion of the Latin American and Caribbean economy will be significantly greater in 2020 and 2021 than in the year just ended, when it barely exceeded 0% (0.1%).

The downward corrections for the Latin American bloc, the Fund’s technicians point out in their forecast update, “are due to a cut in Mexico’s growth forecasts. [1% este año y 1,6% el próximo, en ambos casos tres décimas menos de lo esperado hasta ahora] for the continued weakness of the investment and an important downward revision of Chile’s growth, which has been affected by social tension. “To know the size of the dentellada on the economy of the South American country, we will have to wait a few weeks, when The Chilean statistical office makes the 2019 expansion figure public, but the Washington-based entity anticipates, in its own way, that it will be important.

On the opposite side, the body that commands Kristalina Georgieva slightly revised upwards the Brazilian forecast for this year – in two tenths, up to 2.2% -, a whole rarity in a world chart marked by downward corrections, and leaves its forecast for 2020 virtually intact, when Brazil should grow 2.3%, only one tenth below what was forecast last October. In the Latin American giant, the Fund appreciates an “improvement” after the approval of the pension reform, which reduces pressure on public accounts, and after the “dissipation of supply disturbances in the mining sector.”

The reduction in growth projections is not limited to Latin America and the Caribbean. In its update this Monday, the IMF reduces its forecast for the global economy by a similar proportion (one tenth this year, two next). Also for all emerging countries, which see their expectations cut by two tenths each year, up to 4.4% and 4.5%. The tijeretazo arrives, mainly, as a result of a worsening in the economic horizon of the Asia in development, a region that sees its expected growth reduced by two tenths this year and by three next year. That decline helps, however, to the growth gap between Latin America and the rest of the emerging countries, a constant in recent years, are slightly shortened: after closing 2019 at 3.6% of GDP, it will fall to 2.8% this 2020 and up to 2.3% in 2021, about levels – even so – very high.

Forgotten the call Washington consensus, and after the shift towards a more social tone, the Monetary Fund now sees “crucial” that emerging countries (including, of course, also Latin Americans and Caribbean) guarantee the existence of “adequate safety nets to protect the vulnerable” . “Throughout the group, the general common goal is to achieve more inclusive growth based on health and education spending to enhance human capital, and, at the same time, encourage the entry of companies that generate high-value jobs. aggregate and employ larger segments of the population. ” It is the recipe of the Fund to avoid a new social outbreak like the one experienced in recent months in Colombia, Ecuador and, above all, Chile, after years of unbalanced growth. Its consequences have already begun to take a toll on GDP.