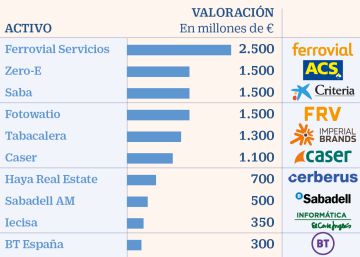 The month of December is one of the moments of frenetic activity in investment banking. Financial advisors work this week piece by piece to close the operations they have been working on in recent months. Thus, these operations can be incorporated into the advisors' balance sheets. And also be able to guarantee a bonus for Christmas, the bonus for closing operations.

Thus, the sector expects to complete another particularly good year in the mergers and acquisitions section, which compensates for a devastating exercise in other areas, such as IPOs. Until September, transactions for more than 53,000 million were closed in a total of 1,664 operations, according to TTR data. A figure backed by the vigor of venture capital. The Spanish employer of private capital, Ascri, expects the investment of the sector in Spain in 2019 to set a record for the third consecutive year.

And that is still pending some of the largest operations in the Spanish market. On the table of investment bankers there are operations for almost 12,000 million value. If all goes well, they will close in the coming weeks and will trigger the amount of mergers and acquisitions made so far this year.

One of those pending operations is what has been the crown jewel of the sector throughout the year, the sale of the Ferrovial services division. The company led by the Del Pino family commissioned Goldman Sachs during the first quarter to divest this subsidiary to focus on the construction and concession businesses. The company received the first non-binding offers before summer, among which were those of Apollo, Apax, Brookfield and Platinum. Everything indicates that Apax will keep its business in Spain and Apollo with the Australian, although the other two competitors have lagged behind.

Ferrovial, meanwhile, has lowered its initial economic claims, which were around 3,000 million for the entire package. The consulted sources affirm that it will foreseeably be closed around 2,500 million, although everything depends on what happens with the leg of the United Kingdom, once it has closed its conflict with the City of Birmingham.

The other Spanish infrastructure giant, ACS, is also in the process of selling. In this case, try to take advantage of the appetite for renewable energy to place one of its subsidiaries in the sector, Zero-E, a spin-off of Cobra. Priced at around 1.5 billion, it has already received offers from BP, Endesa, Brookfield, Macquarie, CPPIB and Sanghái public power company, interested only by one party. The Chinese capital is also interested in another renewable energy company, Fotowatio, which the giant Three Gorges tempts.

The market also expects to close three other large operations, of more than 1,000 million. One of them is Saba, where Criteria already negotiates exclusively with Proa to gain a minority stake and seeks a co-investor. In parallel, four insurers – National Netherlanden, Ageas, Helvetia and Saint Lucia – have until tomorrow to present the binding offers by Caser. And it is also planned that Imperial Brands will close the sale of the cigar business of Tabacalera among some of the largest in the sector.

Smaller is Haya Real Estate, where Cerberus has also been forced to cut its price expectations to around 700 million to try to close a liza operation for almost two years. First he threatened with an IPO, and then commissioned a bid from which Centricus has emerged victorious, a fund of the Japanese giant SoftBank. In the financial sector Banco Sabadell also expects to vent its balance with the second sale this year, that of its fund manager.

The resolution of another operation that has been on the table for more than a year also seems imminent. The English Court exclusively negotiates the sale of its IT division with the HIG venture capital fund and the GFI computer group for some 350 million. Already in the autumn of last year he was about to sell this company to Kio Network.

The medium market (in the jargon) also expects a shower of operations. Among them are two carve-outs (sale of subsidiaries in one country) of BT's business in Spain –which are held in Portobello, Orange and MasMóvil– and Conforama.

Beyond the operations that remain to close in this month, the investment bank already works with the sights set on the operations that will crown the next year. Morgan Stanley is already working to find a minority partner for IVI, a Spanish leader in the assisted reproduction business. The market also expects Suez to launch the sale of Aguas de Barcelona, ​​advised by one of its shareholders. And, of course, the resolution of a key operation, the taking of the stock exchange manager, BME, is expected. The mystery is still in if the owner of the Paris Stock Exchange, Euronext, will dare to deal with the offer of Six, owner of the parquet of Switzerland.