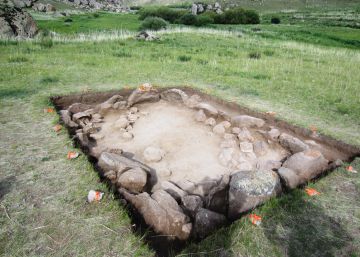 A few years ago, invited by a state agency in Kazakhstan, I visited Astana, the futuristic capital of the country created in the middle of nowhere. For hours the plane flew over the flat landscape, without trees and uninhabited from the endless Central Asian steppe. The city is dotted with unique buildings that are distributed in no apparent order and among which the Bayterek – a white tower almost 100 m high topped by a golden sphere – or a gigantic pyramid designed by Norman Foster. In spite of being spring, the Ishim river was still buried under 15 meters of snow. In winter it is common for temperatures to fall below -40 degrees, which is when, they told me, most vehicles stop working.

At the end of the official dinner, the director of the agency, who sat on my left and spent half an evening putting on my plate various sausages of horse meat – the most appreciated meat in this country- a small parliament delivered, everyone got up and we had to drink a glass of vodka; then the diner on his left did the same and so on. With a quick glance I realized that we were fifteen people at the table and that I was going to have to make the last toast.

After this memorable trip, three things became clear to me: the hardness of the steppe environment, the importance of the horse and the realization that the steppe is like a highway that connects China – to the east – with Europe – to the west – and with India -to the south-.

The steppe is an arid and cold ecosystem, which occupies a huge and flat geographical area. The traditional way of life was nomadic pastoralism, since this environment did not have enough fertile soils to practice agriculture and thus allow fixed settlements. The cold of winter determined the survival of nomadic groups, which depended on horses, sheep and goats – from which they obtained wool, leather, meat, milk and cheese.

Throughout history, various invasions of nomads from the steppes, such as the Huns of Attila, the Seljuk Turks or the Mongols, have impacted in western Eurasia. The cultural and political consequences of these invasions have been enormous, and not only in terms of human lives (it is estimated that the Mongols killed no less than 40 million people). A recent study concluded that the devastation caused by the Mongols caused numerous farmland to be abandoned and colonized by forests that in turn absorbed about 700 million tons of carbon dioxide – effectively changing the planetary climate. But there were also genetic consequences; Genghis Khan had hundreds of concubines, and his children and grandchildren ruled huge empires and in turn had hundreds of women which increased exponentially their lineage of the Y chromosome (which is transmitted from parents to children). It is estimated that 0.5% of the men on the planet (about 16 million, preferably Asians) carry the original Y chromosome of the Mongol conqueror in their cells. In the phylogenies of human Y chromosomes, this type of "explosive" radiation creates a star shape whose central nucleus is the genetic lineage of the founding individual from which, as generations have passed, other secondary lineages are diversified. Interestingly, Genghis Khan's is not the only one that has been detected. In northeastern China, another very abundant lineage of the Y chromosome seems to derive from the family of Nurhaci (1559-1626), who unified the tribes of Manchuria and reigned over them.

It is estimated that 0.5% of men on the planet carry in their cells the original Y chromosome of the Mongol conqueror

Genetic studies have revealed that in prehistoric times, 5,000 years ago, another great invasion of nomads from the steppes modified the European genetic landscape, from the plains of the east of the continent to the Iberian peninsula itself. In the study we publish today in the magazine Science – where numerous samples from Kazakhstan have been included – we have been able to verify that a second wave of these nomads from the steppes of Central Asia, popularly known as indoaries, penetrated the Indian subcontinent and modified the genetic composition of local populations. In parallel, it probably contributed to the disappearance of the Indus Valley culture (which is, along with Egypt and Mesopotamia, one of the three greatest ancient civilizations). The Indus civilization reached its peak between 5,000 and 3,300 years ago; some cities, like Harappa or Mohenjo-Daro had tens of thousands of inhabitants; These cities were built with bricks and had sewage, running water, streets, barns and public buildings. Attempts have been made to explain its disappearance due to drought episodes or the change in the course of the river, which today passes kilometers away from the ruins. But some historians maintain that the cause was the arrival of the invading invaders.

The steppe emigrants also introduced an Indo-European language in India – Sanskrit – and created a strong social hierarchy whose expression, in the form of castes, still persists in Indian society. The steppe component shows its maximum value in the genome of the upper caste, the Brahmins, and decreases in the lower castes. It also decreases geographically, as local populations move away from the invaders entry point. The fixation of the Nazis with the Aryans – which they imagined as a civilizing force – contributes to this being a sensitive issue in the Asian country, which in a way constitutes another example of the complex interweaving between genes, culture and history that Now we can explore with archeogenetic studies.

Carles Lalueza-Fox He is a geneticist at the Institute of Evolutionary Biology (CSIC-UPF) in Barcelona.