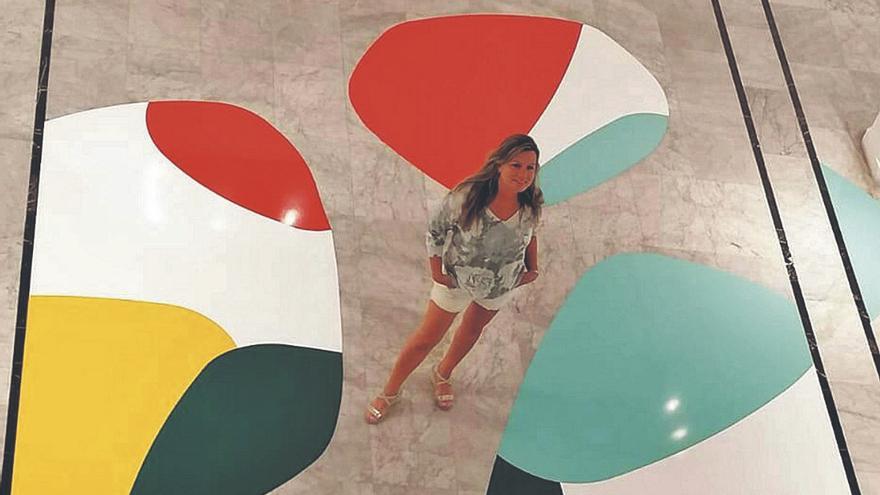 Under the title Armonía Abstracta, this representative sample of the trajectory, languages ​​and techniques of the artist from Gran Canaria awaited its release on April 24, 2020, after the disassembly of the previous exhibition that exhibited the room, Para me la culpa, para you apologize, by the Tenerife artist Miriam Durango.

And then the world upheaval took place that confined life from the inside out and froze all plans in the fog of uncertainty. Urréjola’s was the first great individual retrospective programmed in the capital of Gran Canaria that plunged towards the abyss of quarantine, but it would also become the first show to re-float in the second wave of the pandemic, within the restrictive conditions that still prevail. daily routine.

“The situation of the pandemic gave full effect to the exit of this project, in which I had been working for two years,” says Urréjola. “A month before the scheduled opening date, I had everything completely prepared, with high expectations, just pending finalizing the final transport and assembly details.” “And when they confined us, all that work was on standby,” he adds.

The artist relates that this exhibition project is of “great importance” in her artistic career, since recent works coexist with works from previous stages, with the aim of showing the vertebral lines of her pictorial production as a whole. “This was a very well thought-out and prepared project, with which I committed myself with great enthusiasm since Alejandro Vitaubet proposed it to me. [director de La Regenta] and because, in addition, it opened in a wonderful room, so I worked hard to be able to present new work, with new materials, “he says.

Like the rest of the spaces dependent on the Culture area of ​​the Government of the Canary Islands, La Regenta announced its temporary indefinite closure on March 13, 2020 and, as the state of alarm continued, questions proliferated about how to They would reinvent museums and their dynamics in the context of post-confinement de-escalation.

Regarding the horizon of his exhibition, Urréjola explains that resignation gradually became learning. “In the end, I learned to relativize, because I think many and many of us realized that most things are older than us and are not really in our power, so as there was no other option than to adapt to the situation of the pandemic , because they are causes of force majeure, I approached it as an apprenticeship ”, he affirms. Precisely, the artist tells that, on the day scheduled for its inauguration, “I poured myself a glass of wine and toasted at home for what could not be.” “And then I continued to wait,” he recalls.

Meanwhile, the debate around the new museum models in the context of Covid-19 raged in the digital environment, given that the limitations imposed on the meeting and the crowds pulverized the system of mass calls and initiatives of impact of the great museums, halls and art fairs. Thus, in the run-up to the “new normal”, Health broke down a protocol of specific measures for museums, such as the calculation of capacity and guided tours for small groups; the prohibition of mass inaugurations and the prior registration of visitors; the definition of a one-way itinerary; the substitution of audio guides for apps and QR codes; and signs of safety distance between visitors, artists and works.

Finally, La Regenta reopened its doors on June 4 and one of the first decisions announced by the museum was to extend the exhibition time of the Durango exhibition until August 29. In this readjustment process, Abstract Harmony was finally relocated on the calendar, with a scheduled date of September 18. By then, the utopia that virus circulation would languish after a naive summer was crumbling amid announcements of outbreaks and more restrictions. But the world of culture and art in the Canary Islands kept its doors open despite fear, under the maxim that “culture is safe.”

The inauguration of Abstract Harmony was held without major announcements or displays, with tours restricted to 10 people – nine, not counting the artist – every 20 minutes, upon registration on the La Regenta website. But as its name suggests, Abstract Harmony breathed joy and serenity through its colors and shapes in abstract and undefined times. This is how Urréjola remembers it, who occasionally attended the room to ask about the reception of the exhibition in such complex circumstances, in which “people need more than ever to delight and feed the soul,” he warns.

“They told me that people left enchanted and that they even saw it again, because the colors and shapes of the works gave them back light and hope in these dark times,” reveals the artist, who highlights the effort made by the museum to record the tours and explanations of the pieces to give them greater visibility.

However, the flight of Urréjola’s colors has continued its trajectory through different rooms of the Archipelago, such as the Cabrera Pinto Art Room, in La Laguna, where it is exhibited until today, and with dates scheduled in La Palma in summer. Because the resilient force of art is greater than any virus.