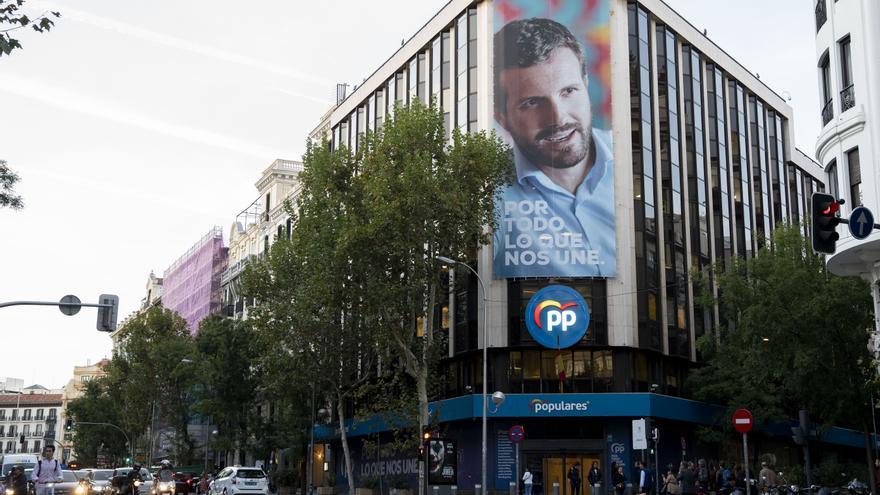 When the leader of the Popular Party, Pablo Casado, announced on February 16 that the conservative formation would leave its historic headquarters of Genova street in Madrid in order to break with the corrupted past of which the iconic building was a partFrom the leadership of the popular they insisted that the move would be “imminent” and that it would take place “when before.” Without assuming more responsibilities, the departure of the headquarters was the only internal decision adopted by Casado after the debacle registered by the PP in the Catalan elections, in which it obtained the worst result in its history and was surpassed, for the first time in an election, by the extreme right of Vox.

A month and a half after the controversial announcement, not only the transfer has not yet taken place, but the Casado team still has not specified the new location, and has not even explained if the current headquarters will go up for sale, it will be chosen to put it up for rent or its requalification will be sought to give it, for example, a housing use. “When there are news, we will inform,” they limit themselves to pointing out again and again the official sources of the leadership of the Popular Party that, when asked about the place where the new headquarters will be, insist that “there is no decision made at the respect”.

Popular leaders consulted by elDiario.es attribute this delay to the internal struggles that the conservative formation has suffered for weeks and those that blame the general secretary of the PP, Teodoro García Egea, who is in turn in charge of Casado to manage the departure from Genoa 13. The number two The party, these sources point out, has been “focused” on putting out the internal fires that have arisen in the last month and a half and that have confronted the national leadership of the PP with the territorial barons with the greatest institutional weight.

One of them, the president of the Xunta de Galicia, Alberto Núñez Feijóo – the only regional leader who governs with an absolute majority -, considered as Casado’s internal counterweight and who is identified with a more moderate profile than that of the state leadership, He already expressed his reluctance to change headquarters as soon as it was announced by the national leader of his party. “If every time a party has problems with some people it has to leave the place where it is, it is because here there was no headquarters left,” he lamented in TVE.

Other leaders consulted by elDiario.es were also then “scandalized” by Casado’s decision to leave Genoa 13. “What fault will the headquarters have that there have been corrupt?” In private, these popular positions assured that the barons were very displeased with the management of the national leader of the PP who, according to them, “walks aimlessly” as the maximum head of the opposition.

Different sectors of the party did not like at all that Casado tried to restrict the march from the national headquarters to a break with the party’s corrupt past. “We must not continue in a building whose reform is being investigated this week in the courts,” said the PP leader, alluding to the judgment on the so-called box B which has been taking place for several weeks in the National Court, and in which José María Aznar, Mariano Rajoy and María Dolores de Cospedal, among other ex-presidents of the PP, have testified as witnesses. The leaders consulted insist that, in reality, behind the transfer there were only economic reasons.

García Egea, the manager of the move, acknowledged those treasury problems days after Casado’s announcement. “We have already paid many mortgages. There is a mortgage that we have paid and that we are paying, which is the one on this building, and then there are other mortgages that we are paying by people who took advantage of our acronym for their own benefit,” he said in a interview in The sixth. “We want to cancel both, the headquarters and the others,” concluded Casado’s ‘number two’. According to him, despite the debts, “the financial sustainability of the PP is now fully guaranteed.”

The latest accounts published by the party, corresponding to the year of 2019, however, show the financial problems that the PP has been going through since 2018, after accumulating successive electoral defeats that have reduced its public income, and that, nevertheless, could now be stopped with the sale of the headquarters in Genoa 13. According to these accounts, at the end of 2019 the training owed the banks more than 38 million euros in different loans and mortgages.

The figure is similar to what the PP could receive in the case of opting to sell its historic building, according to the portal idealistic. His estimates suggest that, taking into account the current situation of the real estate market in the capital, the sale price of the headquarters would reach 36 million euros. Always according to the aforementioned real estate portal, the PP could ask for 30 million for the transaction of the offices, distributed in nine floors, and another six million euros for the 93 parking spaces. In total, the building has 10,243 square meters.

Apart from the internal differences due to the departure of Genoa 13, in recent weeks new discrepancies between Casado’s leadership and some of its barons have become evident, mainly due to the “authoritarian” practices attributed by various leaders precisely to García Egea. The secretary general was in charge of commanding the operation to convince the turncoats of Murcia to do derail the motion of censure against the popular president, Fernando López Miras, which has already generated internal suspicions.

And, since last week, García Egea’s internal movements have confronted him, for different reasons, with three important barons who also have institutional responsibilities: the president of the Community of Madrid, Isabel Díaz Ayuso; that of the Junta de Andalucía, Juan Manuel Moreno Bonilla; and that of Castilla y León, Alfonso Fernández Mañueco.

The differences with the Madrid candidate for re-election were due to the signing of the former leader of Ciudadanos, Toni Cantó, for the list of the elections on May 4, which was negotiated directly by the number two of Married. The popular Madrilenians assured that Cantó’s was an orderly signing “from above”, alluding to the direction of Casado, and that it occurred without Ayuso herself, candidate for the Presidency and number one on the list in which he will go. ex-leader of Ciudadanos, would have given his final approval.

The Madrid president, however, finally accepted to incorporate him as number five and this Wednesday, during the presentation of her candidacy, she wanted to resolve the internal crisis praising the ex-leader of Ciudadanos whom he considered “a very special Valencian asset”, which can offer “a lot and good” to the PP. “He is a man who passionately defends his ideas and who does not hesitate to fight all the battles against any injustice committed by nationalists, extremists or other enemies of freedom,” he concluded.

The confrontations between Casado’s team and Moreno Bonilla and Fernández Mañueco have to do, on the other hand, with the attempt of the Casado leadership to place leaders related to Genoa 13 at the head of the territories. The Andalusian PP leadership feels victimized by an “inexplicable organic power struggle” before the maneuvers attributed to the national secretary general to try to gain control of the popular Andalusians, which were staged at the congresses held in Malaga – at the beginning of the month – and in Seville – last Saturday. In the latter, the differences over the election of the provincial president, Virginia Pérez, akin to Casado, among accusations of irregularities, led Moreno Bonilla – a supporter of another candidate, the mayor of Carmona, Juan Ávila – to plant García Egea in the provincial congress, which the president of the Board decided not to attend.

In the ranks of the PP there is also a growing runrún about an alleged intention of Genoa 13 and, specifically, of Teodoro García Egea himself, to initiate a process of succession to the head of the party in Castilla y León to expel the current regional president, Alfonso Fernández Mañueco, considered from a more moderate sector than that of the national leadership of the PP. All this despite the explicit support that Casado gave him last week, once the motion of censure against him failed.

All these maneuvers by the secretary general, together with the advancement of the elections in the Community of Madrid, would be among the reasons why, according to popular leaders consulted by this newspaper, no progress has been made in the transfer of headquarters announced by Casado on 16 February, and that at that time it was tried to sell as an immediate move.