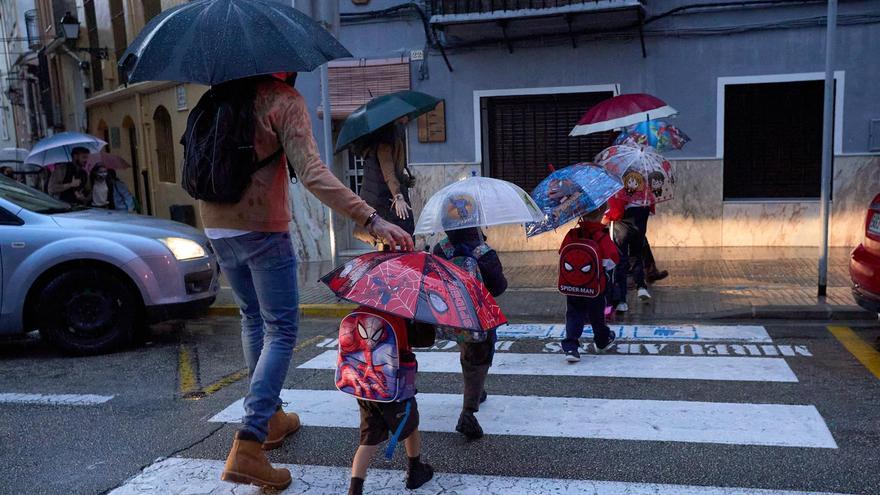 “Intense, persistent and generalized” rains will be the keynote for this long weekend of Todos los Santos, due to the arrival of successive Atlantic fronts to the peninsula that, fed by winds of subtropical origin, will form an atmospheric river loaded with rainfall.

A few days “passed by water” are expected, said Rubén del Campo, spokesman for the State Meteorological Agency (Aemet), who points out that with this episode of abundant rainfall, an October that was being very dry in the whole will end. from Spain, where it had only rained a quarter of normal.

This Friday the rains will already be more intense and lasting in points of Extremadura, Castilla y León, Castilla-La Mancha, Galicia, Andalusia and Aragon, where the Aemet has activated the yellow warning (risk) for rainfall that will leave 15 liters per square meter in an hour or 40 liters in 12 hours.

The passage of the very active Atlantic fronts will also favor strong gusts of wind today in mountain areas of the north of the peninsula, in addition to a “marked drop in temperatures” in much of the country, notable in parts of the southwest.

By provincial capitals, the warmest Friday will be in Granada, with 25 degrees, followed by Alicante, Almería and Castellón, with 24 degrees, and between 21 and 23 degrees in Seville, Murcia, Malaga and Cádiz, among others; in the center, Madrid will barely go above 16 degrees, while Ávila and León, the coldest, will stay at 14 degrees.

On Saturday Atlantic fronts will continue to arrive to the peninsula fed by the atmospheric river, which will again translate into “intense and widespread rains”, especially in Extremadura, under an orange alert (significant risk) due to rains of up to 90 liters per square meter in 12 hours in the Gredos area.

In Andalusia, Aragon, both Castiles, Catalonia, Galicia and the Community of Madrid the yellow warning has been activated practically all day, for accumulations of 15 liters in one hour or between 40 and 60 liters in 12 hours.

That day the maximums will rise in a generalized way due to the influence of warm air from low latitudes, and thus Valencia and Murcia will mark 26 degrees. At night, the minimums will also rise throughout the country, although with slight decreases on the Cantabrian coast and in the eastern Canaries.

On Sunday a very similar situation is expected with widespread and strong and / or persistent rains in southern Galicia, north of the southern plateau, south of Castilla y León and mountainous areas of Andalusia; In the Mediterranean area, weak and dispersed and unlikely in the Balearic Islands, the southeast of the peninsula and Melilla are expected.

During the Sunday session, the maximums will rise in the east, in the Balearic Islands and in the middle of the Canary Islands, without changes in the rest and with a high probability that they will exceed 30 degrees in areas of the southeast.

On Monday, the feast of All Saints, it will begin to “decrease the extent and abundance of rainfall.” Even so, they will still be abundant in the southern plateau, Andalusia, the Strait and the Pyrenees, the spokesman has detailed, to emphasize that temperatures “will drop sharply” that day.

As of Tuesday, the rains will be concentrated in the northwest of the peninsula and in the Strait, and during Wednesday in the extreme north of the peninsula, mountains in the center and southeast and the Balearic Islands, and may be in the form of snow in the Pyrenees and the Cantabrian mountains.

Rubén Del Campo stressed that, in the middle of the week, “the values ​​will continue to decline sharply in the Peninsula and the Balearic Islands” with frosts in the Pyrenees and in the other mountainous systems of the northern half.

From Aemet they point out that, given some uncertainty associated with this episode, especially in the distribution of the most intense rainfall, it is advisable to monitor the updated predictions on their website.