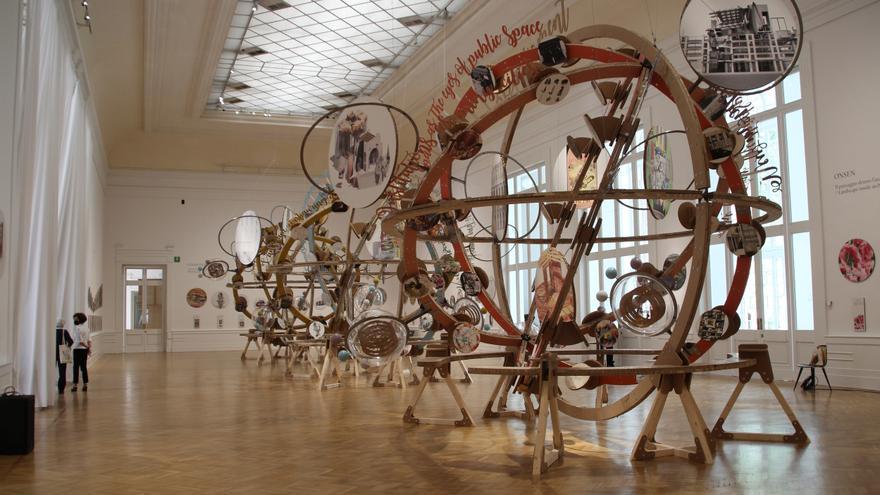 Rome, Jun 21 (EFE) .- The exhibition “Cosmowomen. Places as constellations”, curated by the Spanish architect Izaskun Chinchilla Moreno and inaugurated today at the National Gallery of Modern and Contemporary Art in Rome, offers “new visions of the world” that they are committed to the professional and academic integration of women.

A selection of 71 projects and 283 renderings and drawings by 65 architects from around the world is articulated through three large spheres inspired by the Ptolemaic system and the ancient theory that held that the Earth was the center of the universe, explained this Monday the director from “La Galleria”, Cristiana Collu, at the presentation of the show, open until October 10.

Each sphere is dedicated to an environment that has had historical importance in the segregation and exclusion of women from spaces that range from the most intimate to the public and political.

The projects that make up the first sphere, called “Gineceo” – like the part of the house in which women lived in Ancient Greece – reflect on the places destined for domestic life, with the home as the center of the relationships of solidarity and complicity, but also as an instrument of control over women.

Among them, projects such as that of Shi Yin Ling, based on the circular economy, or that of Yan Ting Li, which proposes to introduce some residential units in a hotel in Ibiza as a “resilience strategy” in the face of tourist overcrowding.

“Onsen”, the sphere focused on the relationship with nature and the landscape that takes the name of the Japanese thermal baths, brings together proposals that go from the collective landscape in a town on the outskirts of London to the Temperate Chocolate Park of Venessa Yau, made with cement with 30% cocoa beans.

For example, Christia Angelidou’s project seeks to “restore peace” in Cyprus through places where Greek and Turkish communities can “recognize shared ties.”

Izaskun Chinchilla, who runs her own architecture studio in Spain, is a professor at the Bartlett School of Architecture (University College of London), one of the most prestigious centers in Europe.

The 65 women who participate in “Cosmowomen. Places as constellations”, coming from about twenty countries, have studied at the Bartlett School in the last ten years.

Young women like them, according to the director of “La Galleria”, are the ones who must work for the total integration of women through architecture.