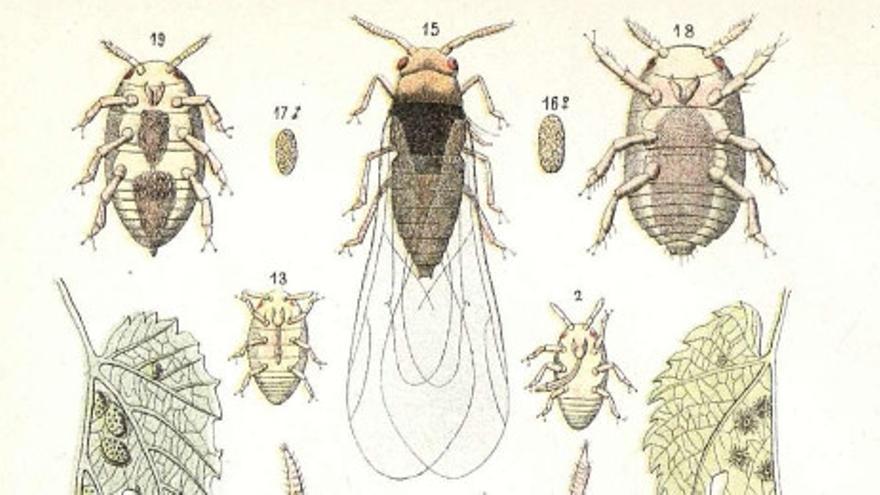 Like a small stowaway, he only had to hide in a plant that was going to make a transoceanic trip: to the phylloxera, lacking the glamor of a butterfly, it did not even need to flap its wings to cause an earthquake with unthinkable consequences for the economy, the landscape and the way of life of millions of people in countries around the world.

If you have to choose a year that marks a moment of true splendor for the French vineyard, it would be 1855. That year the first official classification of wine is known. Bordeaux wines and Jules Lavalle publishes his own on those made in the Côte d’Or de Burgundy. Around this time, the situation also began to get back on track after a decade fighting powdery mildew, until then the disease that most concerned French winegrowers and the rest of Europe. Less than ten years later, an insect of barely half a millimeter began to calm that euphoria, until it completely changed the panorama of world wine production.

The context that led to the arrival of phylloxera from North America is the fight against powdery mildew, a fungus that was first detected in 1845, which in 1852 was already widespread in vineyards in all European countries and for which the solution was found. in 1855: sprinkle the vineyards with sulfur. The problem was controlled, but part of the vineyards were weakened. Some winegrowers decided to bring from North America plants more resistant to this fungus, without suspecting that the remedy would bring another disease: the one caused by phylloxera, unknown until then because on the other side of the Atlantic it had caused almost no problems.

The insect came by boat, probably hidden in those vines, and found its first home in the Languedoc. The first outbreak is documented in Pujault, in 1863. Flying, attached to the winegrowers’ boots or digging tunnels in the ground, the phylloxera spread and found perfect places to reach the roots of French vineyards and leave them completely dry. From there, it was unstoppable. Two years later, the consequences of this disease were already noticeable in the Rhone. In 1866 he reached Floriac, 7 kilometers from Bordeaux and 40 from Saint Emilion. It expanded over the next few decades. First for France, then for the rest of Europe and even for the new world, with the assurance of knowing herself unknown and, for years, invincible.

In 1868 France created a study commission to investigate why vineyards died without apparent remedy. There was no rot, nor did they detect the tiny insect: they could only certify the disaster. It also did not work to take the Virgin in procession, as they did in Pauillac when they no longer knew what to expect. The action of phylloxera causes a kind of lump on the leaves of the vines and, worst of all, attacks the roots, parasitizing them, until leaving the plants dry, which came to despair of winegrowers and scientists. The treatments that were tried for years (flooding the vineyards, application of carbonate sulfide, among others) only served to slow down the degenerative process of the vineyard and delay its death. At the end of the 19th century, more than 2 million hectares were affected by phylloxera. Wine production plummeted, from 56 million hectoliters in 1870 to just 27 million in 1895.

In the Iberian Peninsula, three entry points of the insect have been recognized since 1878: Girona, due to its proximity to France, and the ports of Malaga and Oporto. He found hardly any barriers, except for a mountain system without vineyards that delayed his arrival in some areas. This was the case of Jerez, where phylloxera arrived 26 years later than it did in Malaga, although it inevitably ended up also affecting the vineyards planted in albariza. In 1889, 1.7 million hectares of Spanish vineyards were affected. There were places where the insect affected later, such as Cariñena, Jumilla or Rioja, and it was to this last area that French merchants turned their eyes in search of another market, because France never stopped consuming wine.

The abandonment of more expensive production vineyards and the creation of wineries – now mythical – in the neighborhoods of Haro or Cenicero stations were a direct consequence of that situation. In fact, many of the Spanish producers began to apply industrial processes to the elaboration of their wines and began to make aging in barrels, until then an almost anecdotal custom.

1891 was the last boom year for Spanish exports. France had already given a name to the phylloxera problem and had begun to solve it by grafting the standing plants of origin of American vineyards and the French authorities began to impose tariffs on the import of wine. That year, Spain produced between 9 and 11 million hectoliters of wine. Three years later, the production was just over 2 million. Phylloxera had made its own way in the Iberian Peninsula and, in fact, the crisis it caused was not considered over, with the reconstruction of the vineyard, until the 1950s.

Throughout the phylloxera crisis, several commissions tried to find a solution to the gradual death of the vineyard. Several treatments are tried (among them carbon sulfate diluted in water and injected at the foot of the vines or the flooding of the vineyards) without success. They are only applied on farms that can afford it and only weaken the plant and delay its death. Jules-Émile Planchon, botanist, travels to the United States to study why American strains are resistant to the insect and is correct in advising against replanting them in Europe. But it is another botanist, Alexis Millardet, who finds the key with a fundamental study, which was based on the feet of the vineyards and their adaptation to different soils.

Millardet, who already had a certain prestige in the sector because he had found a remedy to end the powdery mildew plague a few years earlier, was the one who advised grafting European strains onto American feet. Radical, but the only solution: sooner or later, almost everyone’s vineyard was uprooted and grafted in order to survive. The proposal was not enthusiastically received by the wine world: many producers were reluctant to uproot their plants and graft them onto American foot for fear that the wine would lose the quality for which they had become known. Although not all took as long to decide as the emblematic Domaine de la Romanée-Conti winery, which agreed to replace the feet of its precious vineyards in 1945. Only eight years later was the reconstruction of the vineyard in Spain completed.

All over the world?

The development and reproduction of this insect was a complex enigma to solve for the researchers. It spread like an oil stain, apparently by different means, but what seemed to favor its proliferation were the calcareous soils. That is, a large part of the soils where the vines were planted, except in places like the Canary Islands or Chile, where a more sandy terrain and its isolation by mountain ranges prevented the development and action of phylloxera. In addition, the Andean country benefited, like other South American countries, from the arrival of Spanish emigrants who collaborated in the development of its flourishing vineyards. However, the insect has encountered insurmountable barriers, but it is still active: the ban on planting vines in free standing remains in force and in areas such as Chile the introduction of any foreign vine has been prohibited since 1877.

It wasn’t just the wine

The plague caused several crises that extended beyond the wine sector in more than half the world: in France, for example, phylloxera is understood as an ecological crisis, with the disappearance of one of its emblematic plants as it was known until then . It also meant an economic and human crisis, with a drastic change in a way of life. In Spain, phylloxera caused the disappearance of entire wine-growing areas for decades, such as Priorat, leading thousands of people to emigrate due to the lack of future prospects and the lack of support for the sector. Low-yielding vineyards with complicated viticulture were abandoned and the situation implied the practical disappearance of many indigenous varieties.

In replanting with American foot, many areas gave priority to plants with more profitability. Within the framework of Jerez, for example, Palomino or Perruno were prioritized, but varieties such as Caloña or Cañocazo stayed on the road. And one of the most obvious consequences of phylloxera is that it shortened the life span of the vine, which went from being an almost perennial plant (in Slovenia there is evidence of one that reached 450 years) to expiring in several decades. Vineyards that had survived centuries of droughts, floods, glacial winters and disease, were on the verge of succumbing to an almost invisible enemy.