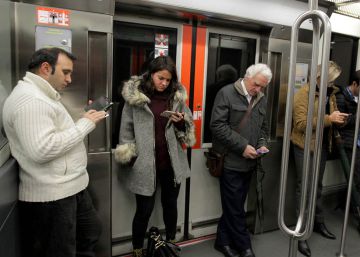 He National Statistics Institute (INE) begins this Monday, day 18 the follow-up of millions of mobile users from all over Spain in a campaign that will take place eight days in order to obtain information on the displacements of the Spaniards and their favorite places of vacations.

In this first phase, from November 18 to 21, the public body tries to know the typical movements of citizens on a business day. To do this, he has asked the three collaborating telephone operators (Telefónica, Orange and Vodafone) to provide information on the position of the mobiles in areas of 15,000 inhabitants on average.

This is anonymized information, that is, the companies offer the position of the mobiles but not the owners of the line, and then add that data and provide it to the INE.

For this, the position of the mobiles will be taken between twelve at night and six in the morning each day, to establish the place of residence. And between nine in the morning and six in the afternoon, the flows of people will be examined, from which cell to which cell they go to work or study. To qualify as a daily destination, the INE considers that the mobile will have to be present in the same location at least four hours in two of the four days.

In a second phase, the INE will try to verify travel on holidays and vacations. In this case, it will take samples on Sunday, November 24; On December 5th; and two days of summer, on July 20 and August 15, also a holiday.

Although it is a legal practice, which is about avoiding personal interviews, much more imprecise because they depend on the testimony of the respondent, many consumer organizations have expressed their protest.

There are methods to sneak out of the study. The most effective and radical is to turn off the mobile or put it in airplane mode. Disabling the location alone is useless because the information is collected through the cells of the mobile network, not the satellites.

In addition, companies have mechanisms that allow managing the transfer of data. First, the subscribers of the MásMóvil group and all its brands (MásMóvil, Yoigo, PepePhone, Lebara and LlamaYa) have nothing to worry about because they do not participate in the study. Neither does the Romanian operator Digi.

Those who are in a worse situation are those of Movistar that does not provide its customers with any type of mechanism to manage this type of authorization. Vodafone and Orange do allow their customers to decide if they transfer information to third parties, even anonymously.

In Orange you have to use the mail, sending a letter to the company's headquarters with the reference "data protection" or via email orangeproteccion.datos@orange.com. The company has not confirmed whether only Orange subscriber data will be provided or customers of other brands such as Jazztel, Simyo or Amena that also belong to the French group will be included.

In any case, the three main companies wanted to clarify that the transfer of these data does not violate the current legislation, since they are "highly aggregated" (summarized), in the words of Telefónica. The National Statistics Institute will pay half a million euros to the operators for the data: it will pay 163,616 euros to Telefónica, 150,000 to Vodafone and 185,000 to Orange.