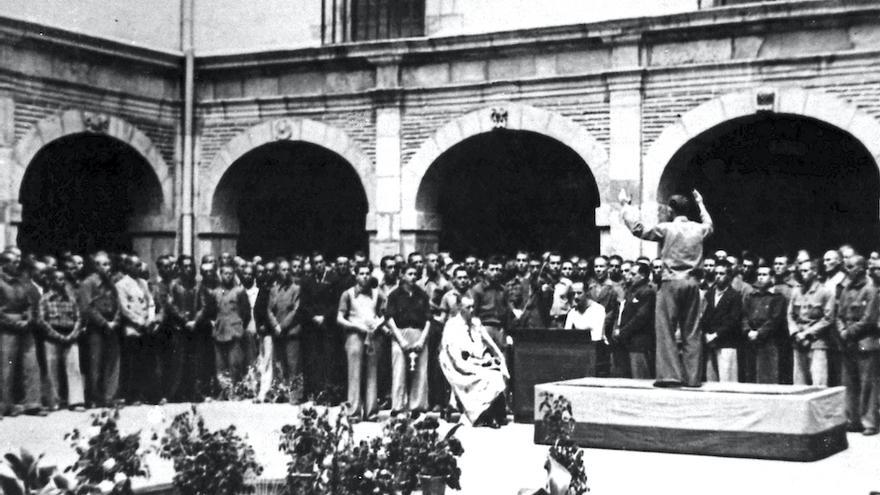 Wilfried Stuckmann lit the flame. He did so with the gasoline of foreign surprise and indignation that Spaniards so often lack. The beginning of this story should be placed in the Easter holidays of a German tourist in April 2014. Wilfried and his wife walked the Cantabrian coast and decided to spend two nights in San Marcos, the impressive Parador Nacional de León . What did the Stuckmanns know about that place before they arrived? What they had read in the Booking reservation center: the exalting Renaissance beauty of the building, its original conception as a convent, the decoration with lavish furniture and tapestries, and the rooms with free Wi-Fi. Not a single mention of what, once there, aroused a deep repulsion.

On their first day in the city they watched the processions and, at nightfall, they had a drink in the Plaza Mayor and went to sleep. The next morning, they visited the cloister of the old monastery and read the information that was provided about the building, such as that in the 16th century, it was the prison in which the illustrious Spanish poet Francisco de Quevedo was imprisoned. It was not until they searched further, noting as only idle visitors look, that at the back of the cloister they found some posters explaining that it had been a concentration camp between 1936 and 1940, during the Spanish Civil War. and something beyond.

"We were in shock," he confessed to this newspaper at that time, which said that his anger at the absence of such relevant data as that on the reservation platform, prompted him to write a comment of complaint. The surprise continued to increase when it was found that the publication of the comment was rejected because the site's use policy prohibits leaving comments that make allusions to the wars. Stuckmann continued to make claims, claiming that he would never have stayed in a place where people had been humiliated and mistreated in this way, had he known. The company preferred to return the money for his accommodation rather than publish his words. The tourist decided to donate those 396 euros to the Association for the Recovery of Historical Memory (ARMH).

Wilfried's little gesture made his story big and many more people, not those who come and go but those who step on the same ground every day that they stepped on eighty years ago, began to see what was in front of their noses: the Parador de Turismo de León had been a concentration camp and nothing seemed to remember it. Those who did remember were dying, and were often silent. Seven years later, an explanatory panel has been installed that did not exist before and homage has been paid to the prisoners of those walls, with the presence of the oldest of them, Josep Sala, 101 years old. However, neither the Booking page nor the Paradores page warns travelers that around 20,000 Republican prisoners passed through there and that between 1,500 and 2,900 died from disease, mistreatment or murder.

On the other hand, the plate requested by the ARMH is not such, but the aforementioned explanatory panel, which the president of the association, Emilio Silva, considers that it is too small and badly located. "This plate is microscopic and is behind a door that is closed, so it is only visited if specifically requested by a client," he says. Silva recalls that Antonio Gamoneda wrote a manifesto for the collection of signatures that was titled A door to memory, "but they have put a closed door," he adds. Behind that closed door, there is also the sculpture made of talcum stone and an iron plate that until now was the only memory of the concentration camp. It is part of the León Museum and is accompanied by Quevedo's text: "I live in conversation with the deceased and I listen to the dead with my eyes" and a dedication to "those who suffered imprisonment, torture and death in San Marcos during the Civil War ( 1936-1939) ". A tribute that Emilio Silva, whose association was born in León, in Ponferrada, does not like either: "It does not say who suffered prison or who repressed them, and it talks about Civil War but in León there was no Civil War", as the journalist Olga Rodríguez recalled in his intervention: "There was no Civil War because the coup triumphed a few hours before the beginning nor were there any opposing sides. There was a systematic persecution against those who thought differently from the Francoists, a plan studied to eliminate those who had certain political ideas and murdered for not supporting the coup ". For all this, the ARMH is going to make a complaint to Paradores so that the information board is located in a place of passage, so that it is more visible and that a paragraph about the concentration camp is included on the official website of this hotel in luxury.

During this time, Wilfried has followed the activities of the ARMH and learned again that nothing had changed in the Parador de León when elDiario.es contacted him in December 2020. At that time, he said he was willing to do another donation to get the plaque the Association had been asking for for some time to be installed, including a signature collection spearheaded by well-known literati. "I knew that the Parador was going to be renovated and that an attempt was being made to erase the memory of fascist crimes," he explains to elDiario.es from Berlin after the celebration of the tribute.

"It is a great shame that the Parador does not make official reference to its past," says Stuckmann regarding the lack of information on the Paradores website. At this week's event in San Marcos, in which, in addition to Josep Sala, the poet Antonio Gamoneda, the former president of the Government José Luis Rodríguez Zapatero, the director of the Cervantes Institute Luis García Montero and the journalists Olga Rodríguez and Carlos Hernández, did the presentation Óscar López, president of Paradores. López said: "At Paradores we do not hide the story." That the information about the concentration camp is collected on the web is a request that the ARMH has also been making at this time. "We would never have stayed in a place like that, had we known," says Wilfried. There is information that is not easy to obtain, as Carlos Hernández said during the tribute, "the history of San Marcos is well known in León but very unknown in the rest of Spain", but not that difficult either, since Hernández is the author of the book Franco's concentration camps: Submission, torture and death behind the barbed wire. There were more than 300.

In his presentation, which was followed by the streaming media since it was made only for a small group of guests, Óscar López spoke that this was "an act to recognize the people who suffered because of what they suffered", in a building "It has a lot of history and therefore not all of it is positive, obviously." "Today he dedicates himself to much more positive things than he did in the past," he added. And he said goodbye dedicating the event "to the memory of Josep Sala and the thousands like him who lived what they lived in these four walls". A few minutes later, in his speech, Carlos Hernández asked the people who are staying at the Parador to "enjoy but with memory" and that "history is never again hidden, much less the history of the victims of places like this , Under the carpet".

Carlos Hernández describes the San Marcos field as one of the most "lethal and terrible" of the 300 that existed. Zapatero, in his speech, replied saying that he regretted that Spain "did not notice that there were hundreds of concentration camps," with "people who were imprisoned, who were shot or who simply disappeared." Hernández, forceful in his intervention, indicated that it was necessary to "remove from oblivion a page ignored in history and educational books and that is that in Spain there was a system of concentration camps, which is not a subjective definition, but rather That's what the Francoist troops called him and that's what the dictatorship called him when the war ended. " A system of camps and battalions through which nearly a million prisoners passed, mostly men. "There was selective extermination, investigation of the prisoners so that none were left without purging, labor exploitation to carry out forced labor throughout Spain," he adds. San Marcos "was a punitive and reeducation place, where they wanted to brainwash them after having defeated them on the battlefield."

Wilfried Stuckmann is learning Spanish and hopes to return from a trip soon. He has followed the reactions to his little crusade and also the comments on Twitter from relatives of prisoners who have made visible the stories little by little forgotten. "On the other hand, I continue to be of the opinion that the Parador de León should not be a hotel, but exclusively a place of memory," says Stuckmann, whose eye is trained not only by distance but also by being German. "It may be that in Germany we care more than in Spain the historical revaluation of fascist crimes," he says. "Perhaps, but also in our country, retrograde voices are once again trivializing the crimes of the fascists. All of us, in all the countries of the world, must not give up our efforts to keep the memory of the crimes alive," he says.