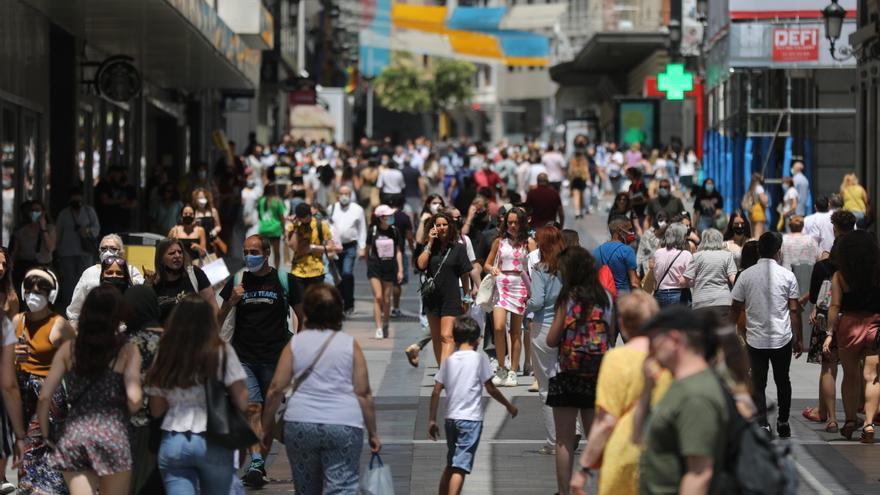 The general incidence at 14 days has climbed again this Friday and stands at 152.82 infections per 100,000 inhabitants. Spain thus places itself at high risk incidence levels, a barrier from which it had dropped on May 18. Yesterday it was placed at 134.31 points. The curve continues to be especially accelerated in young people between 12 and 30 years old, who register levels above 400 points, with Cantabria and Catalonia shooting above 1,000.

The general incidence rises in all the autonomous communities and in Ceuta. At this point, Cantabria and Catalunya are also in the lead, with 296 and 242 cases respectively. There are only four communities left below the barrier of 100 infections per 100,000 inhabitants.

The Ministry of Health has reported in its latest daily report 12,563 new infections registered in the last 24 hours, a slight increase compared to Thursday, when 12,345 were reported. In total, 3,833,563 people have been infected with COVID-19 since the start of the pandemic.

Catalonia, with 5,127 cases; Cantabria, with 1,017; and Castilla y León, with 603; They are the communities that register the highest number of new infections in the last 24 hours. The cases notified by the autonomous communities has doubled in a week (105%).

Authorities have also reported 28 deaths, bringing the total number of deaths from coronavirus in the pandemic to 80,911. It represents a significant rise compared to Thursday, when only 8 deaths were added.

The number of hospitalized for coronavirus is maintained. Those admitted to conventional beds decreased slightly, but ICU patients increased by two due to this pathology. The occupancy of intensive care beds with COVID patients is 6.39%. In the last 24 hours there have been 362 admissions and 287 registrations.

Spain has broken a daily vaccination record for the second consecutive day after administering 765,399 doses in 24 hours. On Thursday, 747,589 injections of some of the available COVID-19 vaccines were inoculated. With this, 38.9% of the population is already fully immunized, more than 18 million people.

In total, the autonomous communities have administered 42.7 million doses and 54.7% have received at least the first puncture, almost 26 million people. The campaign continues apace thanks to the arrival of unprecedented amounts of doses in recent weeks, which brings Spain closer to the goal of vaccinating 70% of the population with the full regimen before the end of the summer.

The macro shoot of Mallorca it has been the largest focus registered in Spain throughout the pandemic, that has left more than 1,800 positives, 5,000 travelers in quarantine, 14 hospitalized and at least one case in ICU. In addition, the Primary Care services will have to keep track of all family contacts and infections, which are rebounding clearly. A trend that is not exclusively due to the outbreak of the Balearic archipelago.

The most media case of the year has coincided with a sharp rise in infections between the ages of 10 and 29. Spain has registered this Thursday the worst contagion data since February 18, in the middle of the third wave, with 12,345 new positives. The Ministry of Health has begun to publish the incidence by age groups, something that has been requested for months and that now serves to more accurately measure the scope of the pandemic.

In just three days, the cases of the 20-29-year-old cohort have increased from 251 per 100,000 inhabitants to 367. The same has happened with the lower age group, from 12 to 19. On Tuesday it was around 240 cases and already it reaches 345. Due to this, the national incidence has rebounded to 117 and has caused us to once again exceed the psychological barrier of 100 infections.