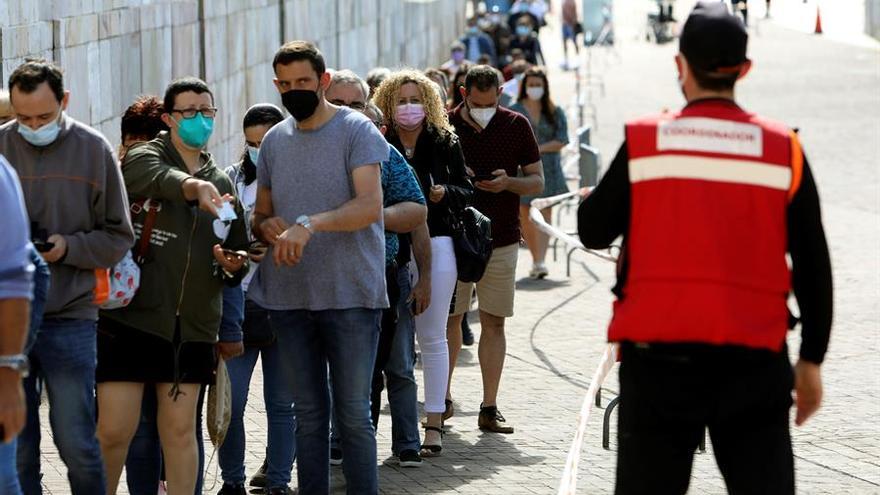 The 14-day incidence rate this Wednesday stood at 92.57 cases per 100,000 inhabitants, which is an increase compared to Tuesday. This is the first rise since the end of April and occurs as a result of the increase in cases in several communities, especially in the Canary Islands and Catalonia.

On Friday, April 23, the peak incidence of the fourth wave was reached, when 235.51 points were recorded, a figure that barely rose after that weekend. On Monday, April 26, this indicator stood at 235.59 and from that day on, a decline began that has been softening in recent weeks.

The incidence increases in nine communities in total: the Balearic Islands, the Canary Islands, Cantabria, Catalonia, the Valencian Community, Extremadura, Galicia, La Rioja and Murcia, reporting increases in this variable. The overall rise in the rate is due, above all, to the worsening of the situation in Catalonia and, above all, in the Canary Islands. This Wednesday, ehe island government has announced that it raises Tenerife to health alert level 3 after a "tremendously substantial" change in the trend of the pandemic in that territory.

The Ministry of Health has reported 4,341 new infections, a figure that contrasts with the 4,040 reported on Tuesday. In total, 3,773,032 people have been infected since the beginning of the pandemic, more than a year ago.

Andalusia, with 1,178 new infections, Catalonia, with 1,199, and Madrid, with 515, are the communities with the highest increase in cases in the last day.

The health authorities have also recorded 29 deaths in the last day, for the 30 notified yesterday. The global balance of deaths from coronavirus thus amounts to 80,748, of which 66 occurred in the last week.

The situation in hospitals continues to improve. The occupancy of ICUs with COVID patients is around 7.20% nationwide and all communities have already dropped 15%, thanks especially to the decline in Madrid. In total, there are 728 people in the ICU with coronavirus, while in conventional beds the number of admitted is 2,504. 2.04% of normal beds are occupied with COVID-19 patients. Over the last 24 hours there have been 265 admissions and 398 registrations.

Summer arrives and it does so with almost a third of the population living in municipalities with low incidences. More than 4,000 municipalities have detected less than 50 cases per 100,000 inhabitants during the last two weeks, which is the threshold below which the Health 'traffic light' considers that the risk of contagion is low. In addition to the good data, the trend is also positive: cases continue to decline in towns and cities where half the population lives. The towns with the best figures are mainly concentrated in the Balearic Islands, Galicia and the Valencian Community, where at least two out of every three inhabitants are already in this situation.

However, the indicators are not so favorable in most of Andalusia and Santa Cruz de Tenerife. Half of the Andalusian population still lives in localities that exceed 150 cases per 100,000 inhabitants, a reality also for 20% of the Canarian population, a situation that regional authorities are trying to reverse.