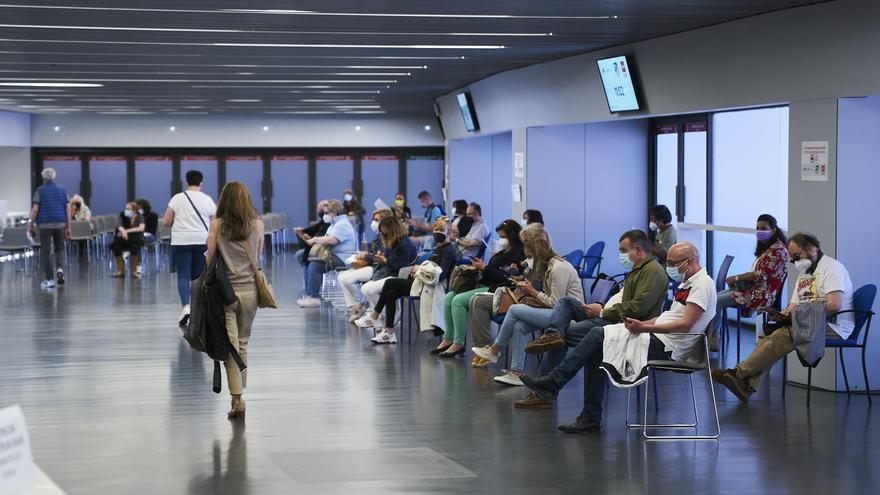 The accumulated incidence continues to fall, although this day it is only one point below Monday. There are 128.12 cases per 100,000 inhabitants in the last 14 days. This indicator remains down, and therefore the epidemiological situation improving, since the peak of the fourth wave of the pandemic, on April 26, when 235.59 cases were reported.

The Ministry of Health has registered 5,359 new coronavirus infections notified by the autonomous communities on Tuesday. It is a figure slightly higher than the 4,792 on Friday, the last day with which they can be compared because on Monday’s balance they are counted for the entire weekend, when all the communities left the maximum risk level, but less than the Thursday, when 5,733 were reported. In total, since the pandemic began, 3,652,879 people have been infected in Spain.

In the death box, the ministry directed by Carolina Darias incorporates 90 people. Since the beginning of the health crisis, 79,801 people with COVID-19 have died in Spain, 141 of them in the last week.

By autonomous communities, the ones that add the most new infections to the total balance are Madrid, with 1,387 more cases; Castilla-La Mancha, which totals 1,337; and Andalusia, which has reported 920 cases. Regarding the incidence, the Basque Country is the one with the highest rate, with 212.2 cases, seven less than the previous day, and Madrid, which with 202 per 100,000 inhabitants is situated in similar parameters to the previous day. This indicator rises, although in different proportions and phases of the epidemic, in La Rioja (146), Castilla-La Mancha (128, which is 52 points more than on Monday), Extremadura (83), Murcia (72) and Comunitat Valenciana (29.79).

Hospital occupancy continues to decline, although very gradually. It is Tuesday, the occupation of plant beds by COVID patients is 4.34%, with 5,412 people admitted. In the case of ICUs, occupancy reached 15.97%, with peaks in Madrid (34%) and Euskadi and La Rioja (26%). Currently, there are 1,552 patients with coronavirus in one of these intensive care units, 549 of them admitted in the last 24 hours, when another 715 have been discharged.

55% of people over 60 years of age have already received the complete vaccination schedule that guarantees maximum immunity. In this age group, 94.1% have at least one dose.

The autonomous communities have administered a total of 24,876,302 doses of some of the available vaccines against COVID-19, after the 342,000 injected during the last 24 hours. Thus, more than 8.2 million people already have the complete vaccine schedule, 17.4% of the population, while almost 17 million have at least the first puncture, 35.7%.

Spain has almost vaccinated all those over 80 years of age with the complete vaccination schedule, there are barely 7,000 people in this age group to receive the second dose of Pfizer or Moderna. The inoculation of the group between 70 and 79 years is also very advanced: 96.7% have at least one dose and 83.1% are fully immunized. Of the group of those between 60 and 69 years old, 87.9% have at least a first dose and 10.4%, the complete regimen.

The sea from the Canary Islands to Gibraltar absorbs 2.6 million tons of CO2 per year