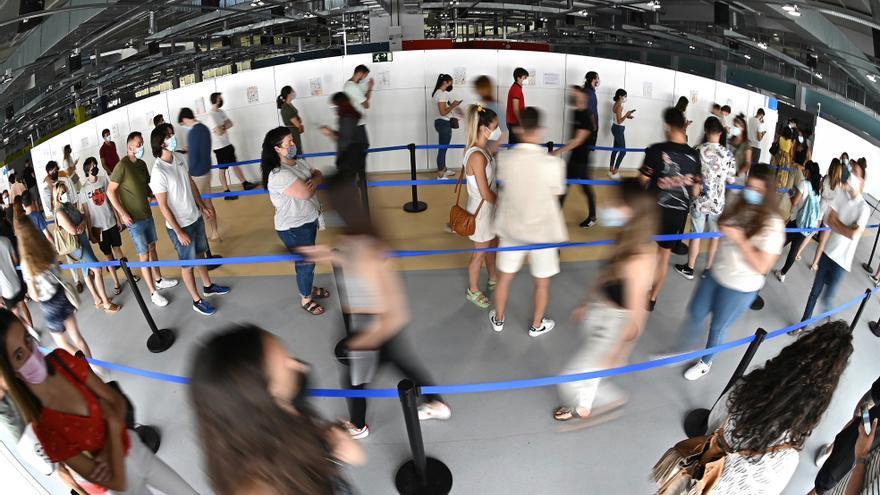 The cumulative incidence is now close to 600 cases per 100,000 inhabitants in the last 14 days and hospitalizations grow more than 65% in one week. In total, the Ministry of Health has notified this Monday 61,628 cases of coronavirus that correspond to the weekend and a total of 23 deaths with the infection. Since the pandemic began, there have been 4.16 million infections.

The communities that have registered the most cases since Friday are Catalonia, with 17,579 positives, Andalusia with 8,038 cases and the Valencian Community with 5,863.

The accumulated incidence continues to rise in the age group of young people between 20 and 29 years old, which stands at 1,794 cases; In the age group between 12 and 19 years, the incidence is located in 1,488 cases and it is somewhat lower in those between 30 and 39 years, which remains at 799.

This Monday there are 6,482 people with COVID-19 hospitalized, which is 65% more than last Monday. In addition, there are currently 5.42% of beds occupied with COVID patients and 1,039 are in intensive care units.

This fifth wave begins in the richest neighborhoods linked to leisure, although the transmission speed is so high that the impact begins to be felt also in humble areas. The infections in Madrid and Barcelona have begun in affluent or central neighborhoods, the data points out, a trend that has to do with tourism, the population that can afford to go on vacation or pay for nightlife.

Last week, several communities asked the Justice to establish curfews in their territories due to the advance of infections among the young population. The Balearic Islands have just announced that it prohibits social gatherings between 01:00 and 06:00 hours, but finally does not harden the use of the mask.

More than half of the population, with the complete guideline

50.7% of the Spanish population is already vaccinated with the complete guideline against the coronavirus, that is, more than 24 million people, according to the data provided this Monday by the Ministry of Health. In total, 51.2 million doses have been delivered and 29.4 million have at least one injection so far.

It is a new milestone in vaccination in Spain, which hopes to have vaccinated 70% of citizens before the end of the summer. Last week, Spain was among the 20 countries in the world with the most vaccines administered per number of inhabitants. Although some countries such as the US, the United Kingdom or Israel took the lead at the beginning of the campaign thanks to the greater availability of doses, the rate of administration in these countries has slowed in the last month.