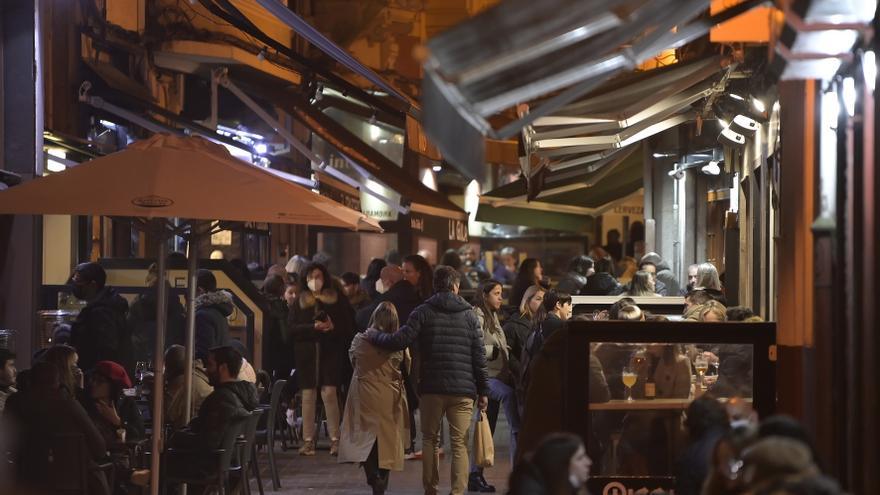 The curve of the sixth wave continues to decline. This Monday the incidence of the coronavirus falls 217 points after the weekend, reaching 1,244.44 cases per 100,000 inhabitants. It is still in the 'very high' contagion range, according to the Health criteria, but it already marks a clearly downward trend, with fewer and fewer daily infections. In addition, hospital pressure decreases, and the occupation of beds by COVID patients is already out of the 'high' risk.

Since Friday, the Ministry of Health has registered 68,706 positives, while this Friday 49,004 were reported infected with COVID. In total, 10,672,906 people have been infected since the beginning of the pandemic in Spain.

The hospital occupation is already out of the 'high' risk. The percentage of beds occupied by COVID patients drops from 10.31% to 9.8%, with which the risk is now in the 'medium' range, according to the COVID Traffic Light. It also lowers the pressure in the ucis slightly.

After the weekend, 601 deaths from COVID-19 are added. Since the epidemiological situation began in the country, Health handles the figure of 96,596 deaths. This increase is due to the accumulated sum of deaths not previously notified by some autonomous communities, as is the case of Catalonia.

Evolution of the cases and deaths reported, those hospitalized and those admitted to the ICU each day, the variation in the last 7 days and the comparison with the peak of the 3rd wave of the pandemic

The incidence by age groups is becoming more and more equal, although people between 50 and 79 years of age have a rate of less than a thousand cases, which is lower than the national average.

As for the autonomous communities, the incidence shows a greater variation by territory. Three regions report less than a thousand cases per 100,000 inhabitants: Andalusia registers 539 cases; Madrid, 883; and Castilla-La Mancha, 961 cases. The new cases would be distributed as follows: Comunitat Valenciana registers 11,863 since Friday; Catalonia, 11,622; and Galicia, 7,115 positives after the weekend.

92% of people over 60 years of age already have a booster dose against COVID-19. In total, almost 23.5 million people in the country have this immunity boost to deal with the disease caused by the coronavirus.

The booster doses began to be administered to the elderly and those with immune problems, so that not all age groups have the same percentage of coverage of the third dose. While those over 40 years of age already have 78.2% of the inhabitants with the booster vaccine, this dose in people between 20 and 29 years of age has been applied to 27%.

Meanwhile, children between the ages of 5 and 11 continue to receive their first injections. 56.3% of this group has at least one anti-COVID dose.

Regarding the general population, 91% of those over 12 years of age have the complete regimen, while 92.8% of these people have at least one dose.

Immunity, good weather and omicron promise a period of calm in Europe after the storm of the sixth wave

At this point, no one dares to say that there will never be a wave like the sixth. Nor that this was the last. We do not yet know if COVID-19 will end up being a winter (seasonal) disease or if the peaks and valleys will occur throughout the year; Nor with what intensity. But in the short term, at least, the coincidence of three elements suggests that a "long period of tranquility" is beginning. That, after the storm, calm comes.

It is the forecast with which the World Health Organization works in the European region, which conceives the coming months as "a unique opportunity" to control the virus due to the high immunity of the population after an explosive wave of infections and access to the third doses; due to the rise in temperatures once winter is over, which will favor outdoor activities; and by the lower virulence associated with the omicron variant, the dominant one in Europe.